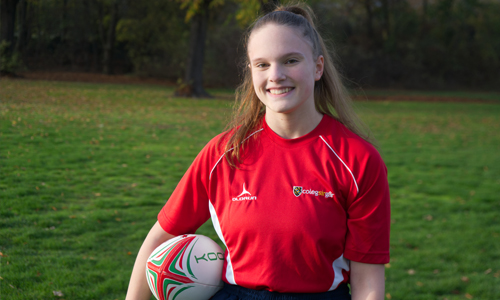 A Coleg Sir Gâr rugby jersey has made its way to Germany to help an overseas student reminisce about her time at the college’s rugby academy which was cut short due to the pandemic.

Annika May, who is from the south-west of Germany, was studying AS-Levels when the coronavirus struck.

She was inspired to take part in the girls’ rugby academy after her friend told her she enjoyed playing rugby as part of an Irish exchange programme.

Annika May said: “When I heard there was a team at the college, I really wanted to try it out as I’d never played it before.

“I like trying out new sports and thought rugby would be really cool, especially as it’s so popular in Wales.

“A big thank you to Euros and his team for all the support and for showing me a new sport which I am also learning to play in my local rugby club, SVF Rugby Ludwigshafen, who are really supportive.

“I’m so happy I had the opportunity to play with the Steelers team.”

Annika asked to buy a college jersey as it would represent very fond memories for her, so the rugby academy was delighted to send her a complimentary playing shirt and training top.

Euros Evans heads the rugby academy at the college, he said: “Annika was in the squad for Rosslyn Park but unfortunately, the virus hit us and the end of her rugby experience was cut short.

“She was a fully-committed player who never missed a session, she quickly learned the principles of the game and was a member of girls team that participated in the WRU regional 7s tournament.

“It’s a shame the coronavirus cut short her rugby experience but I hope she can continue playing back in Germany.”