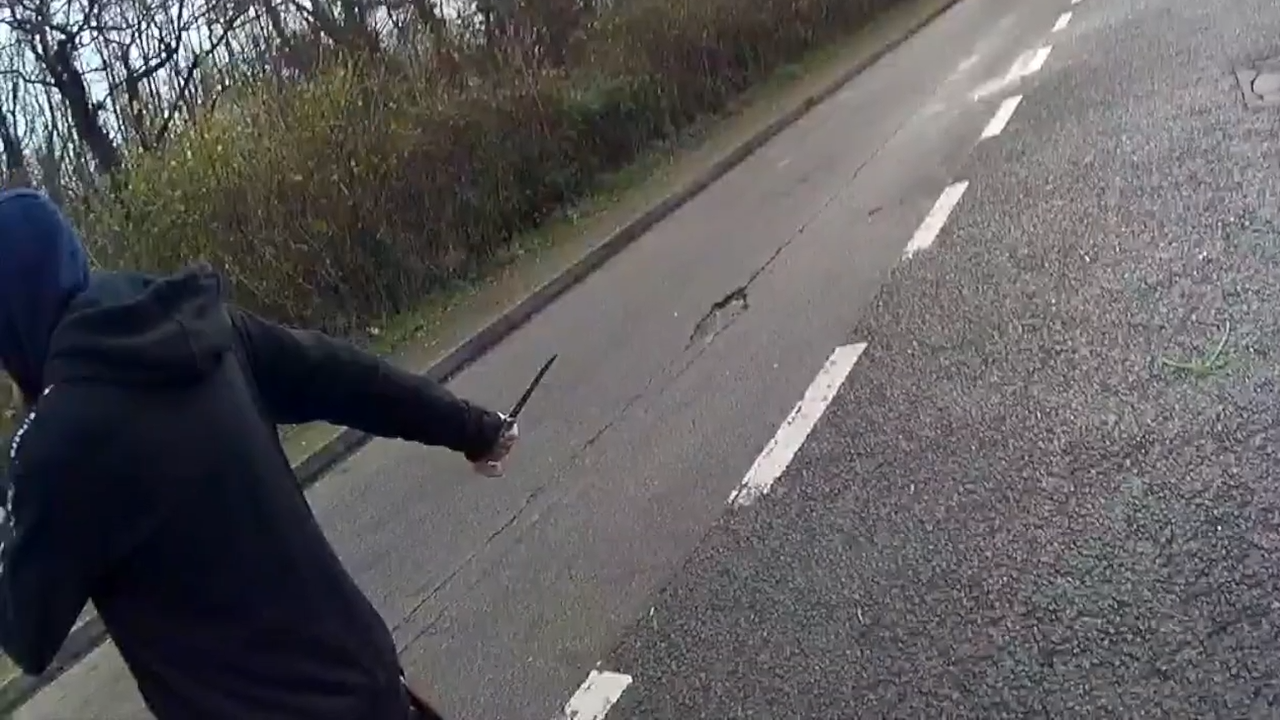 A police officer who found a high risk missing person, only to be threatened with a knife, has spoken out to highlight the dangers he and his colleagues face.

Dyfed-Powys Police PC Mark Thomas was fortunate not to be injured during the incident, but says he should never have been subjected to the threat of harm by the person he was trying to help.

The Roads Policing Unit officer was on duty on November 16 when he was tasked to help look for Jack Griffiths, who had had been reported missing a short time earlier and was believed to be walking along the A48 near Cross Hands.

As PC Thomas pulled into a car park, he noticed a man matching the 18-year-old’s description, and called over to check if he was ok.

Fearing for Griffiths’s safety being so close to the dual carriageway, the officer approached to check if he was ok. But he couldn’t have anticipated what would happen next.

“As I was within reaching distance, he started running and withdrew something from his clothes, “PC Thomas said. “I didn’t immediately realise that it was a silver kitchen knife.

“As I got closer, he turned towards me and swung the knife at me in a slashing motion across my chest. I would say this was inches away.

“I pushed him to the floor to try and stop him, and he fell to the ground, swinging the knife at me again – this time slashing across my shins.”

Concerned he had been injured, PC Thomas stopped, and his colleague PC Leighton Webb continued the chase.

Griffiths made off over a fence, and due to the risk PC Thomas believed might have been posed to other members of the public, he deployed his taser.

He was arrested by PC Webb, who waded into a river to reach him.

Fortunately, PC Thomas sustained minor injuries during the incident, and was able to remain on duty – but he is aware just how different the outcome could have been.

“Now I have had time to start to process this incident I can’t quite believe what happened,” he said

“I’m thankful that the knife Griffiths used to assault me wasn’t sharper, or he could have seriously injured my legs and chest.

“I dread to think what some of the potential consequences of this incident could have been.”

Griffiths was charged with threatening a person with a blade/sharply pointed article in a public place, and was sentenced to 18 weeks in prison, suspended for 12 months. He must complete a rehabilitation requirement of 20 days, pay costs of £85, a victim surcharge of £128 and compensation of £200.

Following sentencing, PC Thomas spoke out to highlight the risks police officers face in carrying out their day-to-day duties.

“Although I am a police officer, I do not go to work to be threatened, or to fear for my safety at the hands of someone with a weapon,” he said.

“I attended the call to try and help, and this was how he repaid me.”

Health Board appeals for public support to alleviate pressure on hospitals