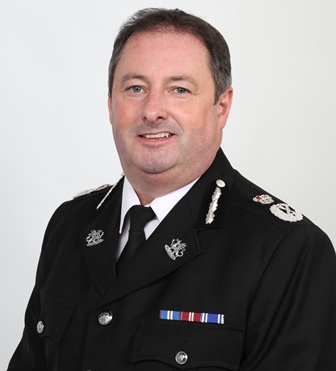 As he enters his fifth year as Chief Constable of Dyfed-Powys Police, and 35th year in policing, Mark Collins QPM today announces his intention to retire during early Spring 2021.

Having started his policing career as a Special Constable with Sussex Police in 1985, he returned to his home force in 1987 and continued to volunteer on the front line until joining the Metropolitan Police in 1991.

Thirty years later, after rising through the ranks across a number of forces and leading specialist units to combat regional organised crime and international terrorism, Chief Constable Mark Collins QPM is preparing to leave a force which has restructured over recent years to meet the demands of modern day policing and very rural communities. Two challenges to be met with innovative thinking, a real understanding of local issues and an engaged workforce.

Speaking about his time as Chief Constable, Mr Collins said,

“I couldn’t have hoped for more as a Chief than the time I have spent back in my home force, something that was unimaginable during my time as a Special Constable here more than 30 years ago.

“It hasn’t all been easy and there have been some challenges. Having gone from a force that others aspired to be, to one which appeared to have lost some direction and focus, there have been tough calls to be made on resourcing, structure and our broader model for policing the safest, yet most rural communities in England and Wales.

“Disestablishing chief officer posts at the centre in order to enable improved management structures across the four counties was a priority for me, as was a realigning our divisions to be coterminous with our local authority areas again.“

Ensuring that the UK’s geographically largest and most rural force area had a policing function which understood and was able to respond to the policing challenge unique to farming and isolated communities was also one of Mr Collins’ priorities. In 2018 he introduced the rural policing teams across the force area – a move that has been welcomed by farming unions and wider communities. These teams remain a priority and have been enhanced with further resources since their inception.

Under Mr Collins’ watch, Dyfed-Powys Police has led the way in the development of digital crime investigation and scientific support, with an investment in staff into these departments in recent years. These specialist units have both been hailed as leading in their fields, and central to the success of a number of significant investigations.

Chief Constable Collins, awarded with the Queen’s Policing Medal in the New Year’s Honours List 2020, has also held the national portfolio on policing and mental health, and in more recent years has also led UK policing in understanding and tackling group based child sexual exploitation.

In ensuring the dignity of those in mental health crisis, Mr Collins has been determined that those who are at the most vulnerable period in their lives receive the support most appropriate to their needs – acknowledging that policing isn’t and shouldn’t be that service.

Invited by Sir Simon Wesley to join the review of the Mental Health Act, which has provided some fundamental recommendations that will change the way the police service operates, he has worked tirelessly with health partners across Wales, England and service users, to ensure those changes are made and are felt.

Chief Constable Collins also acknowledges the strength of the public, partnership and third sector relationships across the force area and in the year of a global pandemic, thanks all those who he and the force have worked with in delivering the response to Covid-19. The robust partnership that exists here has seen us through the challenges that we and the whole community have faced.

He is also clear that through his time in policing at all ranks across forces, but especially in leading Dyfed-Powys Police, it has been his colleagues and their passion to serve that have made the job easier and has enabled him to continue with his aim of putting victims and the most vulnerable first.

Chief Constable Mark Collins QPM is excited for the future of Dyfed-Powys Police and the direction the force is heading in – confident it is being left in good hands. His commitment to promoting diversity across the force and the development of staff has been key to ensuring that the force has a representative workforce moving forward.

He said: “Having recently been awarded the Investors in People Gold Award, given to only a fraction of UK organisations, and our most recent staff survey results highlight our workforce’s commitment to their role, our communities and our force, I’m very proud to look back and know that because of what we’ve delivered together, Dyfed-Powys Police is in a strong position for the challenges ahead.”

Recognising Chief Constable Collins’ contribution to policing and the leadership he has provided Dyfed-Powys Police, Police and Crime Commissioner Dafydd Llywelyn said, “I would like to take this opportunity to congratulate Mark on his successful career in policing and wish him well for the future.

“Mark’s leadership has been instrumental to the improvements made within Dyfed Powys Police over recent years. He has worked assiduously to improve performance and his commitment has been of tremendous benefit to the workforce and the community we serve. Mark has been a successful appointment as Chief Constable and he has been a pleasure to work with. Mark leaves a legacy which I am confident will see the organisation go from strength to strength.”

The Police & Crime Commissioner, Dafydd Llywelyn will now consider the process to recruit Chief Constable Mark Collins’ successor, following his departure from the force in early 2021.