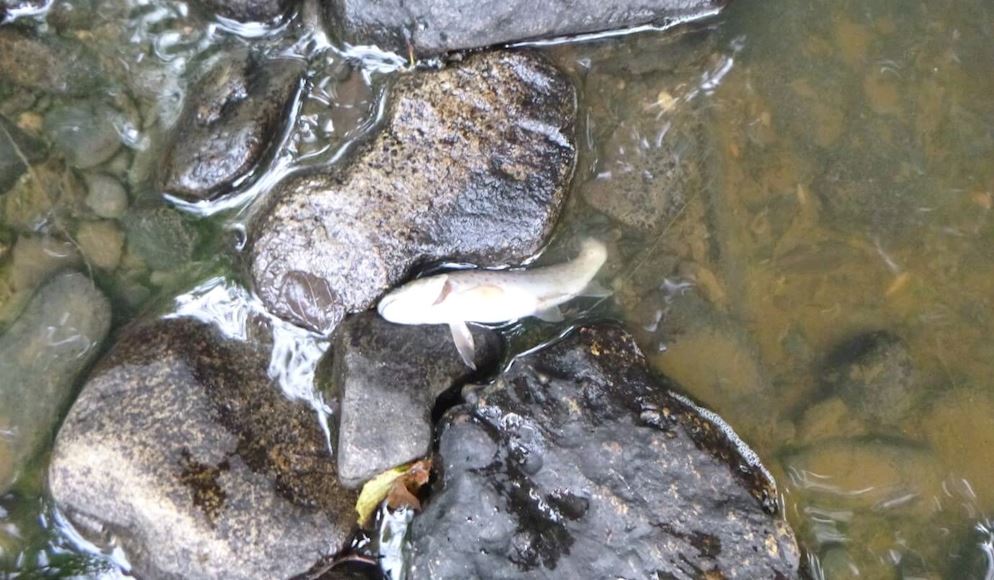 A Carmarthenshire farmer, whose negligent management of slurry killed thousands of fish in the Afon Dulas, has been fined by Swansea Magistrates’ Courts.

On 8 July 2019 he caused a discharge of slurry in the Afon Dulas that severely affected almost five kilometres of the river, causing the worst level of harm classed as category 1 by the District Judge.

Ioan Williams, Environment Team Leader for Natural Resources Wales (NRW) said: “This act of negligence had a devastating impact on the Afon Dulas. It will take a significant amount of time for the river to recover.

“This was a serious incident that could have been prevented had the farmer made adequate checks. We were left with no other option but to take enforcement action.”

NRW investigation officers were quickly on site on 8 July 2019, and over several days found evidence that the source of the discharge was from Crachdy Uchaf Farm.

They fully investigated the impacts on the river. NRW environment officers and specialists carried out a coordinated investigation to establish the extent and seriousness of the pollution incident. This included taking water samples, gathering evidence, carrying out carcass counts and capturing photographic evidence.

They counted at least 2,478 dead fish, including 746 brown trout. They also found much of the macroinvertebrate population essential to the river’s ecosystem had been lost.

Ioan Williams added: “I urge farmers and contractors to be particularly vigilant during the winter months to help prevent polluting our waterways. Carry out regular checks on slurry levels and storage infrastructure. If you are close to over-topping contact NRW for advice. We can help you minimise the risk of causing pollution. Only spread slurry when conditions are right, which means don’t spread at times when rain is forecast over the next 24 hours, when the ground is saturated and when the ground is frozen hard.

“We recognise that sometimes things do go wrong, but we urge farmers that if they know they have caused pollution, to report it to us at NRW immediately by calling 0300 065 3000. The sooner we know about it, the sooner we can work with them to try and reduce the impact on the environment.”

Health Board to launch additional measures to cope with demand