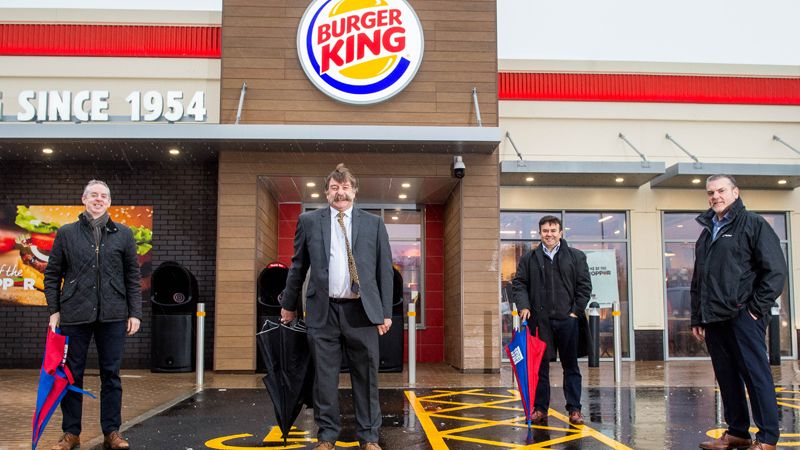 A new Burger King drive-thru has opened at Cross Hands Retail Park near Carmarthen. The purpose-built drive-thru is Swansea franchise operator Unionburger’s latest restaurant and occupies a 2,750 sq ft plot at the entrance to the Park.

Cooke & Arkwright acquired the site on behalf of Unionburger in a deal negotiated with Fletcher Morgan acting for the landlord.

Cross Hands Retail Park was newly developed by The Conygar Investment Company PLC and forms part of a 50-acre mixed-use scheme including 250 new homes by Persimmon Homes and other house builders.

Chris Baker of Unionburger said, “We’ve employed 40+ new staff to manage this site. The restaurant is in a very prominent position at the entrance to the Cross Hands Retail Park. Since its opening, the Retail Park has proved very popular in the area so we are confident that this new Burger King will also be a success. We recently opened in Barry Waterfront and that unit has exceeded expectations despite the difficulties caused by Covid.

“2020 has been a very challenging year, particularly in the high street; however, we have managed to not only survive but to expand our portfolio. With the recent announcements of vaccines becoming available, public confidence appears to be returning and we hope to see a rapid upturn in retail in 2021. We are interested in new drive-thru locations throughout South Wales and hope to open several other restaurants over the next few years.”

Huw Thomas, Director of Retail & Leisure at Cooke & Arkwright said, “This is Unionburger’s second drive-thru to open in South Wales this year, following the launch of its Barry Waterfront outlet in September.

“We identified this Cross Hands location for its proximity to the A48(T) with in excess of 36,000 vehicles passing the site daily. The wider retail location is well established due to Leekes’ historic presence at Cross Hands and several car dealerships. Cross Hands Retail Park is becoming an established retail location due to the presence of the likes of Lidl, B&M, Iceland, Pets at Home and Peacocks.

“Unionburger are planning to open several new restaurants over the next few years and we continue to actively look for new sites, in particular drive thru locations.”

Robert Ware, Chief Executive of The Conygar Investment Company PLC added, “During the year in addition to the new Burger King, we completed the 23,000 sq.ft. Lidl foodstore which opened in January 2020, let 1,300 sq ft to Card Factory and exchanged agreements with gym operator, Snap Fitness.  On completion of these lettings the Park will be 95% let.  This is very pleasing given the volatility in the retail sector and reflects the quality and robustness of the Park predominantly occupied by essential retailers who have continued to trade through the pandemic.”

Unionburger currently employs around 330 people across South Wales and at its drive-thru in Gloucester.