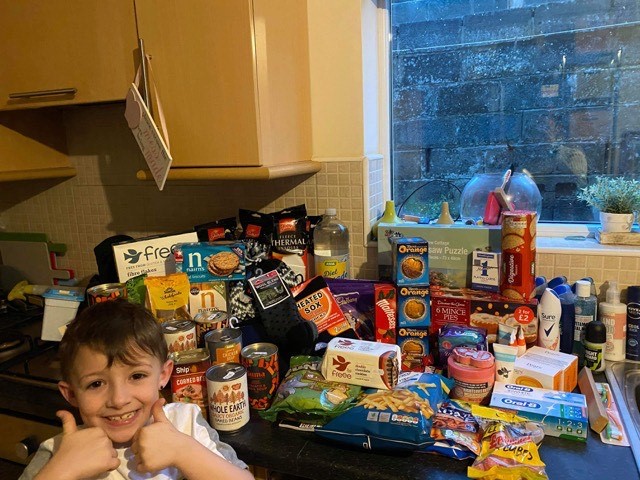 Kind-hearted Jenson Richards sent a letter with a difference to Santa this year. Instead of asking for presents for himself, the seven-year-old from St Clears said he would like to help homeless people this Christmas.

Since then, Jenson has been collecting food, toiletries and other handy bits and bobs for residents living in Silverdale, Johnston, where his aunt is a member of the support staff.

His collection has been boosted by more donations from Tavernspite Primary School, where Jenson is a pupil, and donations from Plum Vanilla café in Narberth and Whitland food bank.

His mum Charlotte King said Jenson was so excited about delivering the items he had collected. “We had no idea how much support Jenson’s wish of taking the things to the homeless for Christmas would get,” she said. “It’s so lovely to see.”

Cllr Michelle Bateman, Cabinet Member for Housing, said: “This is a such an incredible act of kindness from Jenson, and so generous of him to not only think of other people this Christmas time but to get cracking on a great plan to try and help them have a happy time. His family must be very proud of him.

“On behalf of Silverdale, I would like to express my sincere and grateful thanks and wish Jenson and his family a very happy Christmas.”

Swansea charity ‘Faith in Families’ gives thanks for over £10,000 in Christmas donations

How to create a wildlife haven with your real Christmas tree

More COVID-19 vaccinations on their way to Hywel Dda areas