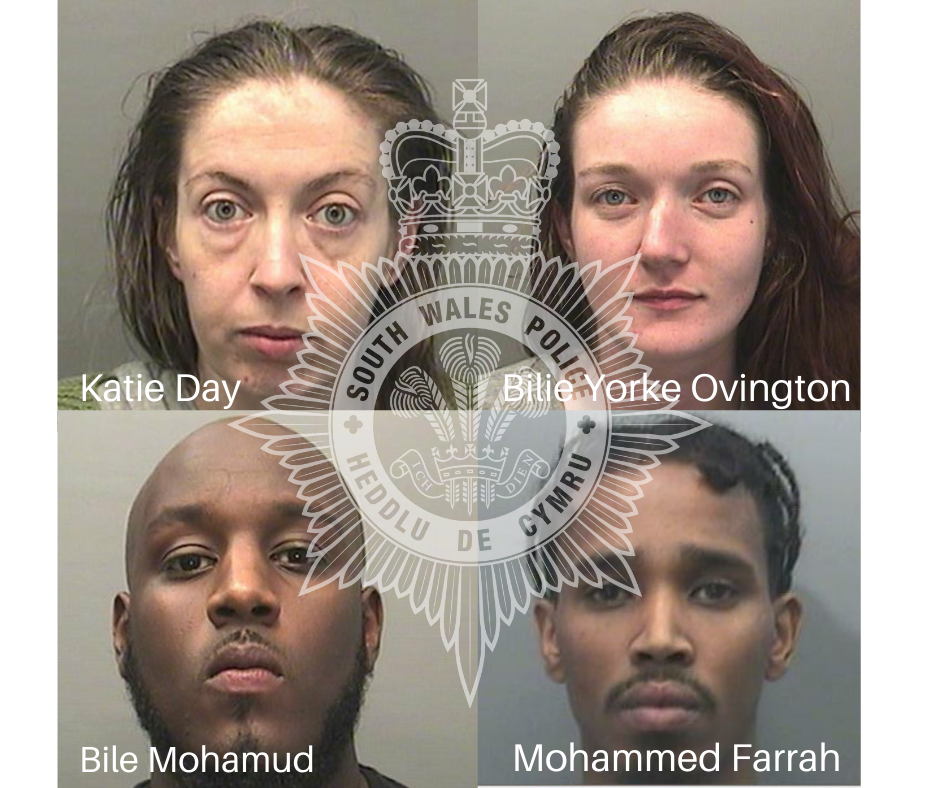 In October 2019 South Wales Police’s Op Sceptre team witnessed a drug deal in a car the Uplands area of Swansea and intervened. The driver, Katie Day was found to have 19 wraps of class A drugs in her hand. The vehicle was searched and further drugs were recovered and all four occupants arrested.

About a week later another vehicle was recovered after being spotted by the local neighbourhood policing team and this was linked to the gang and a significant amount of heroin and crack cocaine were recovered.

Following an in-depth investigation by the Priority Policing Team the below were sentenced at Swansea Crown Court yesterday:

Sergeant Richard George, of the Priority Policing Team, said: “Disruption of the drug dealing and enforcement remains central to tackling county lines criminality with the ultimate aim to make South Wales a hostile environment for organised crime groups, preventing all forms of harm associated with these gangs.

“We are also working together with partner agencies to identify and protect the vulnerable people that urban gangs are exploiting to extend their drug dealing enterprise.

“We all have a role to play in keeping our local areas safe from drug dealing, and associated gang exploitation and violence and I urge the community to support us in eradicating this problem.

“If you suspect drug dealing is taking place or you are concerned that a young person or vulnerable adult may have been targeted by an organised crime group, please tell us. You don’t have to be certain, just concerned.

“Call us on 101 or if you prefer you can contact Crimestoppers to report anonymously – online or by calling 0800 555 111. If someone is in immediate danger or a crime is taking place you should always dial 999.”

Don’t be taken in by COVID vaccine scam warns council