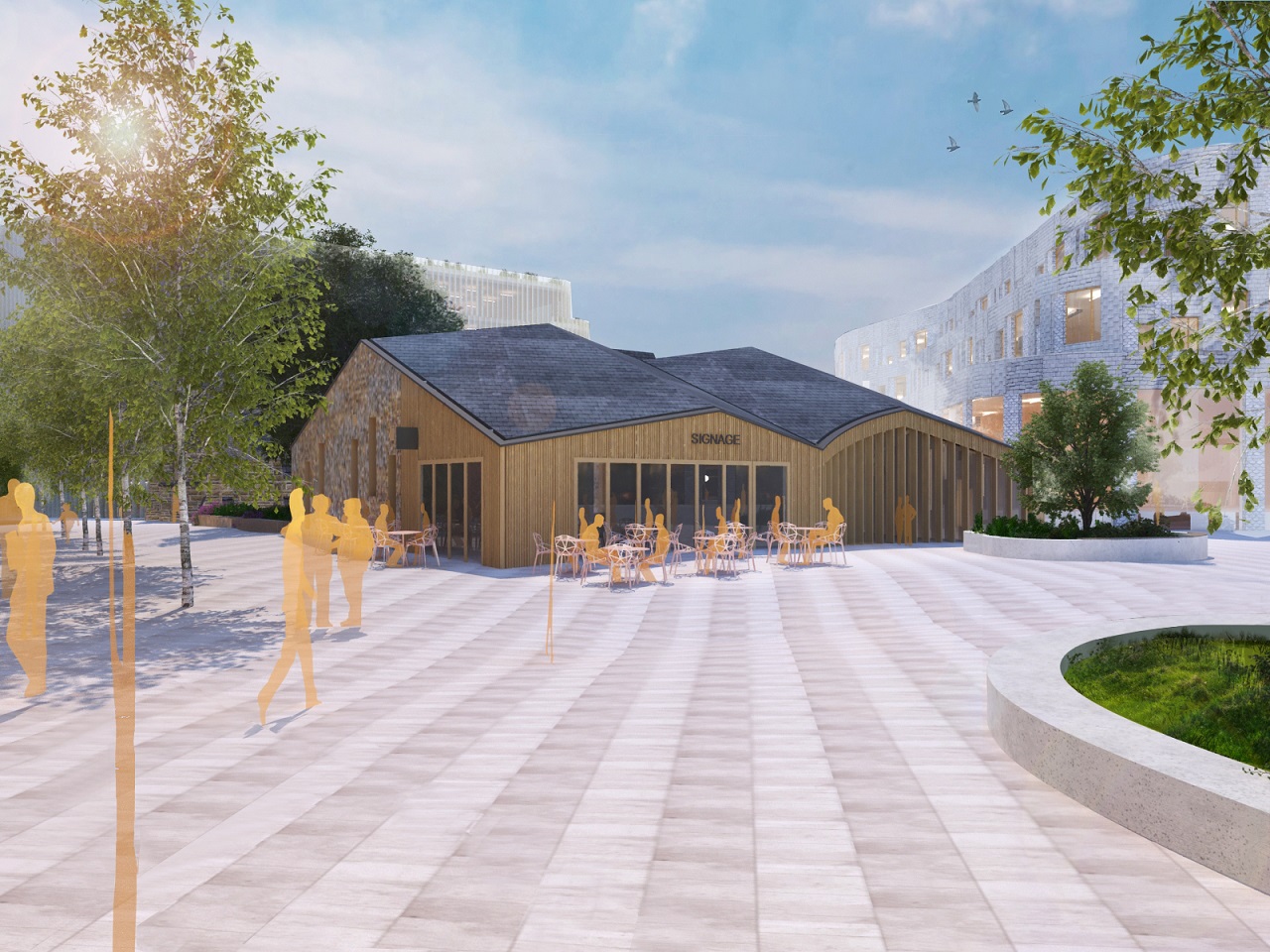 Building work has started on a new community facility at the heart of a major Swansea regeneration site.

The building next to St David’s Church – one of the city centre’s key historic landmarks – will provide replacement church hall facilities as well as a separate commercial unit, the uses of which could include a café.

Construction is taking place close to Llys Dewi Sant, the church’s existing hall that is being removed as part of the Copr Bay transformation plans.

The new St David’s Church Hall – with a public square, landscaping and cycle parking – will be around two minutes walk from the 3,500-capacity indoor arena being built as part of the £135m Copr Bay Phase One project.

Other development nearby will include retail, commercial and office space, homes, car parking, a hotel and a broad new pedestrian bridge across Oystermouth Road.

Planning permission was granted for the church hall last year. It is being built by Buckingham Group Contracting Ltd.

“This high-quality building will occupy a key location within Copr Bay. It’ll be good for the church and for the whole city as I’m confident we’ll attract an exciting partner for its commercial area. Discussions with a high-profile potential tenant continue.”

Other expressions of interest are still invited through the Copr Bay website – http://www.bit.ly/CBStDcommercial.

The church hall building will have a highly visible presence on the key pedestrian route linking the marina, arena and city centre.

It will provide a modern, flexible, functional community facility, will add more multi-purpose open space to the city centre and will front actively onto the square.

The building will be accessible to all and will have parking for disabled users.

The scheme has been designed by architects ACME. The church has been engaged in the process.

It is intended that it will continue the work of the existing church hall as a venue for Sunday school, church services, exercise classes, parish meetings and other social gatherings.

The standalone new building is being developed with careful consideration given to its relationship with the 1847-built Grade II listed St David’s Church.

St David’s Priory is the oldest Roman Catholic Church in Swansea. It replaced an earlier church building that had been established circa 1808. The new church of St David’s was built in 1847 to design by Charles Hansom, as well as the Catholic school adjoining the church. In 1864 St David’s was enlarged to the plans of architect Benjamin Bucknall and a new presbytery was built. In 1873 the parish was taken over by the monastic Order of Saint Benedict, and St David’s church was elevated to the status of a Missionary Priory. It was renovated in 1894 and 1907. It is Grade II listed.

The plans of 1897 show the dense fabric surrounding St David’s and the school building that had been constructed west of the church. This arrangement remained in place until the late 20th century.

The building was closely surrounded by urban fabric to the west, north and south. There were no major streets leading to the church, and its elevations reflect the more intimate scale of the church and its site-street position.

The school building and the other buildings surrounding St David’s were demolished in the 1980s.