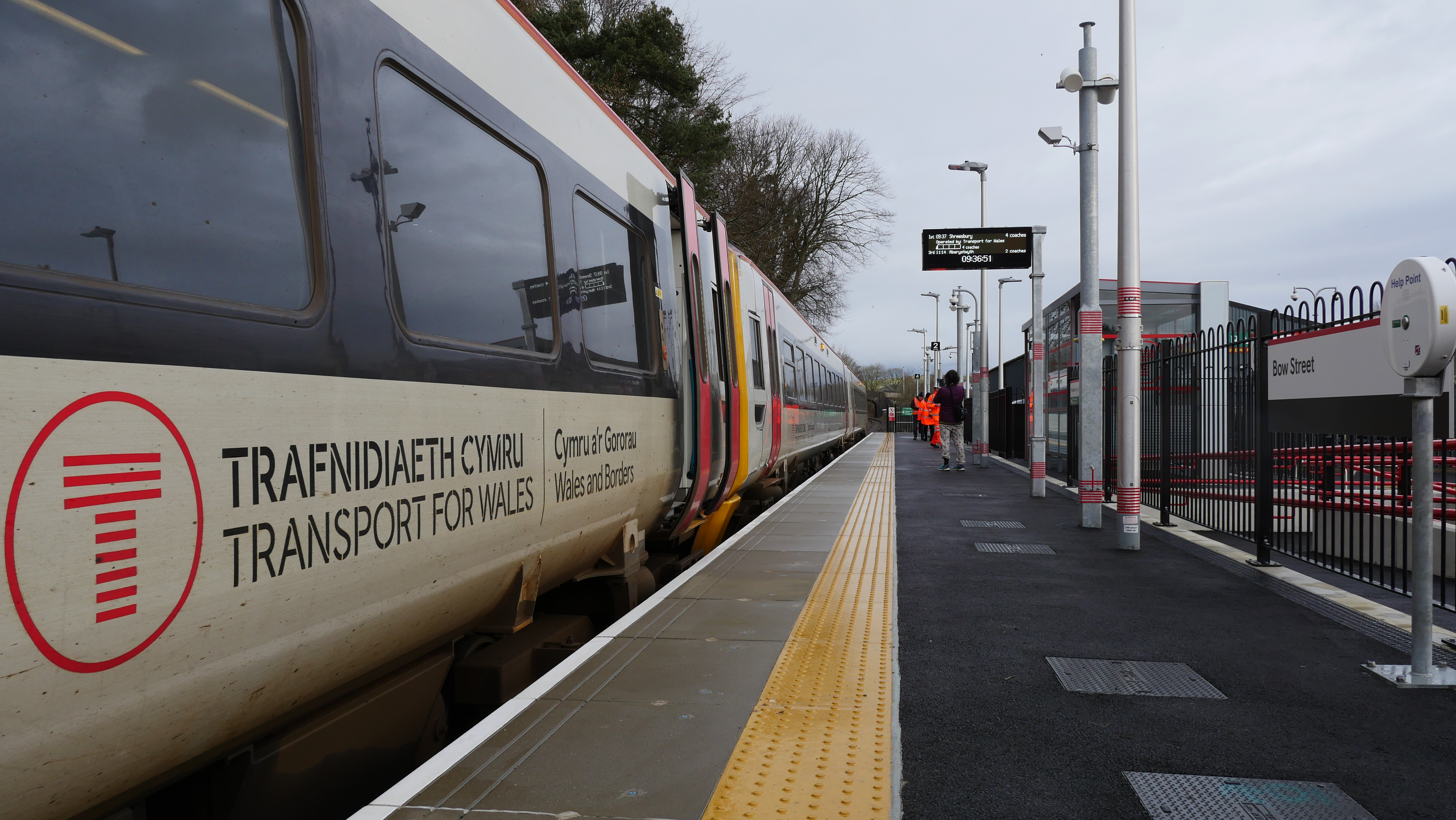 Transport for Wales has announced the opening of the new Bow Street station.

The first train stopped at the station in Ceredigion, mid Wales, at 9.12am on Sunday 14 February, providing a link to the national rail network for the community of Bow Street for the first time since the former station was closed in 1965.

It is the first station to open in Wales since Pye Corner in December 2014 and Transport for Wales’ first since taking over the Wales and Borders network franchise in 2018.

In November 2020, the UK Government announced a further £32 million of funding to deliver three new stations in England and Wales, including St Clears in Carmarthenshire.

The Bow Street development has been funded by the Welsh Government and the Department for Transport, having first been identified in 2010 as an opportunity offering value for money and with strong local support.

It is anticipated the new station will generate more than 30,000 new trips per year (based on pre-COVID levels), reduce congestion and parking issues in Aberystwyth, while also opening-up new employment and education opportunities for local residents.

Ken Skates, Minister for Economy, Transport and North Wales, commented: “This is great news for passengers and the local area. The station will bring social and economic benefits to the area, which alongside the nearby active travel routes will make it easier for people to travel in a sustainable way.

“The funding we have provided is a sign of our ongoing commitment to improving the railway in Wales and giving more choice to passengers.”

UK Government Rail Minister Chris Heaton-Harris said: “It is fantastic that vital rail links have been restored for the Bow Street community for the first time in more than 50 years.

“Our investment in new stations is focused on improving journeys, boosting access to jobs and education and kickstarting economic growth as we build back better from Covid-19.”

The station will be served by trains on the Cambrian Line between Aberystwyth and Shrewsbury and from 2022 will benefit from the introduction of brand-new trains and an hourly weekday service.

James Price, Transport for Wales CEO, said: “It’s an exciting and important milestone for us to complete the first new station since taking over the Wales and Borders rail service.

“It is testament to the skill and hard work of our teams that they have been able to deliver this new station despite the many challenges caused by the COVID-19 pandemic over the last year.

“Public transport is currently open to those making essential journeys only, but we look forward to welcoming residents and visitors to Bow Street when lockdown restrictions have changed and it is safe to do.”

It also features a 70-space park and ride car park, bus drop-off and pick-up point, access to local cycle routes and a covered cycle shelter. It also benefits from easy access thanks to improvements to the existing A415 junction with the A487(T).

Bill Kelly, Network Rail Wales route director, said: “We are delighted to have been able to support TfW in the development and delivery of the new Bow Street station.

“It will have a hugely positive impact on the local community and the wider region as it will be easier than ever for people to connect with employment, education, health and other vital services.”

“None of this would have happened without the vision, hard work and dedication of many individuals and organisations working together over the last 10 years on this project. Make no mistake this is a big step forward for Ceredigion and Mid Wales – the Interchange will provide a much-needed boost for the local economy and help to improve the availability of sustainable travel opportunities as part of our efforts to de-carbonise the transport sector.”