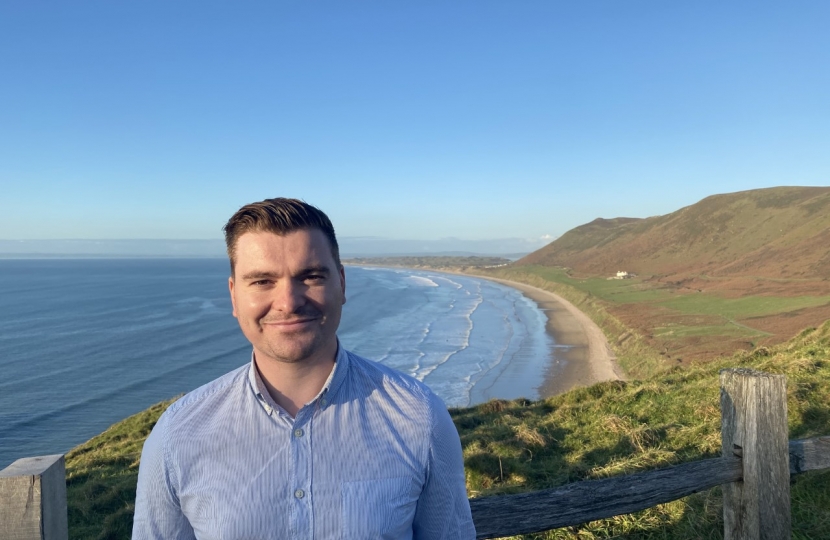 Cllr Myles Langstone, Conservative Senedd Candidate for Gower, has called on the Welsh Government to take plans for a tourism tax off the table immediately to help protect hospitality businesses and jobs which make up a large part of Gower’s local economy.

First Minister, Mark Drakeford, said recently he hadn’t ruled out imposing a levy on holiday accommodation – despite the sector being hammered by the effects of the pandemic.

Myles said: “Hospitality businesses in Gower have been through an incredibly tough year and as we near the end of the pandemic we need the Welsh Government to provide a positive plan for recovery and rebuilding our economy. Clearly, the years ahead will be vital in helping our tourism sector bounce back.”

He added: “However, the Welsh Labour Government are proposing this new tax which will deter visitors from coming to Wales and hit much needed visitor spend in our local shops, cafes, pubs and tourist attractions. Not only that – but it would also put thousands of jobs at risk which would be devastating.”

Tourism is more important to the Welsh economy than in any other part of the UK, generating billions of pounds and supporting many thousands of jobs – and Gower is naturally recognised as one of Wales’ top tourist destinations.

Myles said: “I am incredibly proud that we live in such a beautiful part of the world, where people come from all over to visit. Gower, as the first designated Area of Outstanding Natural Beauty, attracts large numbers of people who all contribute to our local economy and support local jobs. While we have our iconic coastline on Gower peninsula, great spots for surfers, fantastic coastal walking routes and excellent pubs and restaurants, we must not allow Drakeford’s Welsh Labour Government to destroy the industry by ramping up taxes. Instead, let’s find positive ways to help our economy recover and grow.”