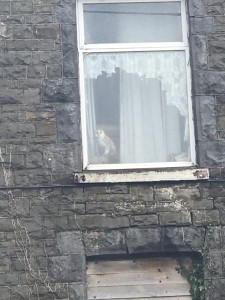 A barn owl has been rescued from a disused building in Pontyates by RSPCA Cymru.

Officers from the animal welfare charity were alerted after members of the public spotted the owl in the front window of the property in the Gwendraeth Valley village.

RSPCA Cymru attended the scene – and made local enquiries to track down the owner of the building, and gain access to the trapped owl.

Amazing photographs show what animal rescuer Paula Milton saw at the property on 20 February – with the owl peeking out of a top floor widow.

The bird, once rescued, appeared a little skinny – so came into the RSPCA’s care for a short spell of rehabilitation, before being returned safely to the wild by RSPCA officer Ellie West on 22 February.

It was thought the owl had accessed the property through holes in the roof, which has been empty for a number of years.

Animal rescue officer Milton said: “You don’t expect to see an owl looking out of a top floor window – but that’s what happened at this disused property in Pontyates.

“Fortunately, through our enquiries, we were able to track down the owner of the building and luckily a local resident knew who they were and was able to get in touch.

“It seems likely the owl had entered the property through holes in the roof.

“The owl looked a little skinny – and potentially hadn’t had access to food for a short time; so we took the bird in for a short spell of rehabilitation.

“He was given tubed fluids, fed and checked over – and thankfully everything was fine; so we were able to return this lucky owl to the wild two days later.”