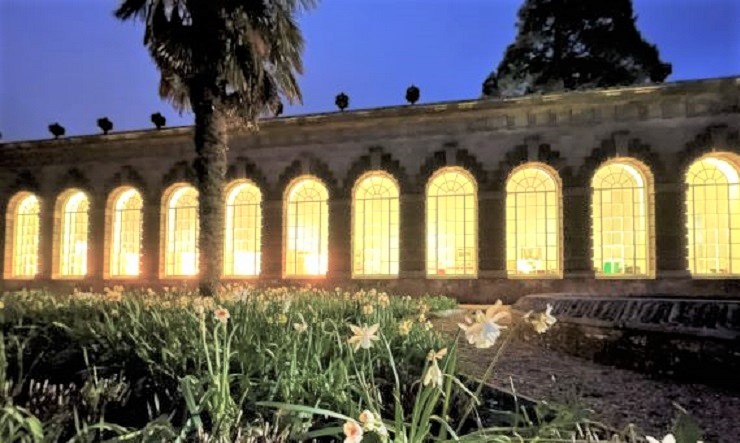 Margam Country Park’s iconic Orangery was lit up as was the Impressive Pontardawe Arts Centre building and from many Neath Port Talbot doorsteps, the lights of torches, candles and phones beamed out forming “a beacon of remembrance”.

It was all part of Tuesday’s National Day of Reflection in Neath Port Talbot which joined the nationwide commemoration of 12 months since the first national lockdown in response to the Covid-19 pandemic.

Organised by the end-of-life charity Marie Curie, the National Day of Reflection is a tribute to the more than 125,000 people in the UK who have died with Covid, with 7,731 of those deaths in Wales. Across the world it is estimated around six million people have been bereaved since the pandemic began.

Many young schoolchildren from Neath Port Talbot, some dressed in rainbow colours, observed yesterday’s minute’s silence in memory of those who lost their lives at midday while people shone lights from their doorsteps at 8pm.

The Pontardawe Arts Centre in the middle of the Swansea Valley town was also lit up where Box Office Manager Elizabeth Felton said: “Pontardawe Arts Centre usually has around 64,000 visitors through the venue doors annually to enjoy a host of creative, educational, entertaining and artistic events together.

“But we have been closed to the public now for a whole year. In that time we have lost audience members, people who used to come to our venue regularly and people in our communities who we won’t see again.

“Some of these faces were people we saw regularly on a weekly basis with their friends and families before Covid forced us to shut the venue doors so we joined the Day of Reflection and sent love to the lost – thinking of those Arts Centre regulars, audience members and people in our communities we have lost.”

Neath Port Talbot Council Chief Executive Karen Jones said:  “March 23 has become a National Day of Reflection – an opportunity to pay respects to all those we’ve lost to Covid-19 and to pay tribute to all those that have worked on the frontline and supported our communities in so many ways these last 12 months.

“This has been an extraordinary year for all of us in Neath Port Talbot and after a remarkable community effort we are beginning our journey towards recovery.

“But there is a lot still to be done. We can get through this together by continuing to follow the rules and advice – taking care of one another.”

Buildings in Wales, including the Senedd, Britannia Bridge, Principality Stadium and castles at Caerphilly, Conwy and Caernarfon, all played a part in the National Day of Reflection yesterday and First Minister Mark Drakeford, Health Minister Vaughan Gething, Chief Executive of the Welsh NHS Dr Andrew Goodall and the head of the civil service in Wales Dame Shan Morgan observed the minute’s silence on the steps of the Welsh Government’s offices in Cathays Park, Cardiff.