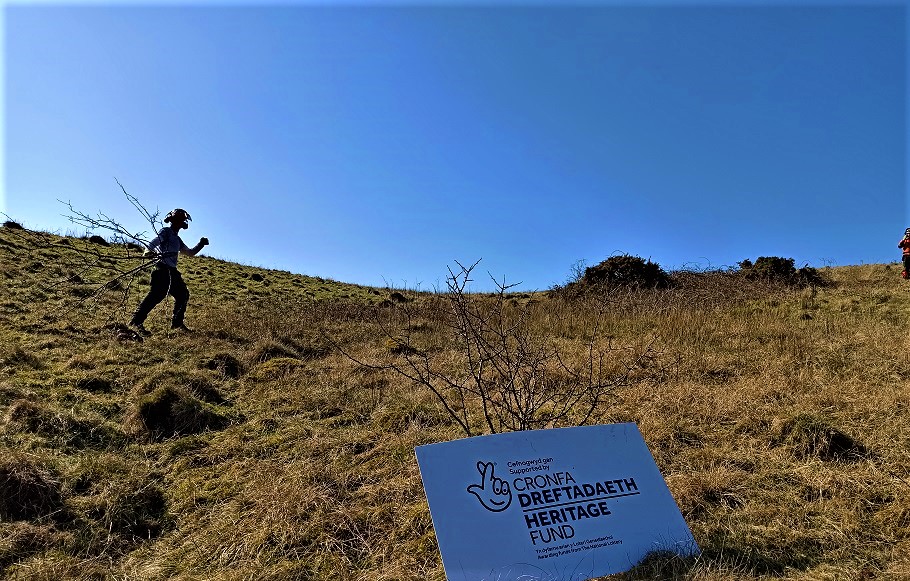 Neath Port Talbot Council’s Countryside and Wildlife Team has begun a project to re-introduce grazing animals to the Bryn Tip Local Nature Reserve in the Afan Valley to improve the condition of the reserve’s grassland.

The team has won funding for the Bryn Tip Conservation Grazing Project – which will see ponies and cows living on the nature reserve for several months of the year – from the Welsh Government’s Local Places for Nature grant and The National Lottery Heritage Fund.

Grazing animals play an important role in maintaining ecosystems by stimulating plants to grow and the project will establish conditions for the re-introduction of conservation grazing animals to the reserve to improve its grassland, which is rapidly degrading in their absence.

As well as fencing work and installing a new drinking trough for the animals, there is also funding to remove invasive species and scrub from the site and to get local people involved by training them in stock checking and species identification and by volunteering to give general help (if COVID restrictions allow).

The team will also produce a video – A Virtual Tour of Bryn Tip Local Nature Reserve – which is aimed at raising awareness of the importance of the site both in the local community and in the wider county borough.

The Bryn Tip Local Nature Reserve is a 23 hectare site in the village of Bryn which provides an interesting combination of historical features, accessible open space and natural habitats supporting a range of flora and fauna.

The land is the site of the former Bryn Navigation Colliery and it now supports species-rich grassland (calcareous and neutral), gorse scrub, wet flushes, and a large diversity of species associated with these. Two scarce/nationally threatened species can be found here, as well as three orchid species.

Neath Port Talbot Council along with the NPT Local Nature Partnership and Bryn Residents’ Action Group have funding to do the following works to enable restoration of the grassland at Bryn Tip:

•   Installing fencing to allow grazing animals to be introduced.
•   Removal of invasive species from site.
•   Scrub clearance with the community.
•   The installation and connection of a permanent water source.

As well as the benefits for the grassland, which will lead to increased wildflowers, butterflies and bees for visitors to see at Bryn Tip, there are also opportunities for local people to get involved through training courses – a LANTRA (the national training body for land based industries) accredited ‘Stock Checker’ course which will train local people to help with the care of the grazing animals and some wildlife identification courses too.

Work on the project has started and is due to go on until November. As a result of the project, the ponies and cows will be on the site for some months of each year. When these animals are on the nature reserve, dog owners and other users are asked to be aware and to keep their dogs on leads.

Andrew White, Director of The National Lottery Heritage Fund in Wales, said:  “Nature is our greatest asset, but it is under threat and this is why the Local Places for Nature grant programme is offering grants for projects such as the Bryn Tip Local Nature Reserve to restore and enhance nature.

“It’s very encouraging that this essential work of preserving the eco-system at the Bryn Tip Local Nature Reserve is taking place and it’s great to see that a lot of this is actually being done by something as simple as re-introducing ponies and cows to the site.”