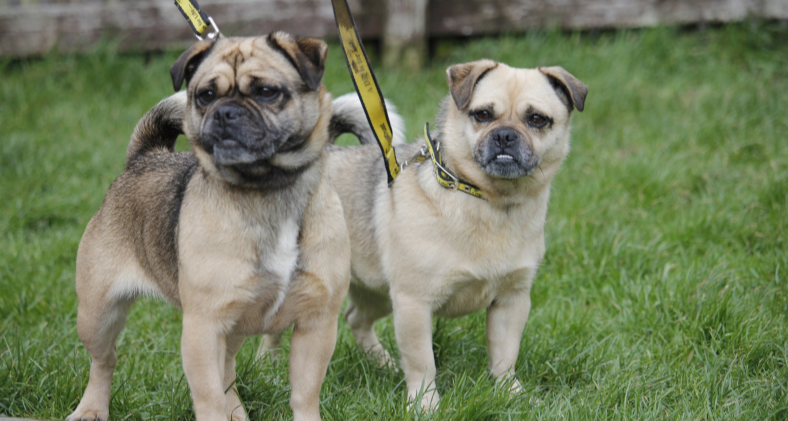 Tails are wagging at Dogs Trust Bridgend as the rehoming centre celebrates its 100th rehome this year – in the form of an adorable, devoted duo.

Taking the accolade are five-year-old Jack Russell Pug crosses, Pixie and Cleo, who have been adopted by Melanie and Graham Day, from Gloucester, after their beloved Boxer dog, Lulu, passed away just before Christmas last year. Pixie and Cleo found themselves in the care of the Pen-y-Fai rehoming centre when their previous owners could no longer care for them.

Melanie said: “Losing Lulu just before Christmas was devastating and we were very much left with a dog-shaped hole in our lives. I really believe that having a four-legged friend really makes a house a home, so we started looking to welcome another one into our lives.

“We hadn’t banked on adopting two dogs, but we certainly have double the love to give and they have settled in so well – it’s just what our house needed.”

Dogs Trust Bridgend have continued to find dogs loving homes during the pandemic and have adapted their processes to keep staff and adopters safe.

Angela Wetherall, Manager at Dogs Trust Bridgend, says: “It has certainly been a busy start to the year but it’s fantastic that so many people, like Melanie and Graham, want to give our dogs a second chance and it’s wonderful to see Pixie and Cleo settled in their forever home.

“We have continued to take dogs into our care during the pandemic but we are preparing ourselves for the months ahead as we believe the worst is yet to come. We expect many more dogs could need our support as the pandemic fallout continues – and we will do all we can to help those in need of our help.”