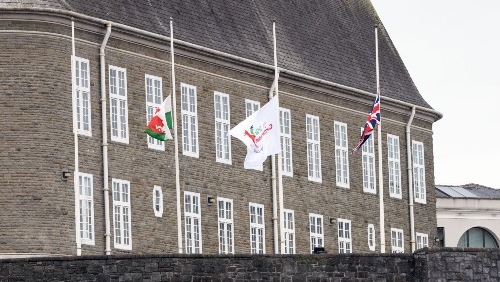 Flags are flying at half-mast at Carmarthen’s County Hall, Llanelli Town Hall and Ammanford Town Hall following the death of HRH The Duke of Edinburgh.

The Chair of Carmarthenshire County Council is writing to Her Majesty The Queen and The Royal Family expressing the county’s great sadness following the death of HRH The Duke of Edinburgh.

Flags have been lowered to half-mast at Carmarthen’s County Hall, Llanelli Town Hall and Ammanford Town Hall as a mark of respect.

The Duke of Edinburgh last visited Carmarthenshire in April 2010, to officially open an all-weather Village Games Court in Bancyfelin, in his official capacity as President of Fields In Trust.

He had arrived aboard the Royal Sovereign and was greeted by children of Llangunnor School at Carmarthen Railway Station before travelling to Bancyfelin.

In June 2002, The Duke accompanied HM The Queen on a visit to Llanelli and Burry Port as part of her Diamond Jubilee tour of the UK.

Chair’s letter to HM The Queen

It is with great sadness that I learnt of the death of the Duke of Edinburgh.

On behalf of Carmarthenshire County Council, I would ask you to convey to Her Majesty and her family our deepest sympathy at this very sad time.

Carmarthenshire has fond memories of Her Majesty’s Golden Jubilee Tour of Wales in 2002 accompanied by the Duke of Edinburgh when thousands of school children from across the County lined the route from Burry Port Harbour to North Dock in Llanelli, together with the Duke’s visit to Bancyfelin in 2010.

The Duke of Edinburgh has died aged 99 Buckingham Palace has confirmed in a statement this morning (Friday 9 April) The official statement from the Royal household said: “It is with deep sorrow that Her Majesty The Queen announces the death of her beloved husband, His Royal Highness The Prince Philip, Duke of Edinburgh.…