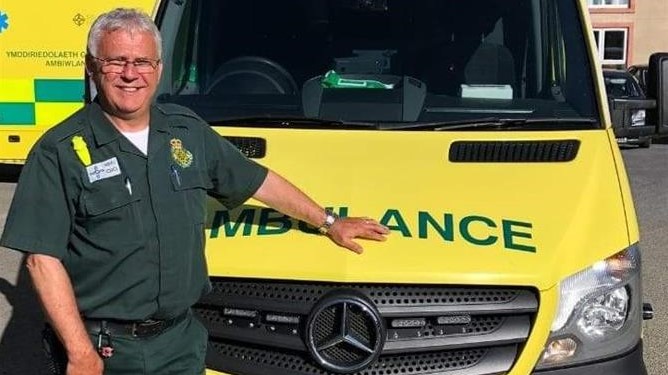 A Paramedic who was inspired to join the ambulance service by his father is retiring today after a 40-year career.

As a boy, Gary Davies, of Cardigan, spent many an hour at Carmarthen station helping out and hearing stories from the crews and his father Elwyn, who served 24 years there.

Gary, a father and grandfather, who is based at Cardigan station, said: “Healthcare ran in my family with both my mum and sisters being nurses and my father in the ambulance.

“I started out at Glangwili Hospital as a porter and nurse auxiliary to gain some medical experience.

“Then, as soon as I could I attended the South and Central Ambulance Training School in Bridgend where I qualified as what was then known as an ‘ambulance man.’

“I spent my first year at Llandovery station and then moved on to Cardigan where I have been ever since.”

Gary holds the record for the longest serving ambulance person on that station.

He went on to qualify as a paramedic in 1993 at Cefn Coed Hospital, Swansea, and along the way also qualified as a Paramedic Placement Educator and helped to train the next generation of Welsh paramedics for a couple of years.

Having seen many changes across the years, Gary will take with him not only his mental memories, but physical ones too.

He explained: “I’ve got quite an extensive collection of ambulance memorabilia which my wife Maisie says is now taking over the house.

“I started collecting bits after about 10 years and never really stopped.

“I’ve got old medical equipment, uniforms, photos and even a stretcher.”

But pride of place in Gary’s collection is his very own ambulance.

“I’ve got Morris LD ambulance which I keep in a lock-up and still take for a spin every now and again.

“I also look after a Bedford 71 for the service.”

Reflecting on his career, Gary said: “I’ve always been very proud of my job.

“I love being out on the road and meeting all the patients and have worked with some colleagues for a very long time.”

In October 2017, Gary stepped back from being a paramedic to become an emergency medical technician and will work his final shift on Thursday 08 April.

“I will miss all my colleagues and friends dearly and I will be sad to leave,” he said.

Catrin Convery, Locality Manager in Ceredigion at the Welsh Ambulance Service, said: “He’s been an exceptional member of staff who has worked and dedicated his life to the service for 40 years.

“He has always been so kind and caring, but likes to share a joke or two.

“He promotes excellence and made the workplace a fun place to be.

“We will definitely miss him, and we hope he will keep in touch with us “

Gary has no immediate plans upon retirement but will take a well-earned rest first.

Injured pigeon, insomnia and onion juice in eyes – just some of calls to Welsh Ambulance Service they say are better directed elsewhere