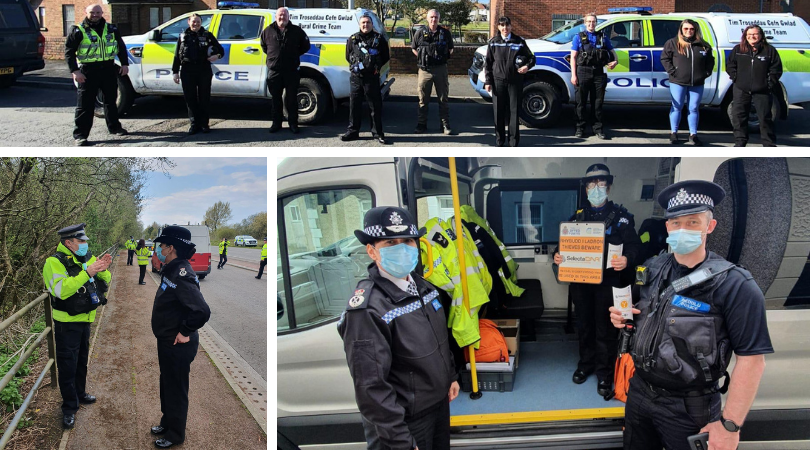 Five drugs warrants, more than 160 cars stopped, and 140 homes visited over the course of a day in Carmarthenshire.

Supported by partner agencies, officers and staff visited shops, parks and train stations throughout the day, clamping down on illegal activity and engaging with residents.

Inspector Mike Ross said: “With towns starting to open as lockdown restrictions ease, it is important that our communities see a visible policing presence.

“This day of action aimed to show people the work we are carrying out through face-to-face engagement, while also acting on intelligence to disrupt criminal behaviour.”

Five drugs warrants were executed across the county, with four proving positive for illegal substances. The occupants were dealt with by out of court disposals.

On the A484 at Loughor, officers and staff from Natural Resources Wales stopped more than 160 cars, checking for traffic and waste carrying offences. A number of vehicles were searched, and warnings handed out.

Joint operations were carried out with colleagues from South Wales Police in Hendy and Pontarddulais, where targeted patrols were conducted at areas known to suffer from antisocial behaviour and drugs use.

Antisocial behaviour was also a focus in Ammanford, where high visibility patrols took place in the town centre, as well as Betws and Ammanford parks.

Insp Ross said: “We have acted on the concerns of residents in these areas, purposefully tackling areas we are aware of issues having been reported.

“Antisocial behaviour and drugs use can blight communities, and we are doing all we can to crack down on these problems.”

A shoplifting operation was run in Carmarthen, while targeted antisocial behaviour patrols were also carried out in the Brewery Road and Park Hall areas.

Neighbourhood Policing Teams in Llanelli joined forces with British Transport Police in Llanelli, looking for evidence of drugs supply to the town through the rail network and promoting safe train travel. A number of stop searches were carried out, with some substances found. These were dealt with through out of court disposals.

Insp Ross said: “We would like to thank all our partners for their help during the day, as well as all the teams involved across Carmarthenshire.

“We hope our high visibility has assured residents that we continue to be out and about tackling issues, providing positive engagement and working to keep our communities safe.”

Jonathan Jones, NRW environment team leader, said: “Joining forces with Dyfed-Powys Police for another day of action allowed us to investigate and clampdown on illegal waste carriers and iegal waste sites in Carmarthenshire.

“This issue is not going away and neither are we. I hope that our continued partnership enforcement action sends a clear message to anyone involved in illegal waste trade that we will catch them, and we will take the necessary action to put a stop to their crime.

“Information on who needs to register and how is available on the waste permitting section of our website, or by calling 03000 653000.”