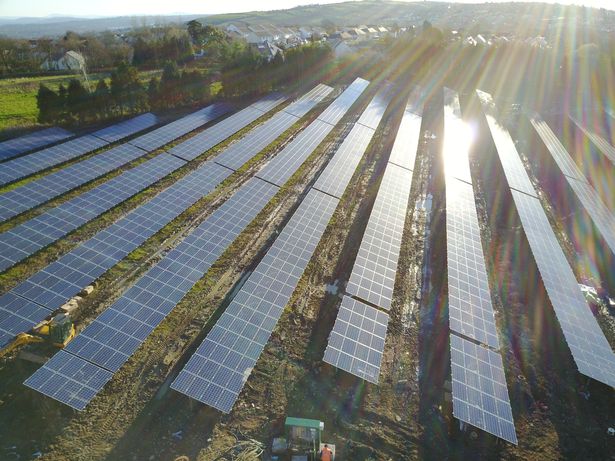 The first community-owned solar farm in Wales has launched an offer to supply Swansea homes and businesses with clean, green energy produced on the Gower peninsula – an Area of Outstanding Natural Beauty – with all profits being ploughed back into local grassroots community projects.

Gower Power Solar Storage, a project made possible with support from Welsh Government with European Regional Development Funds, will enable up to 300 local homes and businesses to be supplied with green energy from the solar farm owned 100 percent by community benefit society, Gower Regeneration Ltd.  All profits from the project will go back into local grassroots community projects.

The 1MW solar farm at Killan Fach Farm, Dunvant, began generating power on March 31st 2017 and became the first community owned solar farm in Wales after a successful share offer raised around £900,000 from ethical investors, largely in the Swansea area.

Gower Power Solar Storage has teamed up with leading green fuel provider, Ecotricity as part of the project, and they will provide the necessary customer services and billing. Ecotricity will be able to top up any electricity that isn’t generated onsite site with 100 percent renewable sources, and also offer Gower Power Solar Storage customers carbon neutralised gas.

It is expected that the solar farm will generate clean, renewable electricity for 30 years, and over time will produce a surplus of around half a million pounds.

Ant Flanagan, Director of Gower Power Solar Storage CIC, said: “We are delighted to launch this offer for Swansea which will, we hope, light the way for other clean, green energy opportunities for local businesses and consumers. We know from our research that more and more people want to buy clean energy for their homes and know how that energy is generated. In addition, businesses in Wales are prioritising green practices and are keen to continue to embed them in their operations. This is an important part of their CSR practices, it is a real selling point to younger recruits into their firms and increasingly, it makes sound business sense. We hope firms in the Swansea area will look at the offer we are making and consider making this ethical switch.”

Dr Dale Vince OBE, founder of Ecotricity, added: “One of the things modern life has taken from us is the connection to where things come from – energy is a good example of that, it just arrives at the flick of a switch. Creating a connection between local people and local energy is really important, both economically and emotionally. It’s also a part of the transition we need to make to being 100% powered by green energy as a country. Wales has ambitious energy targets and we’re keen to play a part in that through this project.”

In time, members of the community benefit society will decide which local projects and enterprises will benefit from any surplus income generated by the farm. Gower Power Co-op CIC is already supporting numerous local projects with funding raised similarly, from sales of green electricity from solar assets elsewhere in Swansea.

Dare you enter the Midnight Library? Swansea libraries are giving away 1000 copies of the best selling Matt Haig book