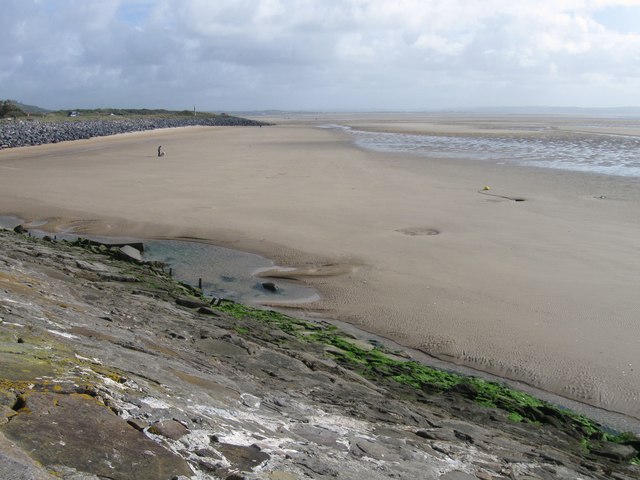 Carmarthenshire County Council has asked specialists to assess an amount of material that they say could potentially contain asbestos, which has been spotted amongst rocks and shingle on a short stretch of beach near Burry Port on the site of a former Power Station.

The material, that looks like rubble and small sections of corrugated sheet, has been seen in a small area some way east of the harbour where coastal erosion is uncovering some remains of previous industrial use in the area.

The council is reassuring members of the public that the wet conditions of the beach means the material poses very little risk – asbestos fibres only become a risk if they are disturbed and become airborne.

However members of the public are being asked not to touch or move the material so that it can be properly assessed and dealt with.

It comes after Pembrey and Burry Port Mayor, Cllr Mike Theodoulou expressed frustration that neither the council or Natural Resources Wales would initially investigate the matter.

In a facebook post, Cllr Theodoulou said: “The County Council say it is not their problem and referred them to Natural Resources Wales who logged the report but said it is the County Council who are responsible for the Millennium Country Park.”

Cllr Theodoulou added that two local residents, Jonathan Thomas and Tristram Evans had sent samples from the beach to a laboratory in Bristol, at their own expense. The results he said proved that it was asbestos.

He added: “Although the authorities were informed months ago there has been no investigation to establish how dangerous this may or may not be and no attempt to put up signs and notices to warn people using the beach.

“Information from some who worked and witnessed the demolition said that hundreds and hundreds of bags full of the most dangerous asbestos were buried in excavated holes right where the newly exposed pipes lead to.

“What most concerns me is that Jonathan told me that he has seen (and thankfully intervened) young children building sandcastles on the beach and decorating them with flaking, dusty pieces of asbestos.

“I and Karen Morris, as your newly elected Mayor and Deputy Mayor are determined to get some action on this as a matter of urgency and thank God for people like Jonathan and Tristram who are putting our community first.”

Cllr Philip Hughes, the Carmarthenshire Council’s Executive Board Member for Public Protection, said: “We have acted on reports of sightings of material that could potentially contain asbestos on a small stretch of the beach between Burry Port and Pwll. This is in an area where some remains of the power station that was demolished in the 1990s is being uncovered by coastal erosion.

“Whilst we can be reassured that the material – even if it is found to contain asbestos – poses very little risk due to the wet conditions of the area, we advise people to leave the material alone.”

Cllr Peter Hughes Griffiths, Executive Board Member for Culture, Sport and Tourism, added: “Whilst we await the imminent advice of the specialists we will continue to monitor the beach as part of our routine inspections and will take any necessary action as and when we are advised, including localised notices.”

Asbestos is a fibre-like material that was once commonly used in buildings for insulation, flooring and roofing. It is not harmful if left alone.

Some people who have been exposed long-term to airborne asbestos fibres could develop a condition called asbestosis.

Anyone concerned about exposure to asbestos should seek advice from their GP.

Sealife to be boosted by scientific Swansea tile team