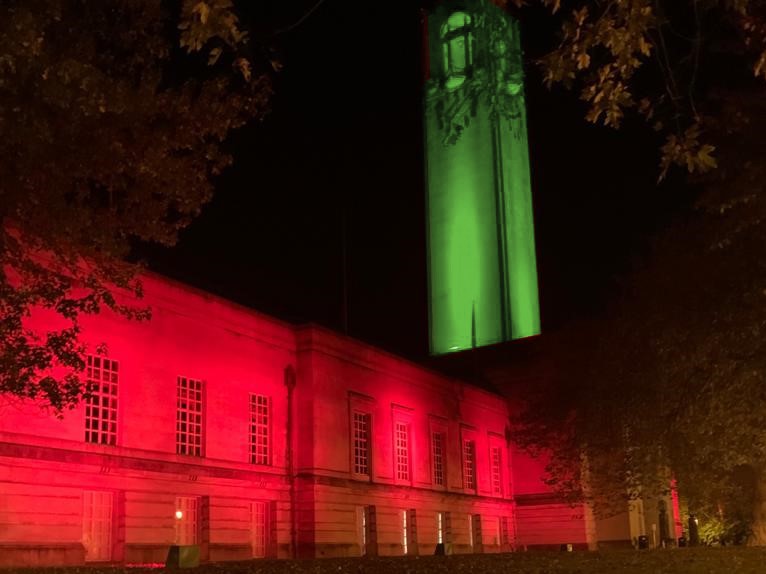 Swansea’s Guildhall is being lit-up to celebrate the 11th anniversary of Swansea becoming a City of Sanctuary.

In 2010 Swansea became the UK’s second official City of Sanctuary – and Wales’ first – highlighting the area as having a culture of hospitality and welcome, especially for refugees seeking sanctuary from war and persecution

Alyson Pugh, Council Cabinet Member for Supporting Communities, said: “Swansea is proud to be called a City of Sanctuary and to be home to residents speaking almost 150 different languages.

“Everyone is welcome here and we have a long history of offering a home to people who have lost their homes and families. This status celebrates the welcoming attitudes of our residents and organisations.”

Funmilayo Olaniyan, an active committee member with Swansea City of Sanctuary, said: “We are delighted that the Council is lighting up the Guildhall.

“June 21 is the  anniversary of the celebration, held in the Brangwyn Hall eleven years ago, which marked the recognition of our wonderful city as the second City of Sanctuary in the UK, and the first in Wales.

“On July 16 we will also be hosting a webinar which will showcase some of the over 100 supporting organisations and how they have found different ways to welcome and include asylum seekers and refugees as well as will celebrate how people seeking sanctuary really have become part of the city. Everyone can find out more on our website. “