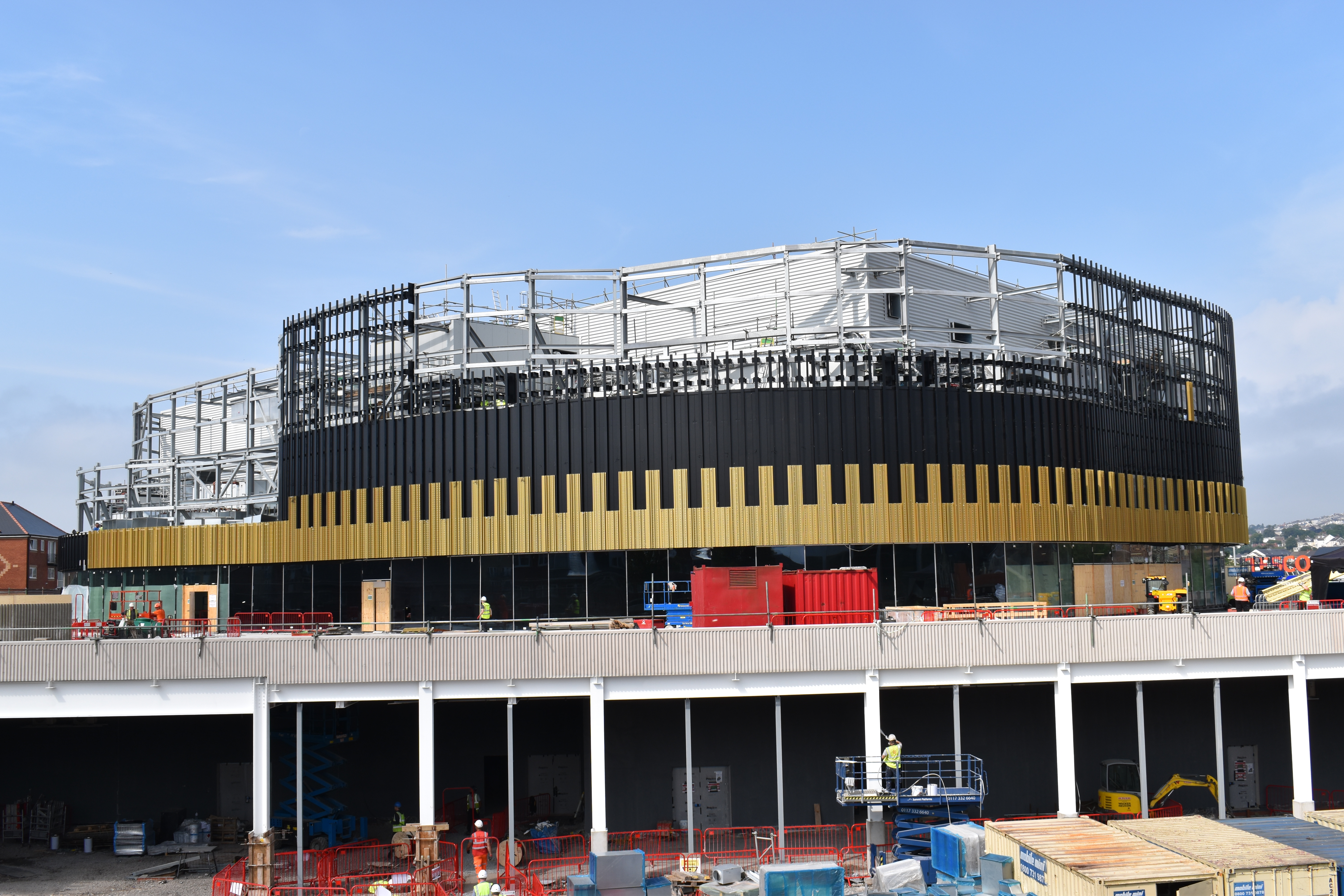 Installation of state-of-the-art gold coloured panels has now started at Swansea Arena. Each panel will be equipped with cutting-edge LED lighting technology, enabling the hosting of spectacular light shows around the outside of the attraction.

Once the arena is complete and open, the panels could also be used to promote upcoming shows, concerts, conferences and other events.

Over 1,600 gold coloured panels will be installed in total around the outside of the arena in coming months, complete with more than 95,000 LED lights.

The 3,500-capacity arena is one part of the emerging £135 million Copr Bay phase one district being led by Swansea Council and advised by development manager RivingtonHark.

Construction of Copr Bay phase one, being led by Buckingham Group Contracting Limited, is earmarked for completion this autumn.

Cllr Robert Francis-Davies, Swansea Council’s Cabinet Member for Regeneration, Investment and Tourism, said: “The installation of the gold coloured panels is yet more progress for the Swansea Arena development, which will be at the heart of the city’s new Copr Bay phase one district.

“The panels, once they’re all installed, will complement the colour of the Copr Bay bridge, generating a 21st century attraction that also celebrates Swansea’s proud copper-making heritage.

“The showing of content around the outside of the arena will help further raise the arena’s profile, while complementing other new digital technology that will play a role in the annual events programme.

“Construction on Copr Bay phase one has continued at pace throughout the pandemic. In combination with other on-going projects, this means Swansea’s economy is well-placed to recover from Covid-19, with thousands of jobs on the way for local people.”

As well as the arena and bridge, Copr Bay phase one also includes a 1.1-acre coastal park, along with new car parking, businesses and apartments.

The council is financing Copr Bay phase one, with some funding for the arena coming from the Swansea Bay City Deal. The Copr Bay bridge forming part of the scheme is part-funded by the Welsh Government’s Active Travel fund.

A second phase of the Copr Bay development is also planned. This phase, including a new public sector hub, will be worth £106 million a year to Swansea’s economy.