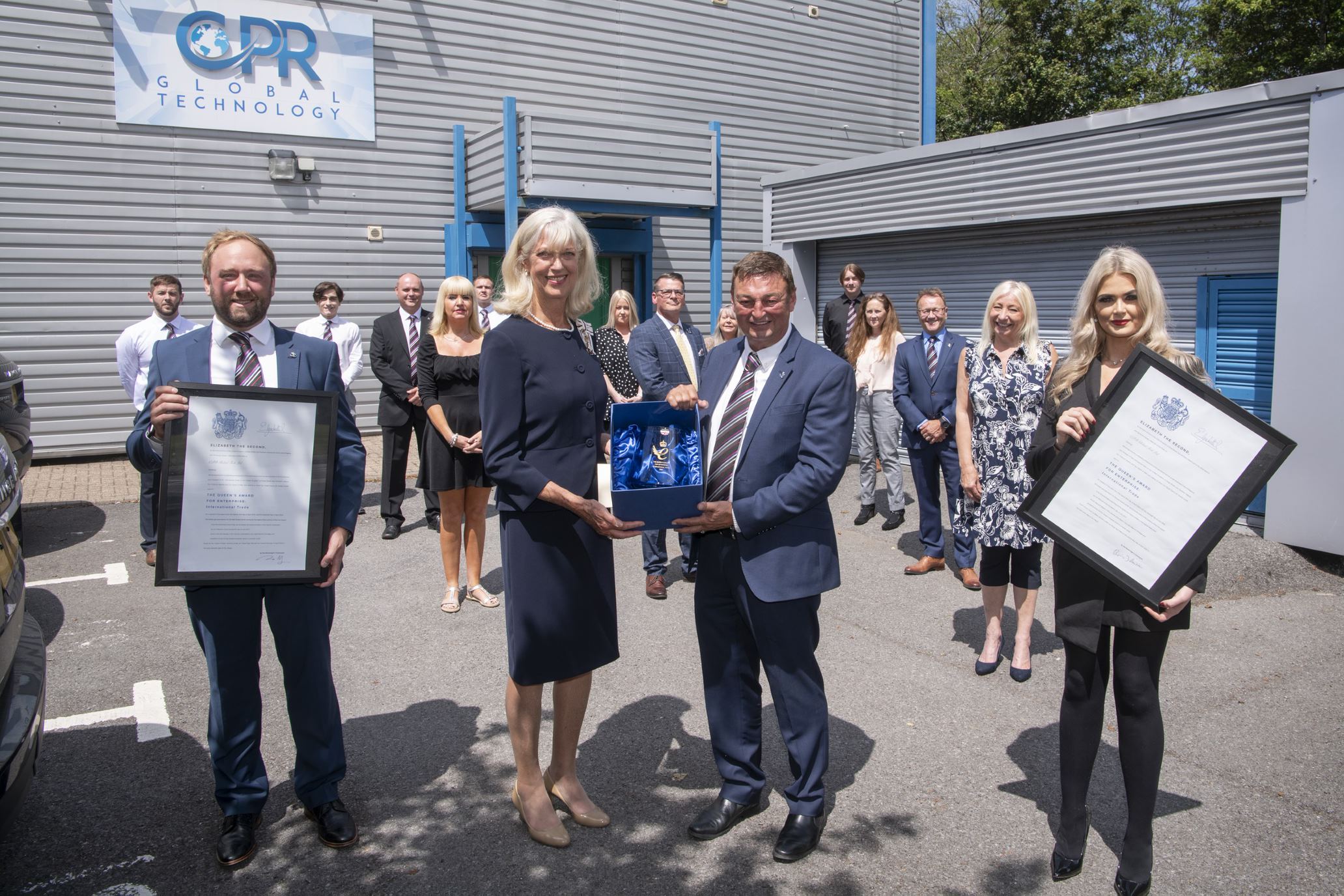 The company, which manufactures the world’s best-selling nuisance call blocking device, was honoured with a Queen’s Award for Enterprise: International Trade in April 2020 for a second time after winning the same prestigious award in 2018.

The socially distanced award presentation, which was postponed from last year due to the pandemic, took place at the company’s offices in Swansea Enterprise Park.

Lord Lieutenant, Louise Fleet, and one of her deputy lieutenants, Brian Thorne, presented the award in the presence of all staff members and key partners such as Swansea University who are working with CPR Global Tech on its latest product, CPR Guardian 3, which is an SOS personal alarm smartwatch with emergency alert button, fall detector, heart rate monitor and GPS location tracker.

The Queen’s Award for Enterprise annually recognises UK businesses for outstanding performance in one of four categories and CPR Global Tech was selected in the ‘International Trade’ category after achieving significant growth in overseas markets over the last three years.

CPR Global Tech was established in 2010 to tackle the growing problem of nuisance calls and produce a range of stand-alone call blocking devices that plug in to landline phones and allow the user to cut off and permanently block nuisance and scam calls.

As the issue of nuisance calls grew into a global problem, CPR followed suit and moved into foreign markets including the USA, Australia and throughout countries in Europe.

The Queen’s Awards for Enterprise are the UK’s highest accolades in recognising success in business and CPR Global Tech is one of a very small number of Welsh businesses to be awarded the honour.

CEO, Andrew Sandbrook, commented: “We were delighted to welcome the Lord Lieutenant and her deputy to our headquarters and talk to them about how the company has progressed since we were established in 2010.

“We have worked tirelessly towards eradicating nuisance calls and we intend to use our award win as a springboard to carry on the fight and also grow our other care technology products such as the CPR Guardian 3 Smartwatch, to help protect those who are amongst the most vulnerable in society.

“To receive this prestigious award for a second time, especially after such a tumultuous year, is such an incredible boost and is testament to all the hard work put in by every member of staff over the last 11 years.”

After expressing regret that she was unable to shake hands, the Lord Lieutenant spoke about the magnitude of CPR’s achievement for a second time, she said: “To win one Queen’s Award for Enterprise is a great achievement but to win two is outstanding.

“The Queen’s Award foe Enterprise is the most prestigious award a UK company can achieve. A company’s submission is rigorously scrutinised by industry and business experts which means that those who win the award really have attained the highest standards in all aspects of the business.

“Winning this award means that CPR Global Tech are recognised across the globe as a company of excellence and I hope that this will further increase their overseas sales and global recognition.”

For more information on CPR Global Tech and its range of products please visit: www.cprglobaltech.com