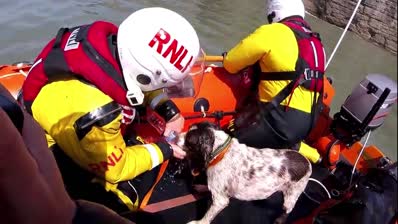 Ollie the springer spaniel had entered the water at Newton Beach but failed to return to shore, instead continuing to swim out to sea. The dog’s owner contacted the Coastguard by dialling 999 to get help after becoming increasingly concerned for his welfare.

Porthcawl RNLI’s volunteer crew were initially paged by UK Coastguard at 8.10am and launched the charity’s D Class lifeboat, Super G II. The crew carried out a thorough search of the area in which Ollie was last seen. Conditions on scene were very calm seas with excellent visibility. Porthcawl’s Coastguard team were also tasked to conduct a shore based search.

Following a search of over one hour, in which there was a high hopes the dog would be found due to the conditions, the lifeboat was stood down by the Coastguard and returned to station based, on the assumption the dog had made it to shore.

Porthcawl RNLI helm Simon Emms said: “We launched first thing this morning and carried out a through search of the area in which Ollie was last seen, extending as far as Ogmore, but we were eventually stood down and could only assume that with no new information or sightings, Ollie had made it ashore somewhere along the coastline.

“At 11.31am we were tasked again by the Coastguard and launched the D Class lifeboat for a second time following a possible sighting of Ollie at the base of cliffs in Southerndown. We made best speed to the location and we were delighted to find Ollie safe and well having been spotted and assisted by a kayaker who had been in the area. Ollie was then recovered onto the lifeboat for the journey back to Porthcawl.

“It’s incredible that Ollie had spent over 3 hours at sea when he was found and was around 3 miles from where he’d first gone into the water. He seemed very happy to see us and enjoyed his ride on the lifeboat back to Porthcawl.”

‘The owner did the right thing by contacting the Coastguard. If your dog gets into difficulty in the water go to a place it can get to safely and call it – they’ll probably get out by themselves. Never enter the water after your dog as you could get yourself into trouble too. Dial 999 and ask for the Coastguard.”

Related Topics:DogsfeaturedPorthcawlrescueRNLIspringer spaniel
Up Next