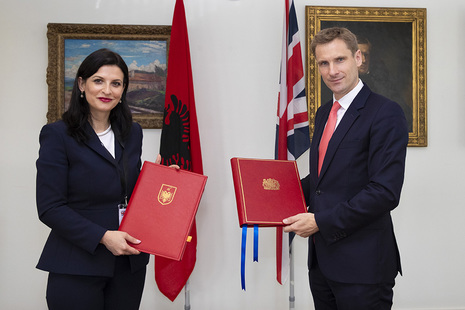 The deal means more offenders can be sent back to serve their full sentence in Albania, with victims assured they will still serve the full sentence imposed on them by a British judge.

Taxpayers will no longer have to pay to accommodate these offenders, and those transferred will be barred from returning to Britain, giving further peace of mind to victims.

UK and Albanian justice Ministers, Chris Philp and Etilda Gjonaj, formally approved the Prisoner Transfer Agreement in London this morning. The agreement works both ways and includes provisions for British criminals in Albanian jails to be returned to the UK.

Albanian nationals currently represent the highest percentage of foreign nationals in custody with more than 1,500 in prison in England and Wales – around 10% of overseas criminals in jail. The UK does not collect statistics on British prisoners in overseas jails, but the number imprisoned in Albania is thought to be extremely low.

Minister for Immigration Compliance and Justice, Chris Philp, said: “We are committed to removing foreign criminals who have abused our hospitality and inflicted misery on our communities.

“Someone who commits a serious crime in the UK should be barred from returning so that the taxpayer no longer has to pay for them and victims can be confident justice has been done.”

Since January 2019, the Government has removed 7,985 foreign national offenders from our prisons, immigration removal centres and the community.

The deal builds on an earlier agreement and means that offenders must spend at least the same amount of time in custody as they were sentenced to by a judge in the UK.

It also clarifies that prisoners can be transferred without their consent and outlines the information that receiving states need in an application – speeding up the process.