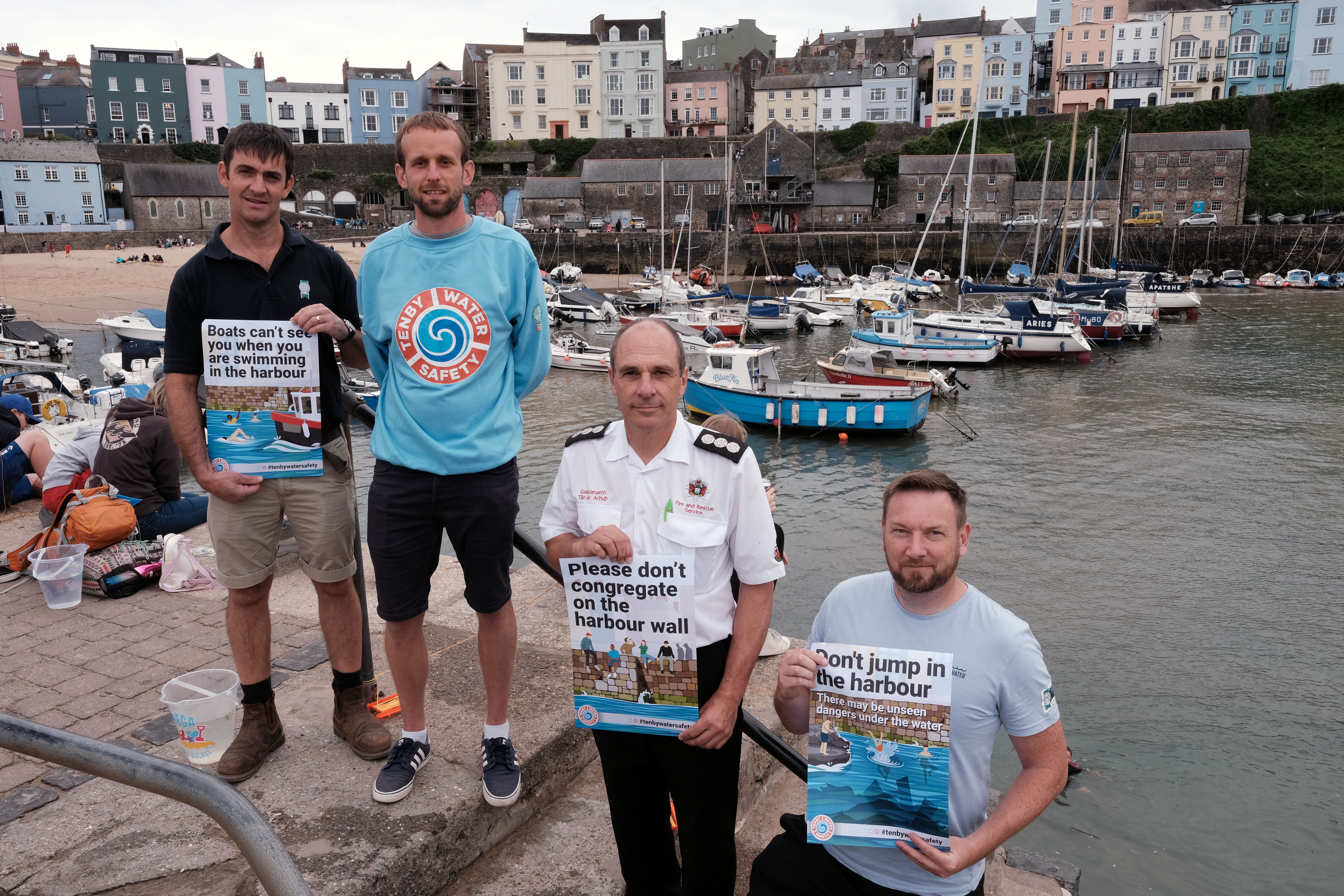 The dedicated work of a Tenby team promoting water safety has been hailed following one of the busiest summers on record.

The Tenby Water Safety Initiative is made up of representatives of Pembrokeshire County Council, Mid and West Wales Fire and Rescue Service and the RNLI.

Throughout the summer the group has been providing water safety advice alongside banners and posters supported by social media messaging, highlighting potential dangers of the waters around Pembrokeshire.

Local shops and businesses supported the messaging by displaying posters and stickers in their premises.

Tenby Harbour has been a particular focus, where Water Safety Group members have engaged with the predominantly young people who have traditionally jumped into the water from the harbour walls.

Those wanting to jump have been informed of the dangers, including the fact that boats often cannot see people swimming as they approach the harbour.

Harbourmaster Chris Salisbury, said: “I would like to thank all the agencies that provided time and input to the Tenby Water Safety group.

“While we have not stopped the jumping at Tenby Harbour it has proved to be a great opportunity to raise awareness and has provided vital safety information around the dangers of jumping into all waters not just Tenby Harbour.

“The information has been delivered in many different formats across the county to best reach the young people of Pembrokeshire and visitors alike.”

RNLI Lifeguard Manager Chris Rigby said that so manyaccidents that happen around the coast could be avoided so it was great to be part of the Tenby Water Safety Initiative to try to help reduce the the number of people getting into trouble.

Chris added: “The Tenby Water safety initiative has demonstrated that Multi Agency work had succeeded in informing members of the public of the dangers in and around the working Harbour of Tenby.

“It has allowed us to take a non-authorative approach to engaging with tourists, holiday makers, and locals alike and has provided a platform for us to promote the safe use of waters in and around the harbour whilst enjoying the picturesque scenery and atmosphere.”

This will also aim to reduce the anti-social behaviour that is sometimes associated with the dangerous use of the harbour area.

Kelly Davies, Senior Practitioner, Pembrokeshire Youth Service and Lead for Tenby Water Safety, commended the efforts of all those involved.

“By bringing together experts in the field of water safety and local knowledge we have been able to approach the initiative from an information, factual point of view and have tried to make the message very clear to all who visit Tenby. Enjoy our waters, but do so safely and know the dangers.”

Kelly added: “I would like to thank the Harbourmaster, Mid and West Wales Fire and Rescue, the RNLI and Leisure services for their continued support and commitment in raising the awareness of the Tenby Water Safety Initiative.’

In any marine emergency, dial 999 and ask for the Coastguard.

YOU MAY HAVE MISSED….

Related Topics:Mid and West Wales Fire and Rescue ServicePembrokeshireRNLITenbyWater Safety
Up Next

As applications open for new firefighters, recent recruit Sioned says: “If it scares you, go for it!”