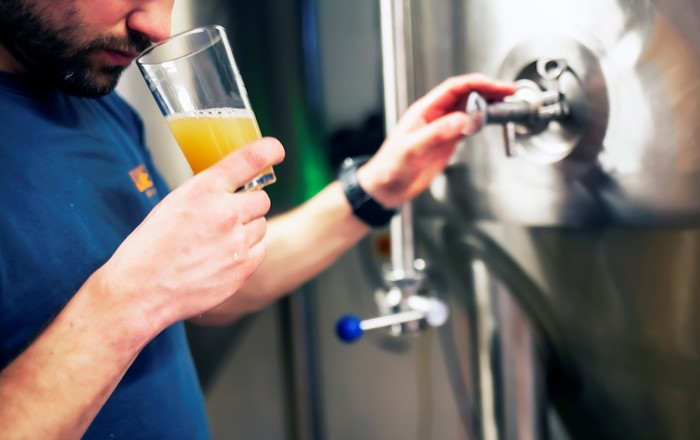 Swansea University bioscientists have teamed up with a West Wales microbrewery to help it reduce its CO2 emissions.

They will be working with Pembrokeshire’s Bluestone Brewing Co using the CO2 emissions produced from the brewing process to cultivate microalgae which can then be used as biomass in a range of products.

If successful, it is hoped that the solution will be replicable for other small scale CO2 producing companies.

The craft brewery has won several awards over the years for its efforts at sustainable production as part of its quest to become a carbon neutral company.

Bluestone’s Simon Turner described this collaboration to capture CO2 naturally produced by the action of yeast in the brewing process and to turn it into valuable biomass as its most ambitious project yet.

The brewery, based in Newport, has joined forces with a team of bioscientists led by Professor Carole Llewellyn from the Faculty of Science and Engineering.

She said: “Microalgae, like plants, use CO2 to grow and for energy.  In this exciting project we will grow algae using the CO2 emissions from the brewery.

“The resulting algal biomass will then be processed, and subsequently presented to Phytoquest Ltd, the third-party member of the collaborating team, which specialises in natural product discovery and development of sustainable ingredients for use in the food, pharmaceutical and cosmetic industries.”

Mr Turner said: “We approached Swansea University as we believe that, though we probably have the engineering capabilities and knowledge to fabricate and adapt our equipment to capture CO2, the problems of safe storage, movement and processing that CO2 seemed insurmountable.

“We were interested to discover Professor Llewellyn and her team have both the experience and expertise to guide us through the process and the research facilities with which to work out the most efficient methods of using the CO2.”

The project is partially funded by the Welsh Government ERDF SMART Expertise Programme which aims to support collaborations between industry and academic institutions.