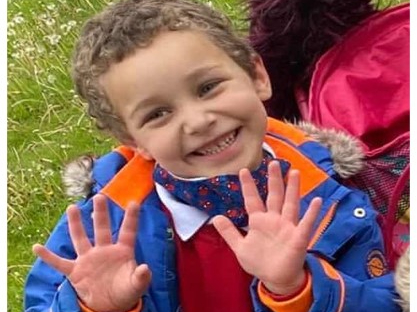 Three people have been convicted of murder following the death of a five year-old child in the Sarn area of Bridgend last summer.

Logan Mwangi’s body was found by police officers in the River Ogmore at around 6am on Saturday, 31st July.

The discovery was made by police shortly after the 999 call made by Logan’s mother, Angharad Williamson, who, together with defendants John Cole and a 14 year-old boy who cannot be named for legal reasons, appeared at Cardiff Crown Court charged with Logan’s murder.

During a 10 week trial, the court heard how the defendants had colluded to cover-up Logan’s murder in the hours that followed his death.

The 999 call made by Logan’s mum was played at court – she initially claimed her son was missing from home.

Police bodycam footage was also played in which Logan’s mother pleaded with officers to help to find her son, having later alleged another female had taken him.

Logan’s body was located by police shortly after their attendance, laying in the River Ogmore, in close proximity to the family home.

Police officers soon became suspicious, and as the investigation progressed CCTV recovered from a nearby house captured John Cole and the youth defendant taking Logan’s body from the house in the early hours of the morning.

When questioned in police interview, Logan’s mother Angharad claimed to have slept through the night, denying that was responsible for switching lights on and off and moving curtains inside the flat which was captured on CCTV.

A Home Office Post Mortem carried out on Logan found that he had suffered more than 56 injuries. A pathologist described some of them as so extreme, you would expect to find them as a result of a fall from great height or a high speed road traffic collision.

Earlier today, Cole, Williamson and the 14-year-old were all convicted of murder and perverting the course of justice. Sentencing will take place at a later date.

“It is difficult to imagine how Logan must have suffered at the hands of those who he trusted, and inconceivable that those who should have loved and protected him betrayed him in the worst possible way.

“Attempts to cover up the crime in the hours following Logan’s death and the subsequent web of lies and deceit that were to follow, are an indication of their callousness and lack of remorse.

“The impact of Logan’s tragic death on so many people cannot be measured.

“Nothing can bring Logan back, but I hope that today’s outcome will bring some comfort to those who loved him.”

“We will continue to provide specialist support to those affected and I would like to encourage those from the local community who continue to be affected to reach out for support.

“I would also like to pay tribute to the professionalism displayed by police officers and emergency service colleagues who were faced with the most traumatic scenes imaginable back in July of last year and thank my team of detectives who have worked tirelessly on this investigation, together with the Crown Prosecution Service and Prosecution Counsel.

“The efforts of all involved have contributed to today’s outcome.”

Related Topics:BridgendmurderSouth Wales Police
Up Next

Swansea man sentenced to 11 years for sexual offences against children