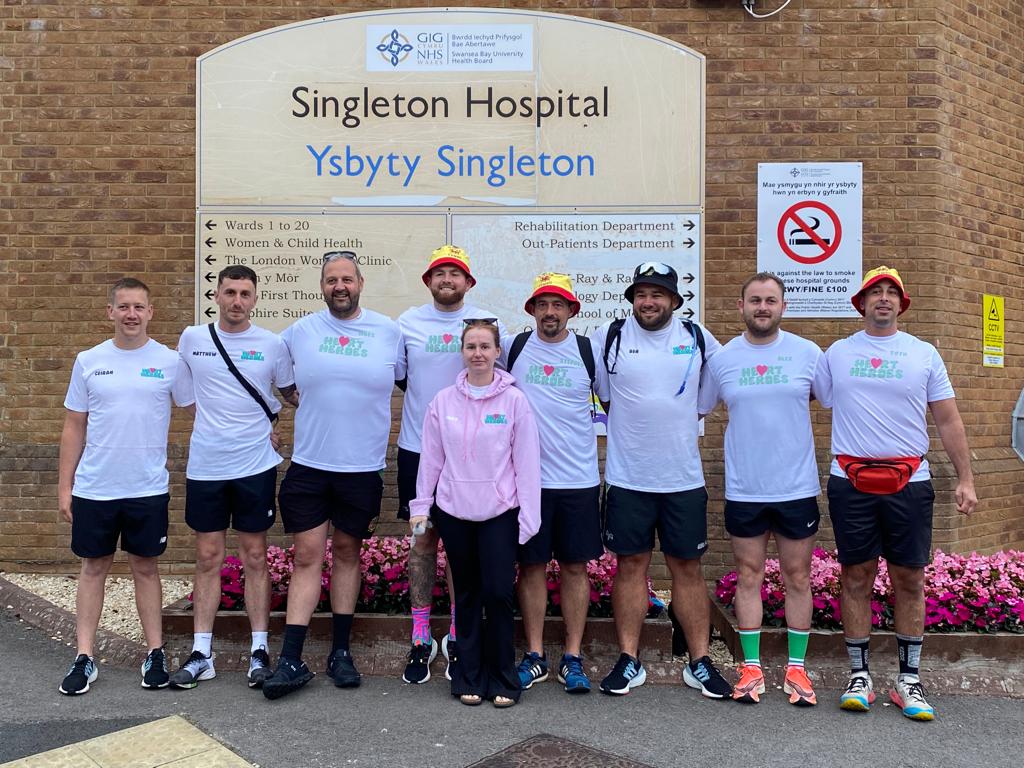 Swansea stonemason Mathew Mariani and a group of intrepid friends have trekked 90 miles non-stop, raising around £12,000 for a charity which supports his daughter.

Little Esme, now 18-months-old, has a congenital heart condition, which was diagnosed when she was just ten days old. She had open heart surgery at six months and may need further treatment as she grows up.

The charity Heart Heroes, which has a Hub in South Wales, provides support for children with congenital heart conditions, and their families. Esme’s mum, Emily Bowen, has just become the Hub coordinator, running events and meet-ups for families, so they can help one another.

Mathew, 34, along with seven friends decided to walk from Singleton Hospital, where Esme was born, to Bristol Royal Infirmary, where she underwent her surgery – 90 miles in total, which the group completed in 31 hours, walking non-stop.

They were encouraged along the way by videos sent to them from some of the Welsh national rugby team. There to cheer them at the end were Esme, and mum Emily, 29.

“Esme was born on New Year’s Day and had only been home for five days when we noticed her breathing wasn’t right, so we took her into an out-of-hours clinic. They sent her straight to Morriston Hospital where she was put into the high dependency unit. There was even talk of airlifting her to Cardiff, because she wasn’t stabilising. Fortunately, they managed to get things under control and she was later moved to Cardiff,” said Mathew.

Esme has AVSD – complete atrioventricular septal defect – a condition where there are holes between the chambers of the right and left sides of the heart, and valves controlling the blood flowing between them may not be formed correctly. The surgery she underwent closed a hole between the chambers and formed a new valve.

“The whole of January was crazy. Emily and I were just passing each other as we took it in turns to be with Esme, because at the time there were Covid restrictions in place. The only time we were together at the hospital was for her diagnosis. Esme was in Cardiff for a couple of weeks, then back to Morriston again, so she was in hospital for about a month altogether.”

So far, Mathew and his friends have raised a staggering £12,000 for Heart Heroes through the walk and other fundraising activities.

“We heard about the charity when we were in Bristol and we met another Hub coordinator, who was on the ward at the same time as us. We have found it really supportive, because unless you have gone through this experience yourself it’s hard for people to understand.”

Kelly Cornish, Heart Heroes founder, said she was very grateful to Mathew and his friends for their fundraising. “We rely on donations to run all our events and activities, and this is a significant amount for us. Not only that Mathew and Emily, are helping to spread awareness of Heart Heroes so we can help more families like theirs.”

To make a donation to Mathew’s fundraising, visit https://www.justgiving.com/fundraising/mathew-mariani2.