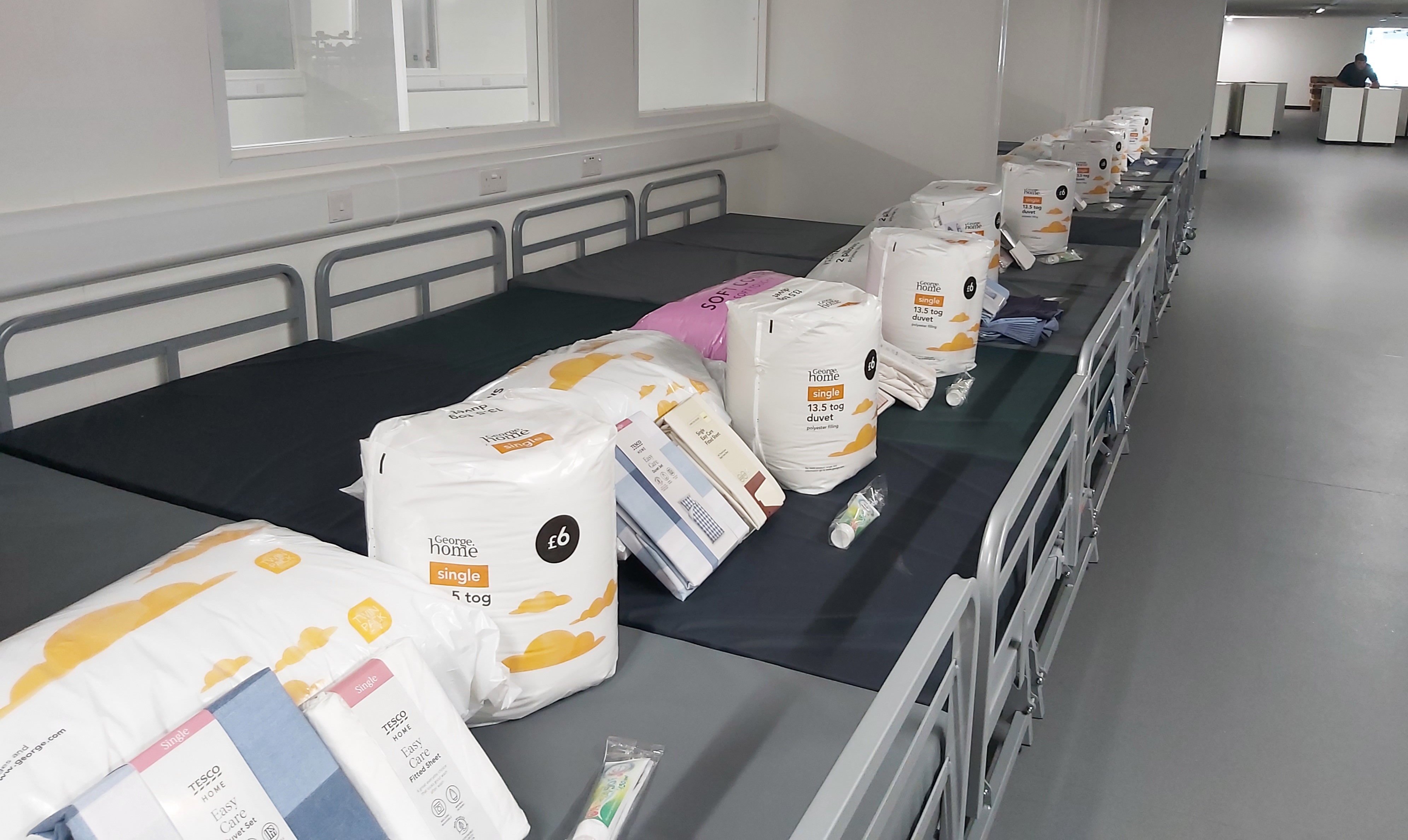 Almost 600 new beds from the Bay Field Hospital have now been distributed and are helping Ukrainian refugees and local communities in Swansea Bay.

Three months after Swansea Bay UHB offered to donate the 595 unused beds from the Bay Field Hospital to people in need, all the beds have now been allocated.

Sadly, bed poverty, where families do not have adequate beds, mattresses or bedding, is a concern in Swansea and Neath Port Talbot. Cases of people sleeping on sofas; on home-made mattresses stuffed with old clothes, or children ‘topping and tailing’ in a shared bed are being reported.

The unused field hospital beds were meant for short-term emergency use only, and too basic in design to use in general wards in main hospitals. However, the beds are plenty sturdy enough for long-term use in domestic settings.

The beds have now been allocated to help local families who need beds, and also Ukrainian refugees, with many beds sent to camps in Eastern Europe.

Just 10 beds physically remain in the field hospital, and they will shortly be delivered free of charge by local removal company Britannia Robbins, to families with children in the health board area, along with supplies of new bedding kindly donated by our staff and local companies.

Other items of spare field hospital furniture and equipment are also now going to Moldova to a children’s hospital for Ukrainian refugees.

Swansea Bay UHB Chair, Emma Woollett said: “We are so pleased that these beds and furniture are being put to such good use and helping people who really need them, both in Eastern Europe and here in Swansea Bay.

“The NHS is not only here to care for people when they are poorly. We want to support and promote health and wellbeing in a holistic way.

“At Swansea Bay University Health Board we are striving to be a more sustainable organisation. Donating these beds is a practical way to offer support, and it also means that the beds will not end up in landfill – so it is good for the environment as well.

“Having the beds used for refugees means they are also being put to just the kind of emergency use they were designed for.”

Jeremy Miles MS for Neath and Welsh Government Minister for Education paid a visit to the Bay Field Hospital to inspect the last 10 beds which are destined for local schoolchildren and hear about the work that has been done.

He also had the opportunity to see other equipment like bed side units, drip stands and privacy screens, which, like the beds. were all designed for short term use and not suitable for main hospitals, being loaded up onto lorries to equip a children’s hospital in Eastern Europe. The hospital is being built as part of the ongoing support for Ukrainians fleeing their war torn country.

The lorries will be driven to Moldova by the Communications Workers Union’s charity, CWU Humanitarian Aid. The charity has already delivered 250 Swansea Bay field hospital beds to Ukrainian refugee camps.

The health board was put in touch with the charity through Mr Miles, who said: “The heroism of the Ukrainian people humbles us all. At the borders, hundreds of thousands of refugees, the vast majority of whom are women and children, are in desperate need but here in Wales we can play out part too.

“I am proud that my office could facilitate the links to make this happen and through a true partnership approach, enable beds and furniture acquired for one crisis, being used to support another.”

Amanda Davies, Swansea Bay UHB Service Improvement Manager, said: “The health board has been able to work with our partners in helping us identify vulnerable people in our community who are in need of a bed. Between us we have been able to help address the issue of bed poverty in our area.”

She added: “The rising cost of living crisis is impacting upon so many families. People’s priorities are to buy food and to pay bills in order to keep a roof over their heads. Purchasing items of furniture such as a bed is placing added financial pressures on families who are already struggling.

“We know that in Wales, one in three children live in poverty and it is estimated that in the UK, 500,000 children do not have a bed to sleep in. Being able to have good quality sleep is important for everyone’s health and wellbeing.

“Children who are sleep deprived as a result of not having a bed to sleep in will struggle to concentrate in school and this has a direct impact on their education which will affect their future life chances.

“The Wellbeing and Future Generations Act requires us to think about the long term impact of our decisions, work better with people, communities and each other to bring about long lasting positive change. Donating these beds is very much prevention in action.”