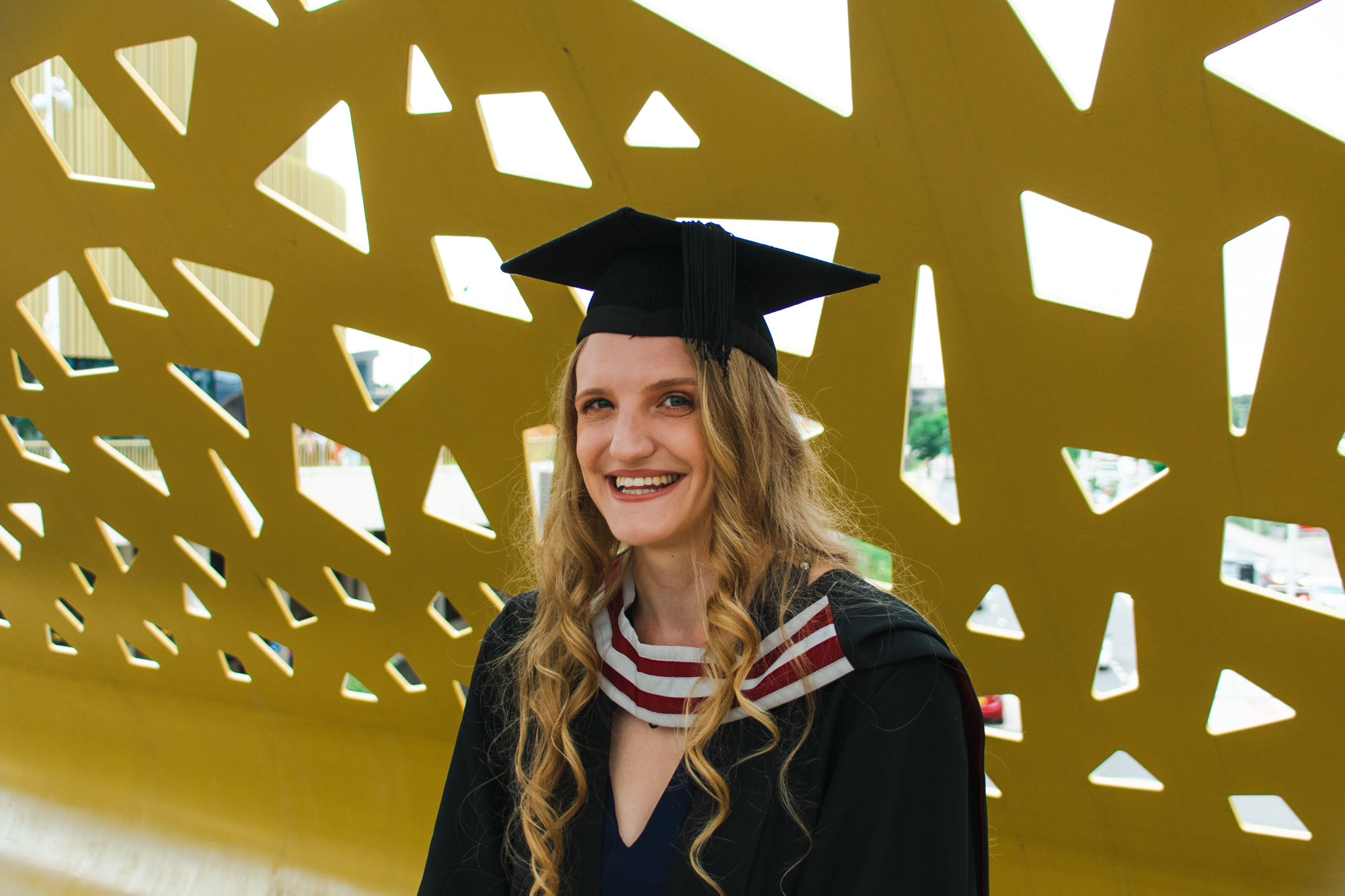 A woman who is amongst the first in her family to go to university, and who has Asperger’s Syndrome and ADHD, has paid tribute to all who supported her, encouraging others to follow in her wake, as she graduated with a master’s degree – with distinction – in History at Swansea University.

Jessica Smith, from Shirley in the Midlands, received her degree on the stage at Swansea Arena this week, capping a record of stellar achievement at Swansea.  She was awarded a BA (First Class Honours) in History and Geography in 2020, before undertaking the MA.

Her road to success, however, was far from easy.

Few people in Jessica’s family or local community had been to university, so even to apply was a big step.  Yet Jessica faced even more challenges as she had been diagnosed with Asperger’s Syndrome which is an Autism Spectrum Condition (ASC) as a teenager.  In her own words, “I was very much breaking the mould.”

Jessica says that having an ASC is sometimes difficult but some of the things a person with ASC can do is beyond what a neurotypical person can – and so believes it can be a positive advantage.  But a lack of diagnosis and specialist support whilst at school meant that she found traditional classroom learning very difficult.   However, once she got to sixth-form college, she was able to get the support she needed, which included encouraging her to think about university.

Backed all the way by her parents Debbie and Gary, Jessica began to look at universities with a view to applying.

Jessica says: “Two things about Swansea caught my eye – the picture of a surfer on the beach next to campus that was on the prospectus, and the fact that they had a specialist support team for students with an ASC.   None of the universities I had been looking at offered either of those things.

“A friend and I came to an open day and we both ended up studying at Swansea!”

Swansea University has a dedicated ASC team, which supports students from the time when they first accept a place, to arriving and settling in and throughout their studies.

One crucial resource is the Eureka group, a social group for students who have difficulty meeting new people, or who have an ASC, or who think that they may be on the spectrum even if they don’t have a diagnosis.

Jessica described the support she had received which led to her achievement: “The support from Swansea’s ASC team was amazing.  It really helped me grow in confidence.  It can be tough for anyone, but for people with an ASC, starting university and mixing with new people can be especially difficult.

“One thing that helped me enormously was flexibility about assessment, which for me meant choosing exams rather than coursework as much as possible.

“But I’ve flourished in other areas too, not just with my studies.  I worked as a senior student ambassador, showing round prospective students on open days, and using my organisational skills to help streamline operations. At the University’s Welcome Week, I also created an ASC safe space for people on the day.

“I took part in triathlons and athletics and have won a bronze in the Welsh relays.

“For someone with an ASC to do all of these things is quite something, and the support of the Swansea team was invaluable.

“I’ve also been fortunate to have had so much support from my parents, who worked so hard, and my boyfriend, who also graduated from the University this week.  My success would not have been possible without them.”

Asked what she would say to people who face similar challenges to her, Jessica said: “My message is: whatever your background, you can achieve.

“And if you have an ASC, don’t let the stigma other people place on it hold you back. You can reach your goals, whatever they may be, and although support is a wonderful thing, don’t feel like you always have to be wrapped up in cotton wool.

“It will be hard.  People with a disability have to work so much harder to achieve success.  Get your head down, get organised, find out about the support available to you, and do take time off to enjoy life too.

“If you’re thinking about university, make sure you find one that you know offers the support you need to achieve, both academically and more widely.  That’s so important.

“Aim high – and don’t let anyone hold you down.”