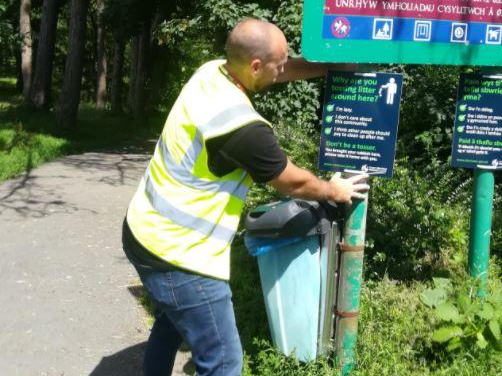 Swansea Council is launching a major recruitment campaign it says will boost its front-line cleansing teams and make sure every ward gets the chance for a spruce-up.

Seventeen street cleansing team jobs are up for grabs at the council as part of a clampdown on littering that will help keep communities clean.

Successful applicants will be part of a new Cleansing Ward Operative Team which will head into every ward in Swansea starting in August to do deep cleans and tackling major littering and fly-tipping jobs.

Their work will be on top of the millions of pounds a year the council already spends tackling litter, graffiti and fly-tipping.

He said: “We’ll be recruiting people who take a pride in Swansea and want it looking its best. The teams will visit every ward in Swansea on a rotating basis.

“It’ll be like the hugely-popular PATCH team which does a similar job for road improvements and repairs.”

Cllr Anderson added: “Introducing the Cleansing Ward Operative team is one of more than 60 policy commitments we’ve pledged to make progress on in the first 100 days since they were adopted by the council earlier this month.

“Cleaner streets and communities is one of the priorities of the people of Swansea and we’re determined to play our part. We’d urge the public to do their bit as well by not littering in the first place and by reporting issues where they see them.”

Cllr Anderson said: “The council already spends well over £2m a year on dealing with littering and cleaning up after people who think it’s OK to dump their waste because it’s someone else’s job to keep our communities tidy.

“Our new team will help us to do even more to clear litter in communities. But we’re also urging people to do their bit by taking their rubbish home with them if they can’t find a bin or the bin happens to be full.”

The new team is expected to make a start in August with the new recruits joining later. It’ll visit every ward in the city, responding to requests from councillors or members of the public.

The council already hand-picks litter on beaches every day during the busy summer months, cleans-up the city centre and collects tonnes of litter and dog waste from bins every week.

New team members will get full training ahead of being deployed for the first time in the autumn. Apart from littering, they’ll also tackle issues like dog fouling, weed removal, graffiti and fly-tipping.

They will also be trained to search waste for evidence that could identify those who dumped it so that fixed penalty notices can be issued for illegal dumping or potential court cases pursued.

Swansea City players will no longer take the knee before matches