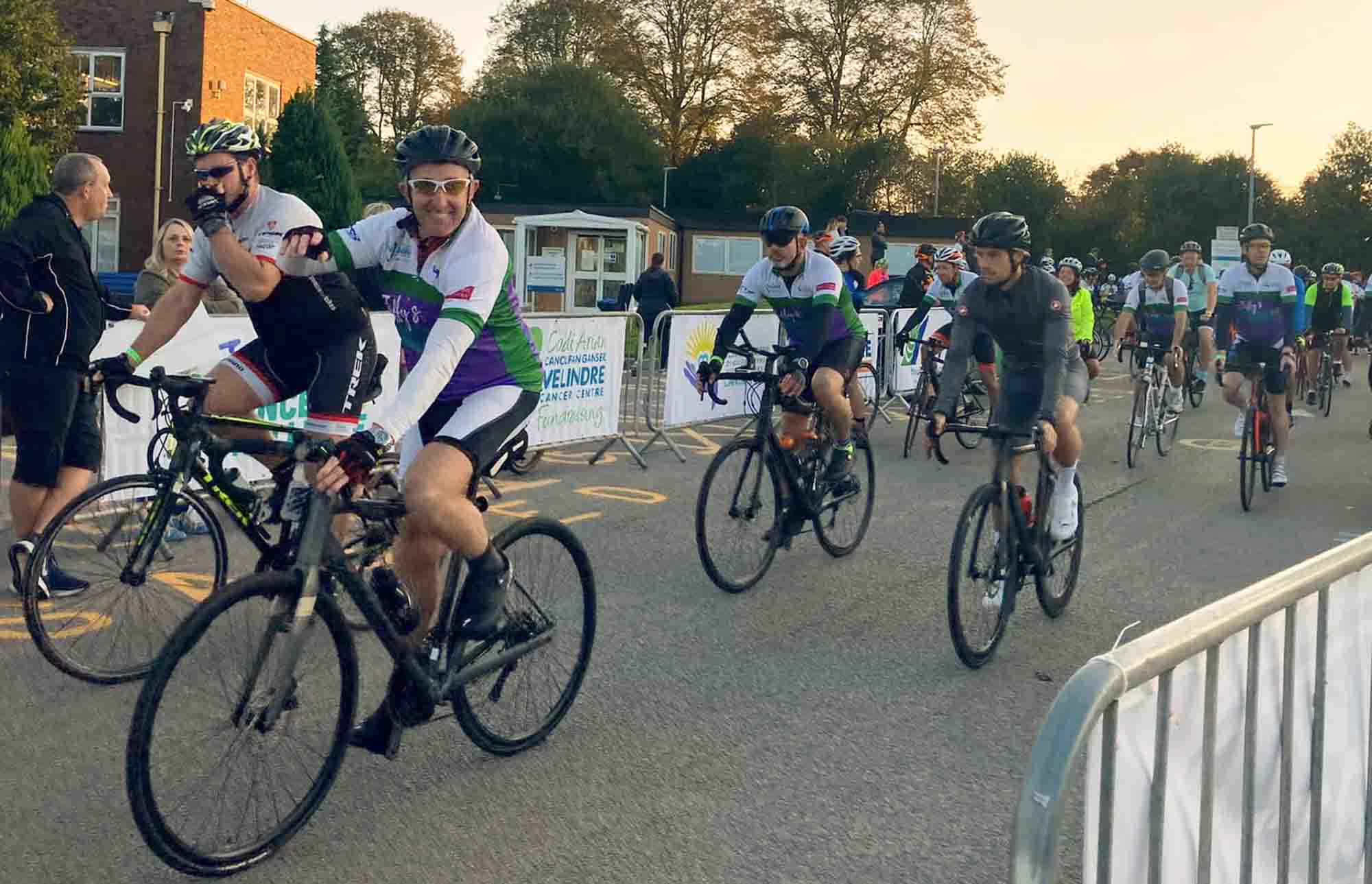 This is a 50-mile ride from Cardiff to Swansea, with the funds raised donated to cancer services at Velindre and Singleton hospitals.

As President of Velindre Fundraising, Jonathan – Jiffy – has supported patients and their families at Velindre Cancer Centre since 2008.

Last year he decided to extend this, launching the first Jiffy’s Cancer 50 Challenge for both Velindre and the South West Wales Cancer Fund.

It was a huge success, raising £118,000 in sponsorship which was shared equally between the two charity funds.

At Singleton, home of the South West Wales Cancer Centre, the donation went to the newly-established Radiotherapy Research Fellow Fund.

She said: “We are really grateful for the money that was raised last year through Jiffy’s Cancer 50 Challenge.

“We have been able to use this money to continue to fund trainee oncologists who will spend a period of time with us undertaking research.

“Some of the things we have done with the research is look at the role of protons.

“This is a new way of delivering radiotherapy which may help to spare the normal tissues around the tumour while effectively hitting the cancer, which could help reduce side effects.

“We are also currently looking at how radiotherapy can be used to treat stomach cancers.

“It’s an area where radiotherapy isn’t used as much as other areas in the body.

“So we are looking at how we might be able to safely use radiotherapy that will become part of a clinical trial in the future.”

For example, during Covid, Singleton was able to implement the findings of a UK study of patients receiving breast cancer radiotherapy.

This allowed the safe reduction in the number of radiotherapy treatments from 15 over a three-week period to just five during a single week.

Dr Gwynne said: “This is clearly beneficial to the patient as it reduces the number of times they have to come to hospital with no difference to the outcome.

“It has transformed how we treat breast cancer.

“But there are also benefits to the service. If we can treat patients in a week rather than three weeks, this helps with waiting times.”

Entry costs £50, which includes a cycling jersey, and riders are being asked to raise a minimum of £50 in sponsorship. Again, proceeds will be equally divided between the two cancer funds.

Charity has been at the heart of the South West Wales Cancer Centre throughout its 18-year history.

It opened in September 2004 following a massive fundraising campaign by people from across Swansea, Neath Port Talbot and West Wales.

They raised more than £1 million, which contributed to additional funding by the NHS to ensure the centre was built.

It provides access to modern chemotherapy and radiotherapy units. The centre also has an inpatient ward at Singleton, and a research unit.

The cancer centre’s charitable fund is one of 265 managed by Swansea Bay Health Charity.

This is the health board’s official charity, supporting patients, staff and services within Swansea Bay. Donations to the various funds are used for equipment, research, training and patient care.

The Jiffy’s Cancer 50 Challenge is an opportunity to continue that legacy, and anyone wanting to join can sign up at cancer50challenge.co.uk.

It is sponsored by Andrew Scott and supported by Peter Lynn and Partners, Cycle Solutions and European Telecoms Solutions. The ride is organised by White Rock Events.

Jonathan said: “What a great success it was last year. We hope to make it bigger and better every year – more importantly, raising money for both great charities.”

“It allows us to continue the research that we have been doing in Swansea that will benefit not only the patients of South West Wales but will help the population of the UK and further afield.”

Lead image: Flashback to 2021 and Jiffy’s arrival at Singleton Hospital at the end of the challenge (Image: Swansea Bay NHS)