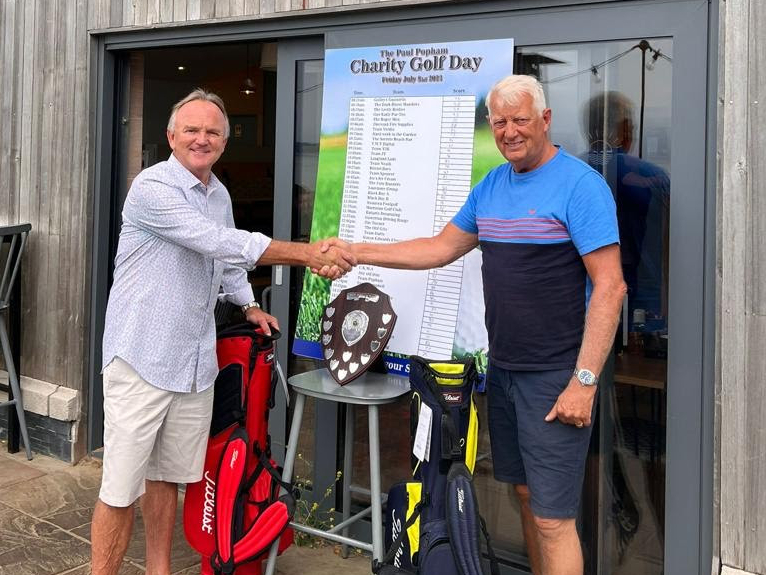 Golfers from across South Wales came together at Clyne Golf Club to compete and raise funds for Swansea-based kidney charity, Popham Kidney Support, at its annual Golf Day last month.

The competition, organised by Kim Loosmore, raised an impressive £10,020.72, which will contribute to the effort the charity is making to raise £130,000 for the refurbishment of the Children’s Kidney Centre Outpatient Department in Cardiff.

The total raised at the event has meant that Popham Kidney Support has surpassed a significant milestone of £50,000.

Since 2016, Popham Kidney Support has been the sole beneficiary of the annual golf competition, with the focus of the fundraising to support Children with kidney disease on various projects. This years project being to aid with the charity’s long-term goal of providing the total funds for the refurbishment by March 2023.

Currently, there is very little natural light in the department, making it a dark environment. The refurbishment will maximise the natural light, creating a more welcoming, warm and comfortable place for children to undergo treatment. The aim is to create a more inviting, calming and receptive area for both children with kidney disease and their families.

This year’s event saw a record 28 teams enter, continuing the trend of year-on-year increases. Popham Kidney Support puts this largely down to the stellar organisation and promotion of the event by Mr Loosmore, and meant that the charity has now reached £50,000 of its £130,000 target.

The winners on the day were the Secret Beach Bar & Kitchen, followed by The Dark Horse Mumbles, Gower Auto’s, Shaftec Automotive Components and women’s team – The Lively Birdies. In addition to the golfing aspect, the event also included a fundraising dinner, presentation, raffle and auction.

Jo Popham, CEO of Popham Kidney Support, said: “We’re once again delighted with the immense support from everybody involved who have helped us raise a fantastic total of £10,000. This is an amazing contribution to our target, and has meant we have surpassed the significant milestone of £50,000.

“We’d also like to say a huge congratulations to the winners: Secret Beach Bar & Kitchen. We are grateful to everyone who took part for their generosity, with particular thanks going to Mr Kim Loosemore for his hard work in once again organising and promoting the event.”

Kim Loosmore, Annual Golf Day Organiser, said: “I hope everyone enjoyed as it was a wonderful occasion. It was fantastic to see another great turnout, with 28 teams entering this year. Thank you to the participants and supporters for their support and generosity.

“The money raised goes to a great cause, and it’s wonderful to be able to help the Popham Kidney Support in their effort to raise £130,000 for the much-needed refurbishment of the Children’s Kidney Centre.”

Dobbies search for Swansea’s ‘Not Your Average Gardener’