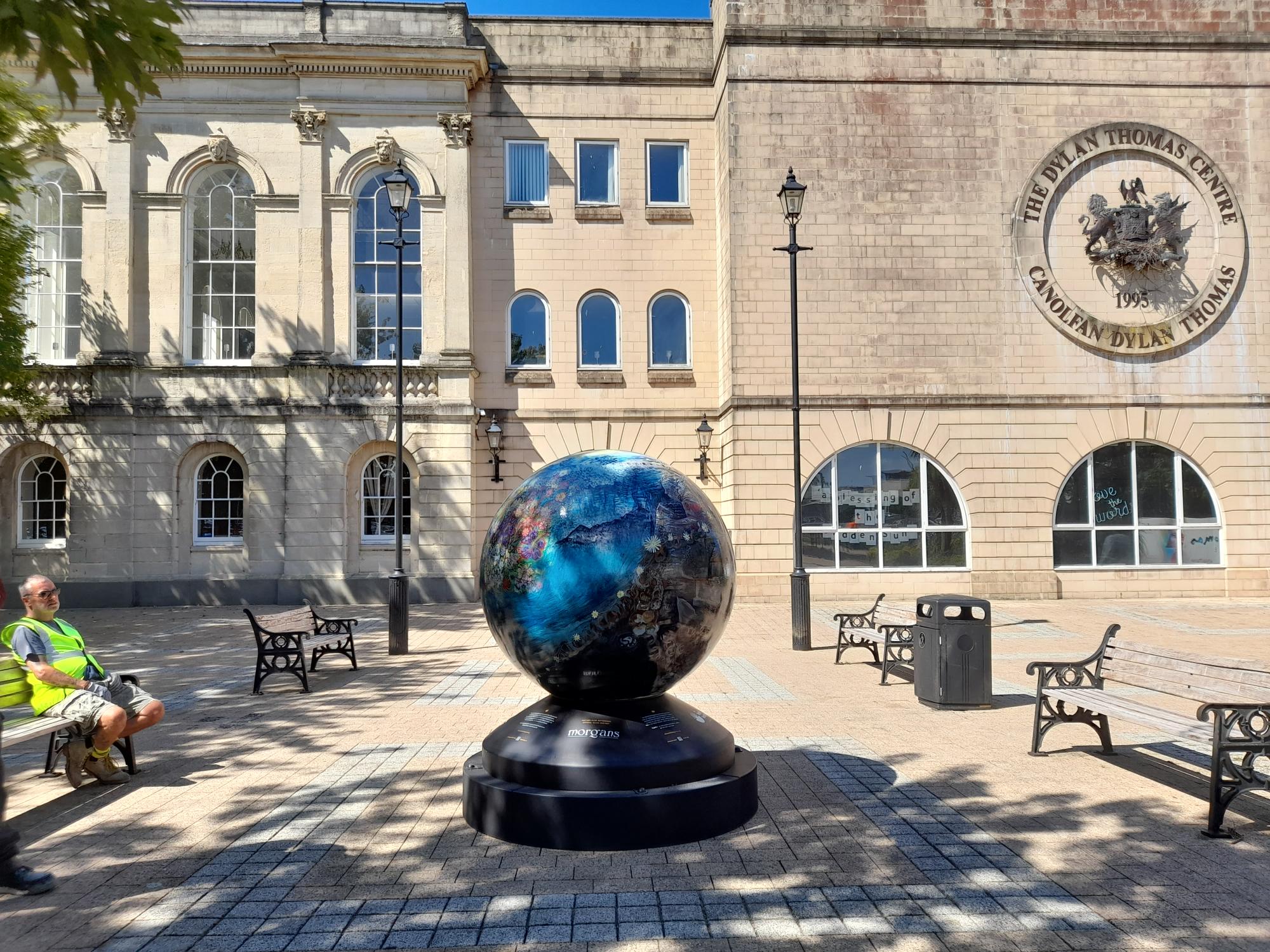 A new thought-provoking public art trail is appearing in Swansea from today (9 August).

Ten artist-designed globe sculptures are being installed in streets and other locations across the city centre. Local school pupils have created others that are also set to be on show.

The globes – nearly six feet tall – explore our shared history and how it has been shaped by the complex relationship we have with Africa and the Caribbean. They aim to transform how we understand the Transatlantic Trade in Enslaved Africans, its impact on all of us and how we can make racial justice a reality.

From today until the end of October, the fibreglass globes will be on show as part of a UK-wide project called The World Reimagined, supported by official presenting partner SKY and by Swansea Council.

Each globe has a different theme and has QR codes that, when scanned, can access a treasure trove of stories from our local and national history plus information from the artist who created the installation.

A Swansea local community launch is due to take place tomorrow Wednesday (10 Aug) at the National Waterfront Museum from noon-4pm. Other events are planned to follow over the coming months.

In Swansea, city centre visitors will be able to see the globes as soon as they have been installed this week.

Council cabinet member Elliott King said: “Swansea’s a diverse city, with more than 100 languages spoken here. We’re proud to be an open and welcoming community with City of Sanctuary status.

“We believe The World Reimagined will strengthen our communities’ connections with each other, encouraging people to think in fresh and positive ways about our past, present and future.

“We were determined to play a full part in this powerful project – it vibrantly reflects the council’s own approach to equality and the Arts.

“Creativity across Culture is a force for unity and, like others across Swansea and the World, we strengthened our commitment to racial equality in response to Black Lives Matter.

“We aim to serve and echo our communities fairly and positively; our Arts and Cultural activities reflect this.

“We signed up to The World Reimagined as a direct result of that commitment.”

Globe locations include Swansea Castle, the Quadrant shopping centre and the top of Princess Way.

One globe has been created by Wales-based artist Kyle Legall in collaboration with local communities. Schools have also got involved, with a number of globes being featured on the trail created by pupils who’ve taken part in The World Reimagined learning programme. They can be found in the National Waterfront Museum, the Grand Theatre and the Glynn Vivian Art Gallery.

Via a digital platform, people will be able to plan their enjoyment of the trail from this Saturday (13 Aug) when the full trail details will be released.

The trail will shine a bold new light on Swansea, along with its programme of events for all ages, running from August 13 to October 31.

It will bring people together to exchange experiences, creativity, stories and ideas on some of the biggest questions for our future.

The Swansea trail takes place at the same time as trails in six other UK locations.

Swans gift for people living with dementia at Cefn Coed