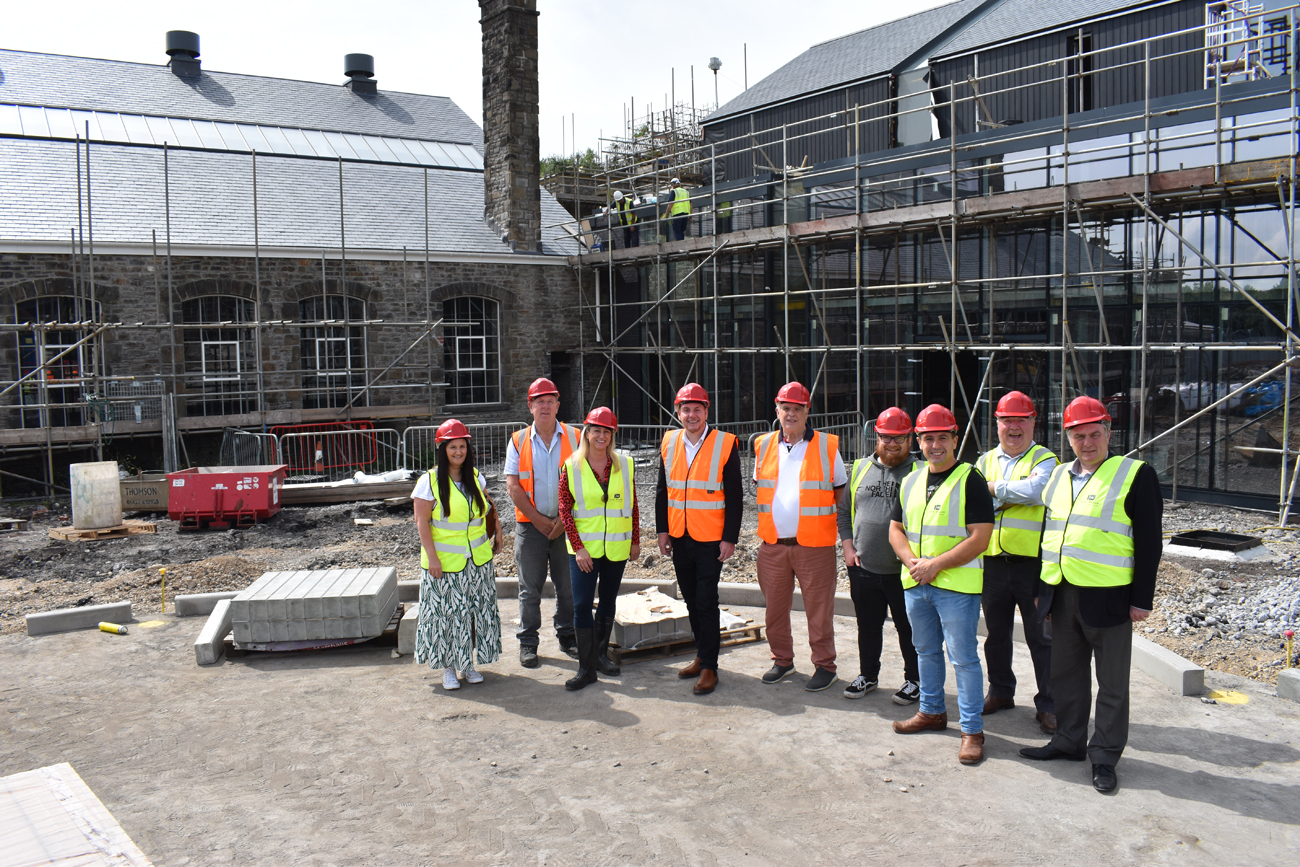 Some of Swansea’s most senior politicians have toured a regeneration scheme set to be a new attraction for a leading Welsh business.

Swansea Council’s regeneration of the Hafod-Morfa Copperworks is well underway and will soon be handed over to drinks specialists Penderyn.

The site is being revamped by Swansea firm John Weaver Contractors on behalf of Swansea Council.

Cabinet member Robert Francis-Davies said: “It’s wonderful to see the roof almost finished on the remarkable powerhouse – it shows that significant progress is being made.

“This initiative is going to be a big boost for our work on regenerating this part of the Lower Swansea Valley.

“Much of the scaffolding around the iconic powerhouse building is gone so the scheme is clearly taking shape.

Cabinet member Elliott King said: “Other parts of the Lower Swansea Valley were, only 60 years ago, a post-industrial wasteland. They’re now full of business, shopping and leisure opportunities for Swansea people – Penderyn will add to that.

“One of the distillery project’s main new features – a walkway between the Penderyn visitor centre and their barrel store – is well advanced and it’s good to see some of the external landscaping being crafted.

“We plan other attractions in the Lower Swansea Valle Area, including the Skyline adrenalin-fuelled visitor attraction, so these are exciting times.”

Work continues on the Hafod-Morfa Copperworks site that’s due to become a new visitor attraction for Penderyn Whisky next year.

The council scheme will bring new life to the historic site’s powerhouse and outbuildings. An on-site distillery will add to the company’s existing facilities.

The work has been made possible thanks to a £3.75m grant from The National Lottery Heritage Fund in Wales.

Council leader Rob Stewart said: “We’re protecting our heritage for future generations and it’s great to see the restoration of this historic copperworks site leading the regeneration of the lower River Tawe corridor.

“Nearby heritage sites also being saved include two copperworks engine houses, the Palace Theatre building and the Albert Hall.”

Construction at the copperworks began in summer 2020. The council aims to hand over the site for Penderyn’s fit-out this year. The scheme is part of the city’s £1bn regeneration programme that will help see Swansea grow.

The Lower Swansea Valley became the world leading centre for copper smelting in the 18th century. The Hafod-Morfa Copperworks site is of international importance, becoming the world’s largest copperworks in the latter part of the 19th century and early 20th century.

The council secured the National Lottery Heritage Fund grant for the expansive Hafod-Morfa site’s transformation work, with additional works to other historical buildings in the vicinity supported by Welsh Government Regeneration funding.