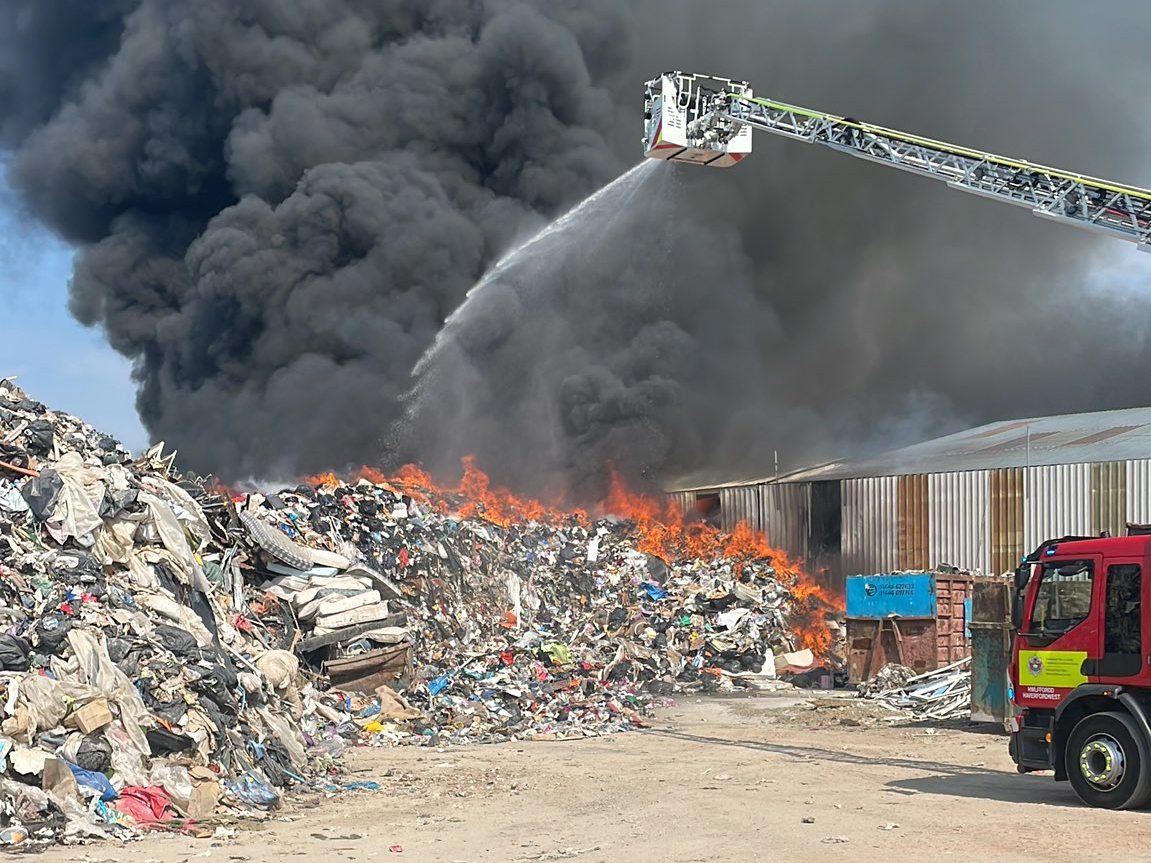 More than 100 firefighters have been tacking a massive fire at an industrial park in Waterston, where an industrial unit has been destroyed and an adjacent recycling facility set alight.

The fire, which started around 2pm on Sunday (August 14) is still alight, with fire crews working to extinguish the fire at both locations and mitigate further spread.

On Sunday, significant smoke was billowing from the scene of the fire, and residents in the Johnston, Milford Haven, Pembroke Dock, and Neyland areas as well as the other side of the estuary were advised to keep windows and doors closed, and remain indoors until further notice.

Fire crews from 20 separate stations were called to the incident from as far afield as Swansea, Ceredigion, Carmarthenshire and Powys.

The fire service confirmed that the fire was at a “Waste Recycling building, which also spread to adjacent field and 3 out buildings.

“Turntable ladder, 4 ground monitors and a number of Hose Reel Jets were in uses. Natural Resource Wales also in attendance.

The fire service added that the incident was still ongoing.

A Public Health Wales spokesperson said: “Motorists who have to travel through the smoke should keep windows closed, turn off air conditioning and keep their air vents closed.

“Smoke can irritate air passages, skin and eyes, resulting in coughing and wheezing, breathlessness and chest pain, so individuals with pre-existing cardiovascular and respiratory conditions, such as asthma, should carry any necessary medication or inhalers with them at all times and seek medical advice if their symptoms worsen by contacting their GP or NHS 111.

“We are currently at heat health alert level 3 and it is important that you protect yourself from smoke, whilst also keeping cool. Further information on how to stay safe during periods of warm weather can be found on Public Health Wales website.

“When sheltering indoors, open windows that are on the opposite side to the plume/smoke when it is safe to do so and when the air feels cooler outside than inside to get air flowing through the home, for example, at night. Once the smoke has moved away, consider opening doors and windows to allow properties to cool down, being mindful of changing conditions and that the smoke could return.”

Mid and West Wales Fire and Rescue Service reported they had approximately 100 staff on scene, with 14 appliances, specialist assets including a drone to provide situational awareness and tactical officers tackling the blaze.

Senior fire officers on scene were liaising with Natural Resources Wales, Welsh Ambulance Service Trust, Dyfed-Powys Police, Pembrokeshire County Council and local contractors to establish a plan to extinguish the fire in the next few days.

Dyfed Powys Police report that no one has been injured, and no adverse effects have been reported in the area at this time. There are no particular concerns for any nearby dwellings and therefore no evacuations are being considered at this time.

The police add that the B4325 road is closed, and people are being asked to avoid the area and take an alternative route.

Chief Fire Officer Roger Thomas, who attended the scene said: “Crews have worked extremely hard tackling the fire in hot and challenging conditions, to mitigate against the effects to the environment and from a public health perspective.

“Crews are also attending a large grass fire in Newgale, meaning approximately 20 appliances have been in attendance in the area tackling fires. This has placed a great deal of strain on our local resources.”