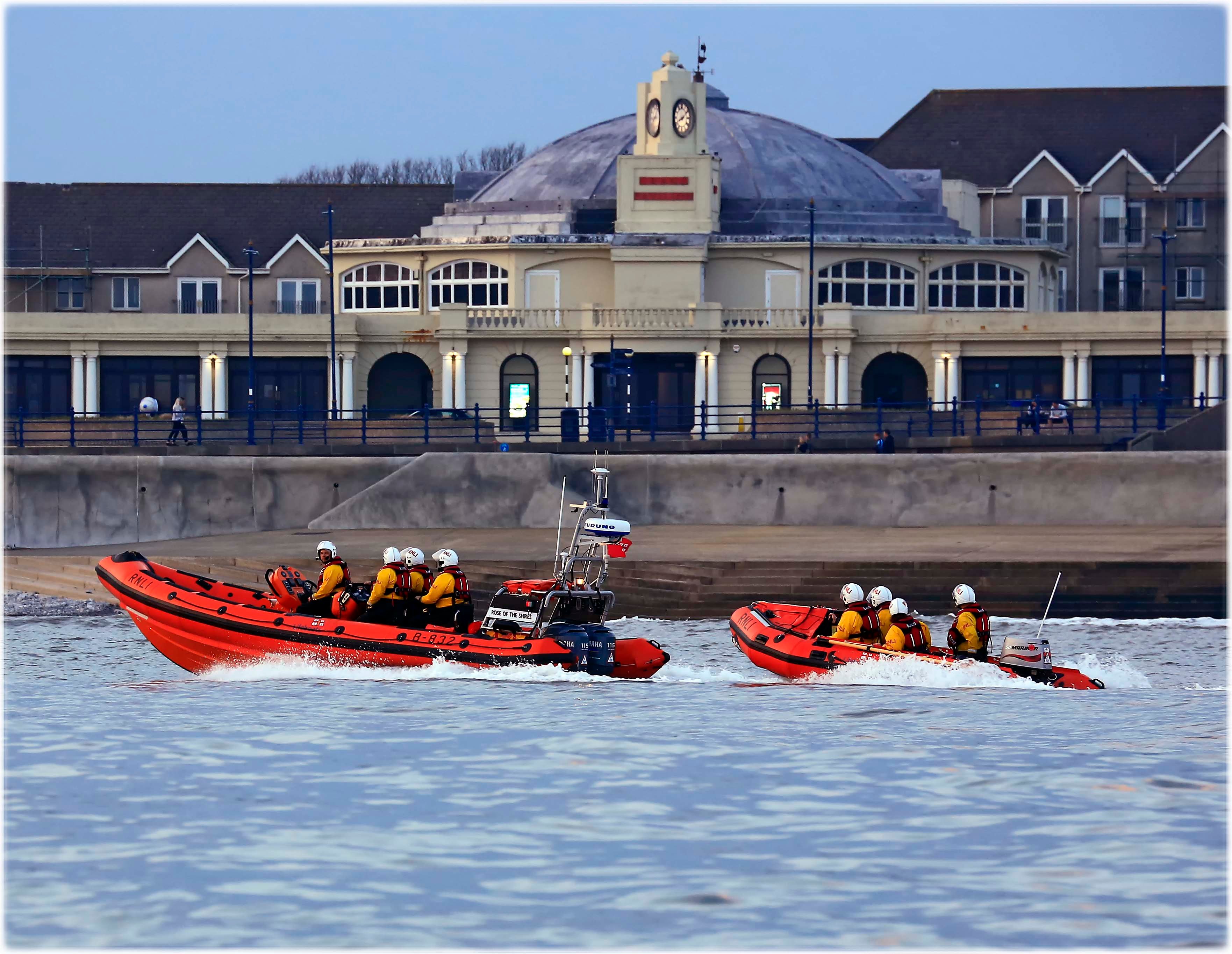 Porthcawl RNLI’s volunteer crew have responded to multiple incidents in the last two days involving both people attempting to cross the river at Ogmore and paddleboarders in difficulty.

The charity’s two inshore lifeboats, Atlantic 85 Rose of the Shires and D Class Hugo Missen, which are based at Porthcawl were launched on Thursday evening (11 August). They were called to assist around 70 people who got trapped on the Porthcawl side of the Ogmore river, as well as being tasked to paddleboarders in difficulty.

Those helped at the Ogmore river mouth had crossed the river earlier in the day when the tide was out and had not realised they would get trapped on the Porthcawl side by the tide later on in the day.

Simon Emms, volunteer helm at Porthcawl RNLI said: “HM Coastguard tasked Porthcawl RNLI’s volunteer crew to the Ogmore River yesterday evening as a safety intervention. There is real concern that someone will attempt to cross the river and due to the fast flowing currents, get swept out to sea.

“The teams from Porthcawl Coastguard and Llantwit Major Coastguard also responded to assist on either side of the river and provide safety advice. It is really important people check the tide times daily to ensure they don’t get cut off and trapped by the incoming tide.”

The incidents at Ogmore River and those involving paddleboarders on Thursday replicate the incidents Porthcawl RNLI attended on Wednesday evening, when over 30 people were assisted at the Ogmore River mouth and three people in difficulty with a paddleboard were rescued.

The increase in the popularity of Stand Up Paddleboards (SUP) has led the charity to issue a reminder about how to carry out this activity safely.

The warn that before venturing on the water, it is important to wear a Personal Floatation Device and ensure an appropriate leash is worn.

The RNLI recommends always checking the weather and tides before partaking in the activity and avoid paddling out in offshore winds. Visit a lifeguarded beach during patrol hours. Before heading out on to the water, the RNLI advises taking a mobile phone in a waterproof pouch and calling the Coastguard on 999 in an emergency.

RNLI warn that around Porthcawl and the Vale of Glamorgan Coastline the tidal range is the second largest in the world. With the recent spell of good weather the sea may look calm but as a result of the tidal range and the spring tides we currently have, there are very fast flowing tidal currents which can easily sweep you out to sea.

Chris Cousens, RNLI Water Safety Lead for the RNLI in Wales said: “We’ve seen an increase in call outs to Stand Up Paddleboards throughout the RNLI and hope people take heed of our vital advice which will ensure they can enjoy this activity as safely as possible.

“With another heatwave forecast for this weekend, we want to remind everyone to stay safe when visiting the Welsh coast. With so many people enjoying the water this summer, it’s important that we all know the risks. The sea can be unpredictable, and even with the temperatures soaring, the fact is that the water is still cold.

“The sea temperature around the UK and Ireland rarely gets above 15 degrees, and the risk of cold water shock significantly increases as air temperatures rise.

“If you get into trouble in the water, Float to Live. Lean back, using your arms and legs to stay afloat. Control your breathing, then call for help or swim to safety. In a coastal emergency, call 999 or 112 for the Coastguard.”