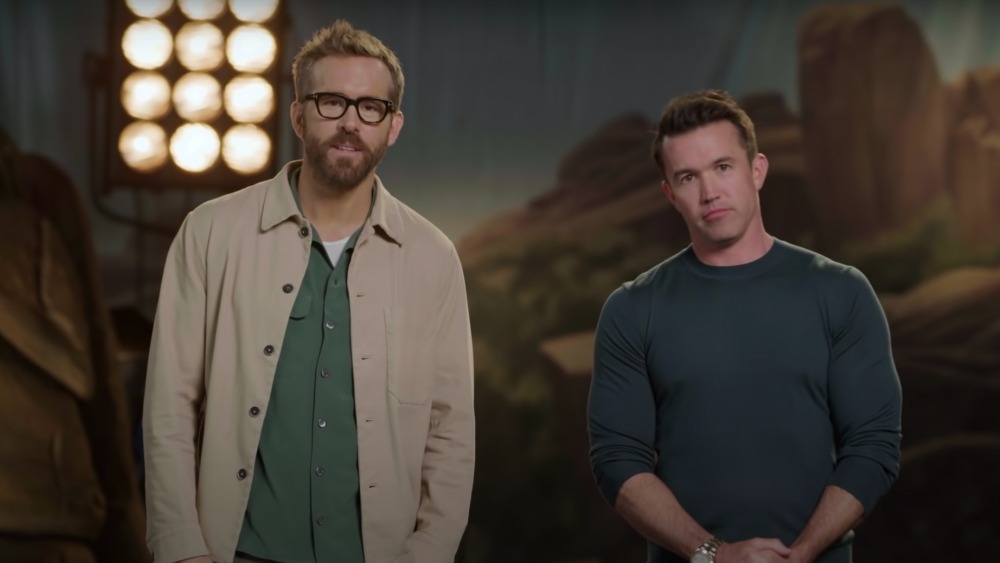 The documentary, complete with Welsh translation, is released on Disney+ in the UK on Thursday, August 25th.

To celebrate the occasion we’ve teamed up with LiveScore Bet to take a look at which other famous Hollywood duos could join forces to purchase their very own Welsh Football Club.

Not only that, we’ve worked out exactly what percentage of their net worth would be required to pick up this most surreal of status symbols.

Forget a Super Yacht, the real Hollywood elite should be looking to find themselves the proud owners of Porthmadog F.C.

An Iconic rom-com double-act, who can forget that front door scene in Notting Hill?

Could Denbighshire’s own Rhys Ifans, pair up with former co-star Hugh Grant to purchase Ruthin?

Ifans, also known for his role as Eye Ball Paul in Kevin and Perry go large, has dug deep to protect Welsh heritage before.  Back in 2017, he supported the community purchase of Welsh pub Tafarn Sinc, when it was facing closure.

If he and England’s favourite leading man Hugh Grant joined forces they could easily find the spare cash to purchase Ruthin Town F.C.

The second division club have taken big strides off the pitch in recent years, installing flood lights for the first time in 2021, but would be able to take giant leaps into the limelight with Ifans and Grant’s backing.

Although born in Birkenhead, Golden Globe Award winner Taron Egerton moved to the Welsh island of Anglesey at the age of two, before settling in  Aberystwyth when he was 12 years old.

He is probably best known for his iconic biographic performances including Eddie the Eagle and most recently singer Elton John in the musical Rocketman.

Despite now living in West London there is no reason he couldn’t invest in his own football club back in Wales.

If you’re going to buy a football club, you want to do it with someone who knows how to turn a profit, and his former co-star Samuel L Jackson is the highest-grossing living actor of all time.

Aside from being one of LA’s most well-known and prolific actors, Samuel L Jackson is no stranger to British football. The actor has supported  Liverpool F.C since filming the comedy 51st state which was shot in the city back in 2001.

Aberystwyth FC became the first club to play 1,000 top flight games in Wales back in February.

The seasiders always rely on great crowds, and while the towns North and South Beaches aren’t quite Venice beach, it still has that laid-back California vibe.

Tom Jones and Will I am: Pontypridd United A.F.C

Not a movie star but arguably Wales’ most famous export Tom Jones has made a fair bit of money over the years.

The Pontypridd sex bomb may have left Wales for Los Angeles many, many years ago but he has never forgotten his roots. The crooner apparently has a Pontrypirdd telephone box installed in his L.A mansion to remind him of home. Why not go one further and buy the local football club?

We’ve no doubt Jones could afford this on his own, but at his time of life it makes sense to share the venture with a trusted partner and who better than his The Voice co-presenter Will I Am.

The Black Eyed Peas rapper, as well as being an accomplished musician, clearly enjoys taking part in multiple business ventures, including designing smart watches for the German market. Welsh football seems like an obvious next step.

Pontypridd could do with a helping hand as they embark on their first season in Wales’ top flight and perhaps the town’s most famous son is the right man for the job.

Born in Newport to a secretary and a steelworker, Michael Sheen went on to have a glittering career on stage and screen.

He also likely picked up a fair bit of knowledge about the beautiful game when playing former Nottingham Forest Manager Brian Clough in The Damned United.

An Honorary Fellow of the University of Wales, these days he dedicates himself to his charity work, but maybe if he had a word with Frost/Nixon co-star Kevin Bacon, they could find themselves owning Newport County A.F.C.

Who knows, with Bacon’s connections, they could even get EE lined up as a potential shirt sponsor?

This could be considered one of the more likely of potential takeovers- Newport, like Wrexham, play in the English football system and are currently a division higher than the Dragons.

They knocked Championship side Luton Town out of this year’s EFL Cup and will face Salford City, a club co-owned by some of Manchester United’s biggest stars, this season.

After launching a Hollywood career playing serial Killer Patrick Bateman in American Psycho, Bale has gone on to star in blockbuster after blockbuster playing everyone from Batman to US Vice President Dick Cheney.

Maybe he should celebrate his role as Gorr in Marvel’s latest release Thor: Love and Thunder with his very own football team?

In the latest Marvel epic, he stars opposite Chris Hemsworth as Thor and by pairing up with the Australian- now one of the world’s highest-paid actors they could purchase Haverfordwest County quite easily.

The Bluebirds have been one of the mainstays of the Cymru Premier, suffering relegation to the second division in 2016 but bouncing back in 2020.

With Bale’s backing, could they get in touch with his namesake once he’s finished playing in LA and make a push for their first-ever top-flight title?

One of the most expensive Welsh clubs, whichever screen stars want to buy Swansea would need to find more than a bit of spare change.

Who better though than Catherine Zeta-Jones, daughter of a sweet factory owner turned Hollywood leading lady?

She could partner up with Antonio Banderas, her co-star from her break-out 1998 movie Mask of Zorro, to bid for her childhood football team.

Despite being a lifelong Malaga FC man, the Spanish actor is known for being a shrewd businessman owning 50% of a winery in Villalba de Duero, Burgos, Spain. Maybe it is time to diversify his portfolio with 50% of a Welsh football club?

Swansea, alongside Cardiff, are unquestionably the biggest team in Wales and are looking to get back to their Premier League heyday.

In those times they could call on a strong Spanish connection with stars like Pablo Henandez, Michu and Angel Rangel tearing the Premier League up, so maybe the secret to success is to get Senor Banderas on board.