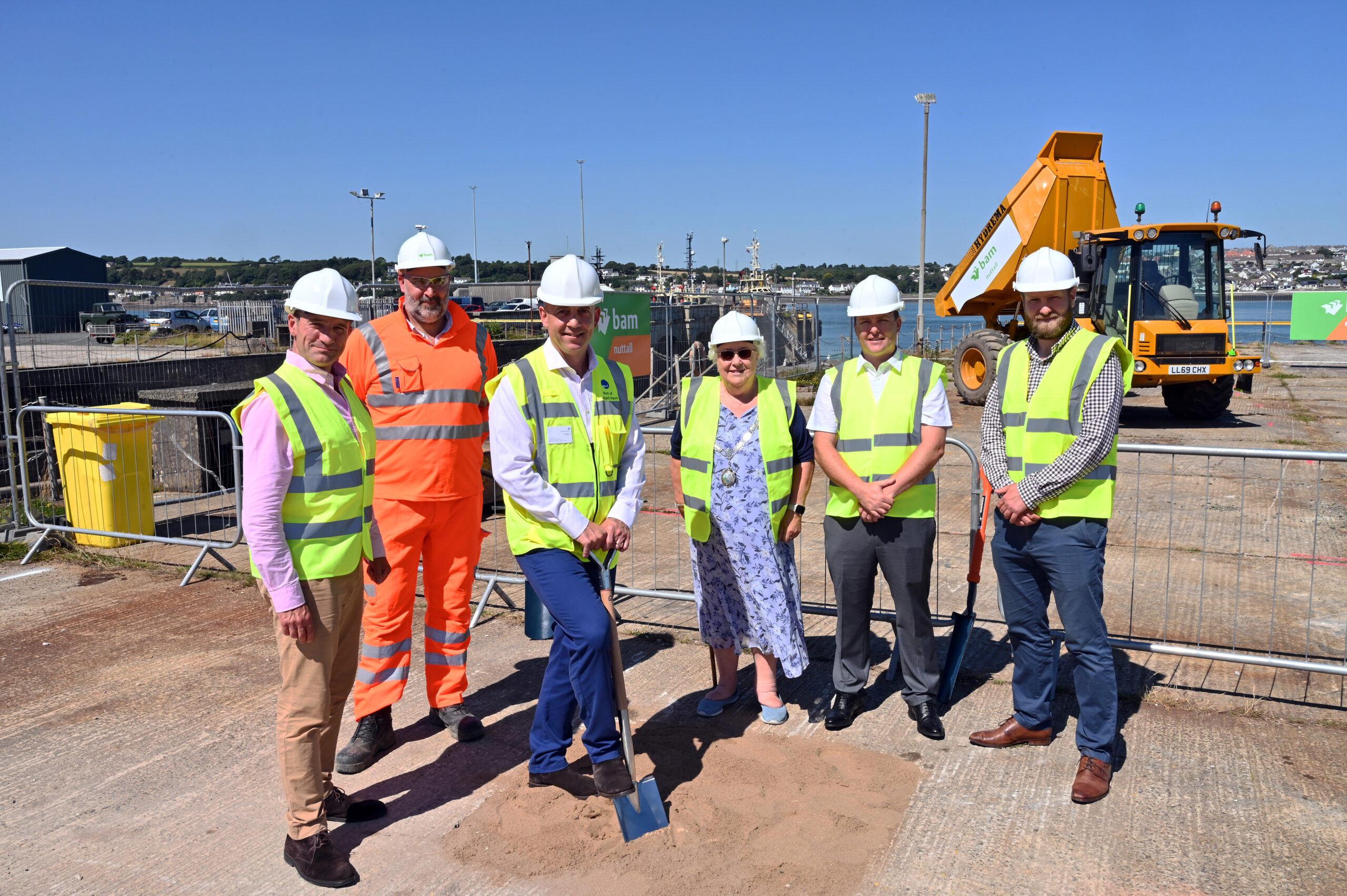 The construction of a new supersize slipway and new workboat pontoons is now underway at Pembroke Port.

The Port of Milford Haven say it marks a big step forward in the realisation of its vision for the Milford Haven Waterway to play a vital role in driving new green growth across the region, while supporting the country’s transition to a net zero future.

The new slipway will provide maximum flexibility for the launch and recovery of marine energy devices and vessels, while the pontoons will strengthen the Port’s operations and maintenance proposition for the floating offshore wind (FLOW) industry.

Commercial Director at the Port of Milford Haven, Steve Edwards, said: “It’s fantastic to see this development underway at Pembroke Port. The new upgraded spaces and facilities will be perfect for the growing low carbon industry around the Celtic Sea as well as the supply chain companies that will benefit from the opportunities created here.

“We’re looking forward to seeing huge changes over the next eighteen months, working with industry and academia to maximise local and regional benefits.”

The works sit alongside the renovation of the Annexes attached to the Sunderland Hangars. These are now midway through construction and will create new office and workshop spaces for industry. Later phases of the project will focus on creating large scale laydown spaces for device fabrication and development.

This collaborative platform has already attracted companies from across the globe who are spearheading new research, development, and manufacturing in marine energy power generation, with an appetite to do much more. The Offshore Renewable Energy Catapult, the UK’s leading technology, innovation and research centre for renewable offshore energy, has also demonstrated its confidence in the area’s potential with the development of a multi-million pound Marine Energy Engineering Centre of Excellence based at Pembroke Dock.

Cllr Paul Miller, Pembrokeshire County Council Deputy Leader and Cabinet Member for Place, the Region and Climate Change, said: “The Haven Waterway is inextricably linked to the health of the Pembrokeshire economy. We need to invest in the waterway in order to sustain employment but also to ensure it remains the UKs leading energy port.

“Up to 30% of the UK’s gas today, but also Green/Blue Hydrogen and Floating Wind Generated electricity tomorrow.

Cllr Rob Stewart, Chairman of the Swansea Bay City Deal’s Joint Committee said: “The City Deal is making significant progress in its ambition to grow the economy and create employment opportunities in Pembrokeshire and across the region, with a focus on the energy sector and renewable technologies.

“We welcome BAM Nuttall onboard to construct the workboat pontoons and slipway at Pembroke Port, which will help regenerate the port area and support the wider blue-green energy economy.

“This exciting development, coupled with the recent approval of the City Deal Skills & Talent pilot project which will deliver essential skills in the renewable energy sector demonstrates that we are focused on lowering carbon emissions, supporting floating offshore wind and growing our young talent to support this sector.”

Civil engineering firm BAM Nuttall has been appointed to construct the new slipway and workboat pontoons.

Ian Hubbard, BAM Regional Director for Southern England and Wales, said: “The Port of Milford Haven has a vision for the regeneration of Pembroke Dock and BAM is delighted to play a role in that.

“The Port is ideally suited for servicing wave, tidal and wind power and this latest investment will help to improve the facilities on offer to the growing offshore renewables industry.

“BAM will be employing a mixture of local and specialist labour to deliver its works, so this contract will create jobs in the Pembrokeshire area as well as helping to modernise the port facilities.”

Lead image: Representatives from across the region came together to celebrate the start of the construction of a new supersize slipway at Pembroke Port which will provide maximum flexibility for the launch and recovery of marine energy devices and vessels. (Image: Port of Milford Haven)

New Haverfordwest school handed over ahead of schedule