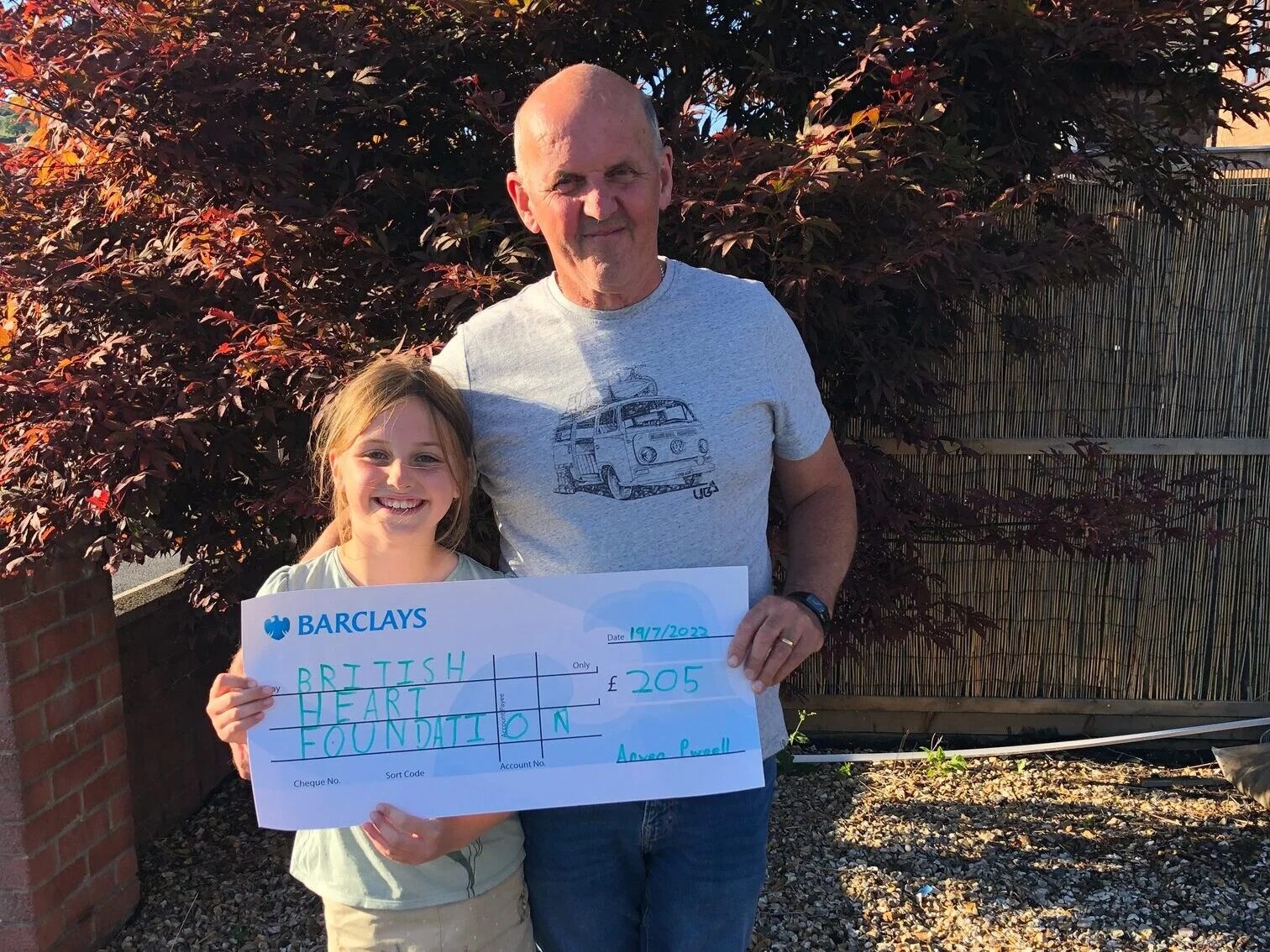 BHF Cymru has thanked 9-year-old Anwen Purnell from Nantgaredig in Carmarthenshire, for fundraising in support of the charity’s lifesaving research.

Anwen took part in a 5k challenge, raising £205 for the British Heart Foundation because her much loved grandfather, her Tadcu, Lyn Rowlands had stents fitted in 2020, and she wanted to help other people with heart conditions.

Lyn recently celebrated his 68th birthday. Anwen’s Mamgu, Lyn’s wife Jane Rowlands says: “We are very proud of Anwen that she’s shown so much love towards her Tadcu and choosing to fundraise in support of British Heart Foundation following his heart operation. Anwen and her sister, Carys are very much loved by us both.”

After deciding to support the charity earlier this year, Anwen visited the BHF Cymru Carmarthen Home Store with her mum Emma-Jane to learn some fundraising tips and returned to present a cheque to store manager Linda Ryan.

Emma-Jane says the BHF team were really helpful, with Linda, her staff and volunteers being very supportive of the young fundraiser and even sponsoring her themselves.

Linda says: “We were thrilled that Anwen came to the store to talk to us about her wish to support the BHF, she’s such an inspirational little girl, we were delighted to give her some advice on how best to raise money to help fund our lifesaving research.”

The good news doesn’t stop there. Big-hearted Anwen has gained her Girlguiding Brownie “Charities” badge as a result of her fundraising. The 5k challenge Anwen took part in was held at her school, and on top of the £205 she raised for the BHF, she collected another £300 which will be split between her school’s sensory unit fund and Noah’s Ark Children’s Hospital Charity.

Anwen’s dad Gary says: “We are beyond proud of what Anwen has achieved. We initially set a target of £100, this then increased to £100 per charity, but we were overwhelmed by the support of our local community raising a final total of £505.”

Emma-Jane adds: “Anwen did amazingly well running the 5k with her school friends and her friend’s mum who helped with the training! Diolch o galon i bawb am eich cymorth a da iawn mawr i ti Anwen. Ti werth y byd.”

In Wales 340,000 people are living with heart and circulatory conditions. Head of BHF Cymru Rhodri Thomas says: “We are so grateful to Anwen and her wonderful family and friends for supporting BHF Cymru. In the last 5 years [2017-2021], BHF has funded £9.5m worth of research in Wales, supporting the work of 64 researcher staff. None of this would be possible without the amazing contribution of our wonderful fundraisers and volunteers.”