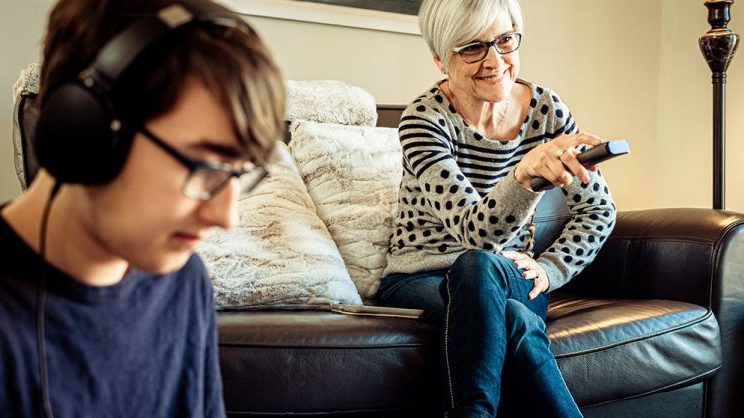 Younger adults in Wales now watch almost five times less scheduled TV than those aged 55 and over, new data from Ofcom has found, as the generation gap in media habits reaches a record high.

According to Ofcom’s latest Media Nations report for Wales, people aged 16-24 in Wales spend an hour and six minutes in front of broadcast TV in an average day – five times less broadcast TV than those 55+, who still spend nearly half of their waking day enjoying broadcast TV for almost six hours (333 minutes) daily.

Three streaming giants in a fifth of UK homes

Around a fifth of homes in the UK (5.2 million) subscribe to all three of the most popular platforms – Netflix, Amazon Prime Video and Disney+ – costing around £300 per year. 70% of households in Wales subscribe to at least one of them, up from 64% in 2021.

Almost nine in ten 18-24-year-old adults bypass TV channels and head straight to streaming, on-demand and social video services when looking for something to watch, with Netflix the most common destination.

Broadcasters’ on-demand services had a similar level of reach to other streaming platforms, with most consumers using multiple streaming services. BBC iPlayer was the most popular on-demand service in Wales, used by 77% of online adults and teens.

Social video platforms are also competing for viewing time and are particularly popular among younger age groups. Internet users in Wales aged 15+ spent on average 34 minutes per day on TikTok, the most of any nation, and 39 minutes per day on Facebook and Messenger in March 2022.

Eleanor Marks, Ofcom’s Director for Wales said: “The streaming revolution is stretching the TV generation gap, creating a stark divide in the viewing habits of younger and older people.”

“Traditional broadcasters face tough competition, which they’ve partly meeting through the popularity of their own on-demand player apps. Combined viewing to the main 5 PSB channels continues to account for more than half of broadcast TV viewing in Wales.”

The average amount of time people in Wales spent watching TV and video content in 2021, across all devices, was 4 hours 33 minutes per person per day, down 33 minutes on 2020, which was more heavily influenced by Covid-19 restrictions, but up on 2019.

Time spent watching TV from broadcasters in Wales fell by 12.6% compared to 2020, the largest proportional decrease of any UK nation, supporting the long-term decline in overall viewing of broadcasters’ content, seen over the past decade. However, people in Wales spent 3 hours 8 minutes per day watching broadcast TV on the TV set in 2021, more than the UK average.

In 2021, the main five PSB channels accounted for a combined 54.9% share of the total broadcast TV audience in Wales, up from 53.6% in 2020. While seven in ten Welsh viewers are satisfied with public service broadcasters (PSBs), audiences and levels of viewing continue to fall, particularly for young people.

However, there is better news for their on-demand ‘player’ apps. Overall, 82% of people said they used a PSB on-demand service in the past six months, roughly the same proportion who said they used at least one streaming service (83%). Six in ten (59%) viewers said they used these platforms to watch channels or programmes live at the time they are broadcast.

As a result, the average time spent watching services such as BBC iPlayer, ITV Hub, S4C Clic and All 4 increased to 15 minutes in the last year, up by three minutes per person per day, bucking the trend of post-pandemic declines in viewing time.

Trusted and accurate news is considered by audiences in Wales to be the most important attribute of PSB, followed by ‘a wide range of different types of programmes’ and ‘programmes that help me understand what is going on in the world today’.

In 2021 nine in ten adults listened to the radio in Wales for an average of 22 hours each week, with BBC network radio stations continuing to have the largest market share.

Online radio listening continues to be popular, but smart speakers do not seem to have made the same impact in Wales as they have across the UK with just 4% of overall listening in Wales, compared to 10% in the UK. This is despite people in Wales being more likely than the average for households across the UK to have a smart speaker in their home (45% vs 39%).

Listening to live radio on a radio set was higher for adults in Wales, at 74% of adults compared to 65% of adults in Great Britain. In contrast, weekly reach of music streaming and online radio was lower than the GB average.

It Starts In School: Community backs campaign to help Pembrokeshire children get back in the classroom

As Ryan Reynolds and Rob McElhenny’s Welcome to Wrexham comes to Disney+ could Catherine Zeta Jones buy Swansea City next?