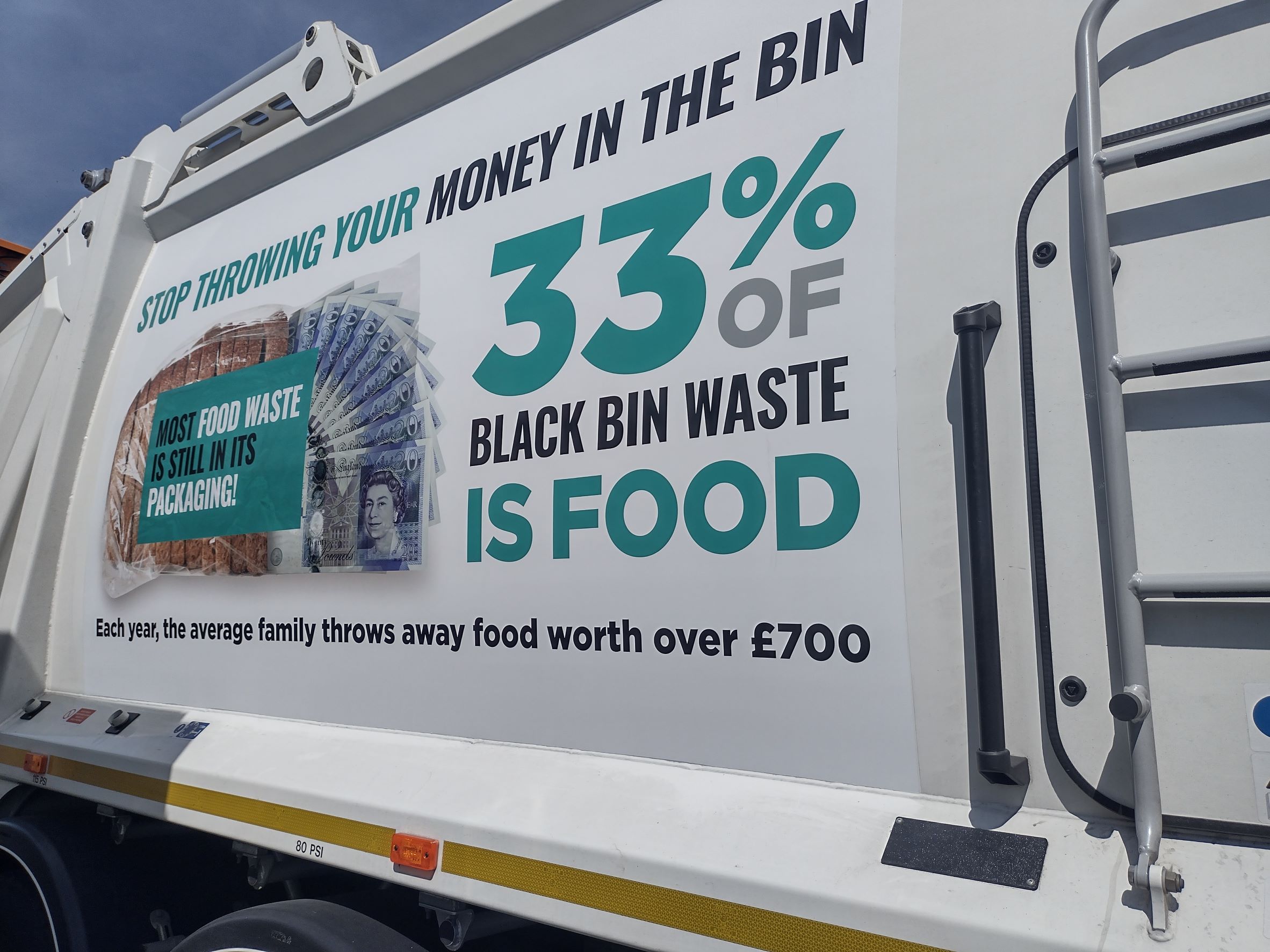 Neath Port Talbot Council has covered its bin lorries in huge adverts urging residents to cut food waste – something the council describes as ‘throwing money in the bin’.

The council is urging residents to use their weekly food waste collection service to recycle any leftovers and wasted food with a series of unmissable messages on refuse lorries.

The campaign is using large sized wording and cartoons on the sides of refuse freighters to make it clear that 33% of black bin waste in Neath Port Talbot is food.

And of the 33% of food waste placed in black bins/bags instead of going for recycling the majority is still in its packaging!  So go on, next time that plastic wrapped half a cucumber or other fruit and veg has gone off, take the plunge for the planet, open it and put it in your food waste.  It’s a simple thing you can do help.  Even better, save yourself some cash and take some more time to plan meals and avoid over purchasing.

The additional cost to the council for disposing of the 33% of food waste in the black waste is more than £1 million per year.

Neath Port Talbot Council’s Cabinet Member for Streetscene, Cllr Scott Jones, said: “We want to thank those who recycle their food waste but to those who don’t we’re asking you to please get involved and play your part in recycling.

“There are huge environmental benefits in placing food waste in caddies so it is recycled instead of in black bin waste where it is not. Also it is clear a lot of money is being wasted because many are throwing away food before even unpacking it.

“Also, food waste is collected every week and there is no limit to the amount of food waste you can put out for collection or food waste bins residents can have. We in Neath Port Talbot currently have a 66% recycling rate however, if we are to achieve the statutory recycling target set by the Welsh Government for 2025 of 70% we need residents to recycle more, especially their food waste.”

Some of the lorry-side messages say: “Are you feeding the right bin?

Others highlight the fact that each year the average family throws away food worth more than £700 by suggesting: “Stop throwing your money in the bin!”

The items you can place in your food waste caddies are: Meat and fish – raw and cooked, including bones, fruit and vegetables – raw, cooked and peelings, dairy products e.g. cheese, bread, cakes and pastries, rice, pasta and beans, uneaten food from your plates and dishes, teabags, tea and coffee grounds, egg shells, out of date food.

Please do not include: Packaging of any sort, plastic bags, liquids, oil or liquid fat, newspaper or kitchen roll, food in packets (e.g. out of date items), animal waste of any sort.

The campaign comes after major supermarkets such as ASDA, Sainsbury’s and Morrisons scrap ‘best before’ dates from a raft of fresh produce in efforts to stop people from throwing away perfectly good food.

A recent report from WRAP reveals that removing date labels from the most wasted fresh produce items such as, broccoli, apples, potatoes and cucumber, has the potential to cut annual household food waste by 50,000 tonnes.