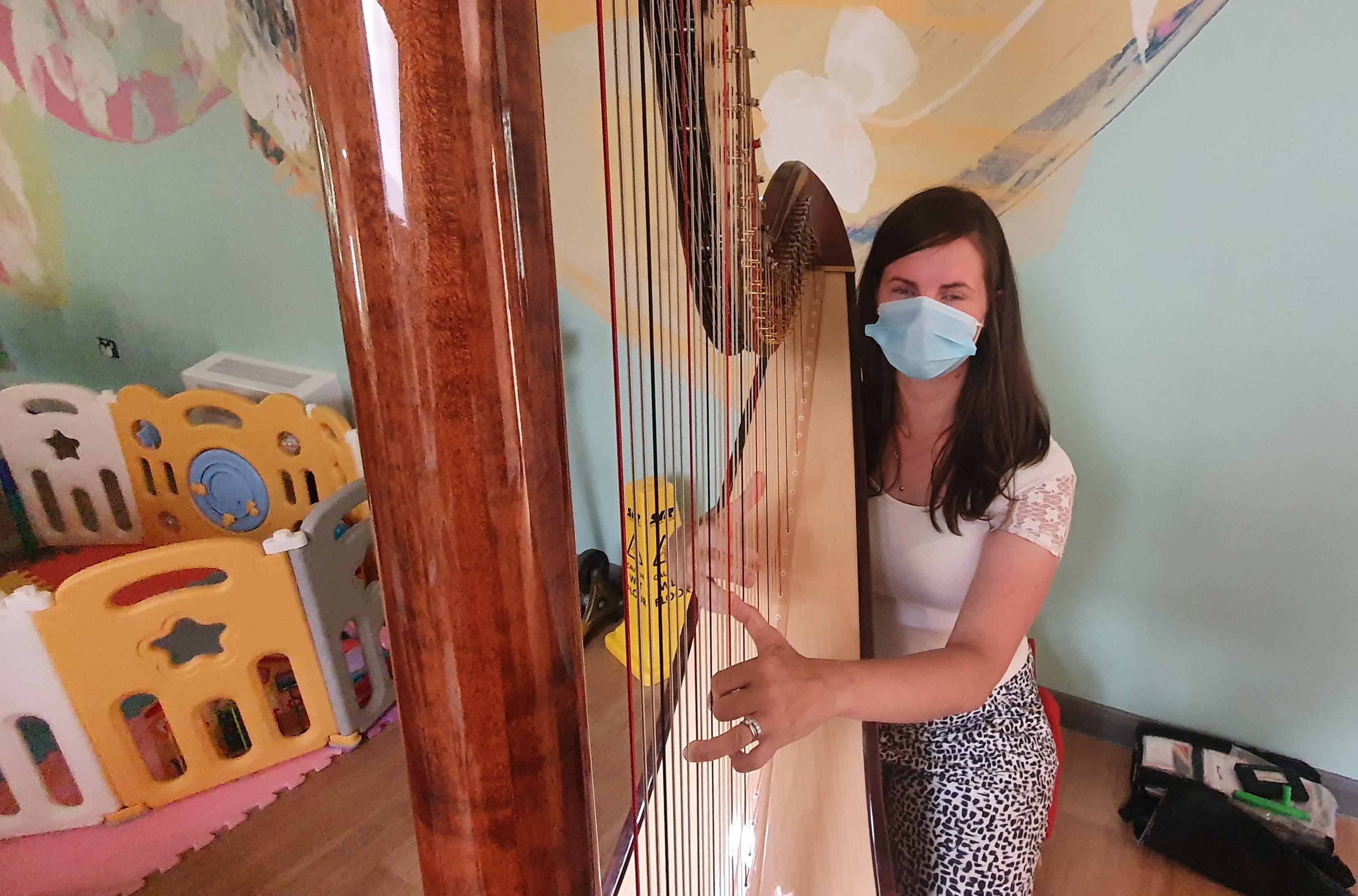 A new initiative in Swansea Bay, aimed at strengthening the bond between new mothers and their babies through music, really does pull on the harp strings.

Uned Gobaith (Unit of Hope), located in the grounds of Tonna Hospital in Neath, welcomes a harpist once a week to play for its mums and their babies.

The unit, which is able to care for new mums who experience a wide range of mental illness including postpartum psychosis, depression, anxiety and OCD, claims the sessions have a therapeutic effect, calming the babies and promoting the mums’ well-being.

Iori Haugen, Swansea Bay’s music and health facilitator, said: “We were approached by the Live Music Now organisation to run a project called the Lullaby Project to basically get mothers to write songs for their babies with the aim of performing them.

“We had three cohorts of eight families working together and most came from the Tonna Hospital unit. It was so popular, and so successful, that we decided to bring in a harpist to see what effect that would have on the well-being of the mothers and their babies in the unit.”

The harpist, Bethan Semmens (pictured top), arrived courtesy of Live Music Now, which was established in 1977 by violinist Sir Yehudi Menuhin to support young musicians and at the same time reach those in the community who had least opportunity to experience the joy and benefits of being involved in live performance.

Iori (pictured right) said: “We have Bethan come in and perform for us once a week. The marked difference in mental health is massive. We have babies who may be really agitated and cause a lot of stress for the mother as well, but when the harpist is in there the baby completely calms down, which obviously gives the mother a bit of respite as well.

“For a good while now it has been biologically proven that singing and music have a huge benefit on people’s well-being. For example people notice a marked difference in cortisone levels, which is stress hormone reducing. It has a real positive effect.”

Iori, whose colleagues are also working in primary care with the social prescribers to ensure GPs are able to consider prescribing singing, drama or dance instead of antidepressants, is keen to extend the practice.

He said: “My role, funded by the Arts Council of Wales, is to ensure that music is being used in the health board to boost the health and well-being of patients and staff.

“Besides Tonna, I’m working with Cefn Coed Hospital and ward F in Neath Port Talbot, as a pilot project where we’re providing musicians on the wards once a week, with the aim of then creating a service that we can roll out across the health board.

“We’re looking at several aims, does it reduce falls prevention, does it improve the well-being and mental health of patients and staff, and does it reduce the length of stay? Therefore, does it then save the NHS money?”

Bethan Semmens said: “I come along once a week to play for the mothers and babies but we like to get them involved in the sessions as much as possible. We want to help them bond with their child. For example, through singing to them. It’s a special moment and a good way of connecting with your child.

“Often we find that while you are playing the babies calm down immediately. They become calm and happy. It’s more difficult to tell with the mums because they must have a lot on their minds but some of them are very chatty and very appreciative. I’m sure they all are but some show it more than others. They always say ‘My child was calm after you left’ and things like that.

“As a musician it’s hugely rewarding; you can see the effects in front of your eyes.”

Another who recognises the value of the exercise is ward manager, Jenna Badman, who said: “We are always looking for different aspects to help them bond and a harpist definitely brings that to the unit once a week.

“The mums have also said how much they look forward to it – that is a really positive impact.

“You can definitely see the benefits within the mums, through how engaging they are with their babies during that time. It’s a nice relaxing atmosphere on the ward. The mums are able to engage with their babies in a stress-free manner.

“The babies are definitely smiling so I think something is going on. And there’s a nice atmosphere throughout the day following the sessions so it leaves a nice calming atmosphere.”

One mother said: “I always look forward to the harpist. It makes me really happy and I feel like going to sleep. My son also enjoys the visits.”