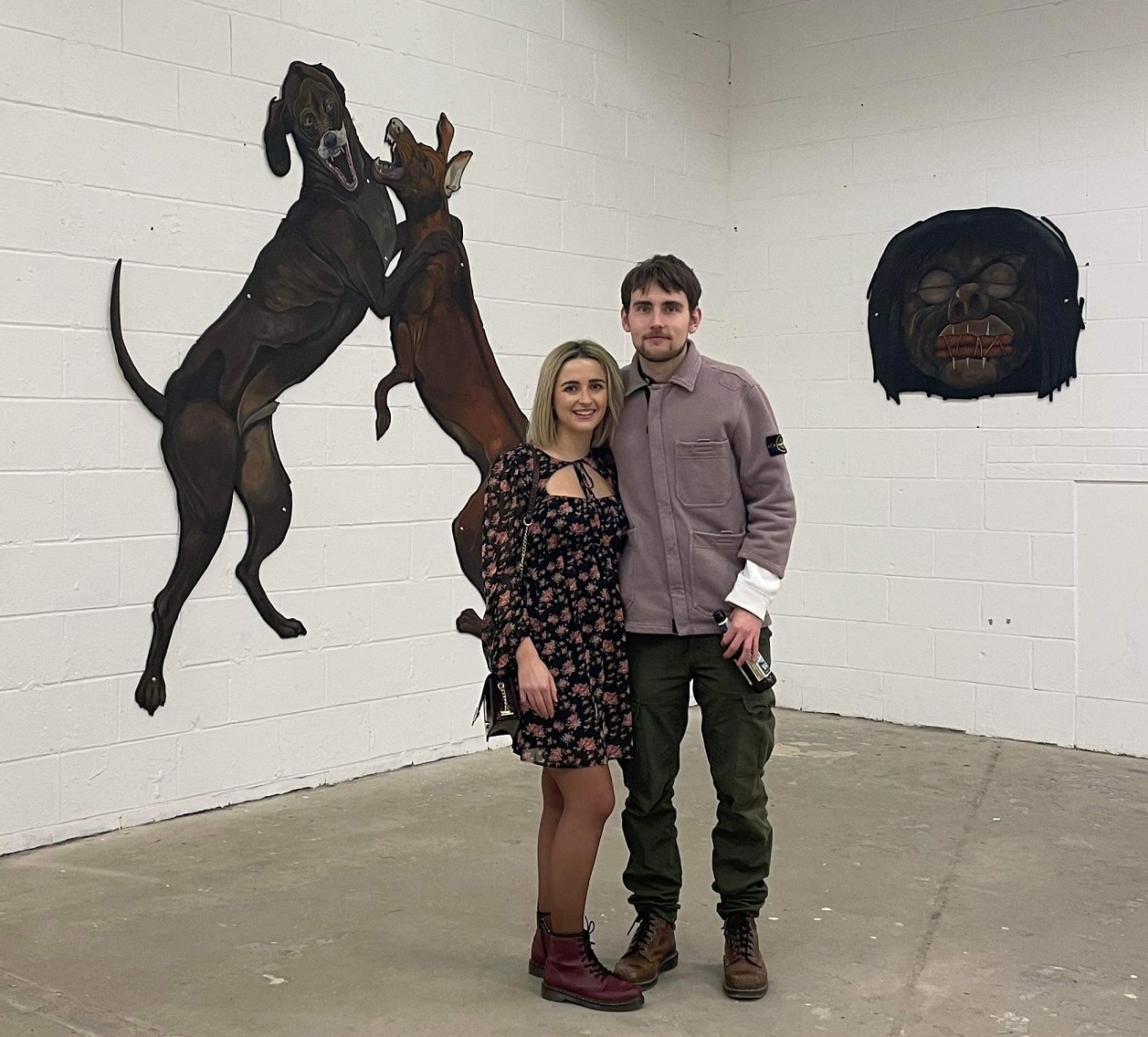 If support worker Jacob Taylor draws a picture for anyone he cares for, they would be well advised to keep it safe, as it could be worth quite a bit one day.

Although the 25-year-old is currently employed by Swansea Bay University Health Board, he is also a talented artist who has just enjoyed a sell-out Soho exhibition.

Jacob (pictured top with girlfriend Rosie Everett) is making waves in the art world after his show, From the Valleys to the Alleys, held at Laz Emporium in London’s Soho, was organised by the former agent of art phenomenon – Banksy.

If that wasn’t enough, all the works of art were sold before the doors even opened, having been snapped up within two hours of being previewed online.

Explaining his sudden appearance in the spotlight Jacob, who gained an illustration degree from Cardiff University, said: “I put a group exhibition together last March in Cardiff, and one of my favourite artists ever, Jake Chapman, asked if he could be part of the show.

“Then, through the networking around that, I got introduced to an art agent called Steve Lazarides, who owns the Laz Emporium gallery and used to represent Banksy.

“He just said to me, ‘Do you want a show?’ so I obviously snapped up the opportunity.

“We sent out invitations to the exhibition and we were bombarded with requests for pictures of the work, and it sold out, in under two hours, before the exhibition opened.

“In all I had ten pieces of art in the show, but I also sold a lot of my backlog of work as well.

“The artwork went for an average of £1,500 each. It felt like my dream was coming true. All of my hard graft over the years – grinding out my paintings and putting on exhibitions off my own back – had finally led to recognition.

“I had no intention of making money – I did it, genuinely, out of the love of my art.

“I know that some were bought for a couple of A-list celebrities but I’m not in a position to name them.”

Jacob describes his style as “semi-abstract surrealistic” and uses a mix of mediums – acrylic, oil and drawing.

He added: “I’ve always been into the darker, more controversial side of art but part of where my style has come from is when I worked in a tattoo parlour. I did an apprenticeship there alongside my university course.”

Of his current day job Jacob said: “I’ve been a support worker for around 18 months, and I’ve never done anything like it before. I had just started a new job in the BBC, in its art department, but then all filming stopped because of Covid, and I had to find something else.

“I support the service users to go about their day-to-day tasks and, generally, try to help them to have a better life in every way I possibly can.

“You do go home thinking, ‘I’ve helped people today’, which is rewarding.

“I do try to introduce some art into their lives where possible.”

As for the future, Jacob has several projects in mind, one of which could be truly lifechanging – becoming a dad for the first time.

He said: “We’ve got another exhibition planned for the end of the year and another couple for next year.

“And my girlfriend is expecting, so whatever happens in the future I would like to be financially secure.”

Louise Withey, learning disability manager, said: “Well done Jacob! We are all amazingly proud to have such a talented young man working with us.

“We know how hard he has worked towards this, which we appreciate hasn’t been easy trying to keep on top of his art in his free time.

“Despite his very busy schedule, Jacob still comes into work and gives 100% to our ladies, because as well as being talented, he is a kind and caring person and totally deserving of his success.

“We wish him all the best for his promising future.”

Related Topics:ArtSwansea Bay NHS
Up Next