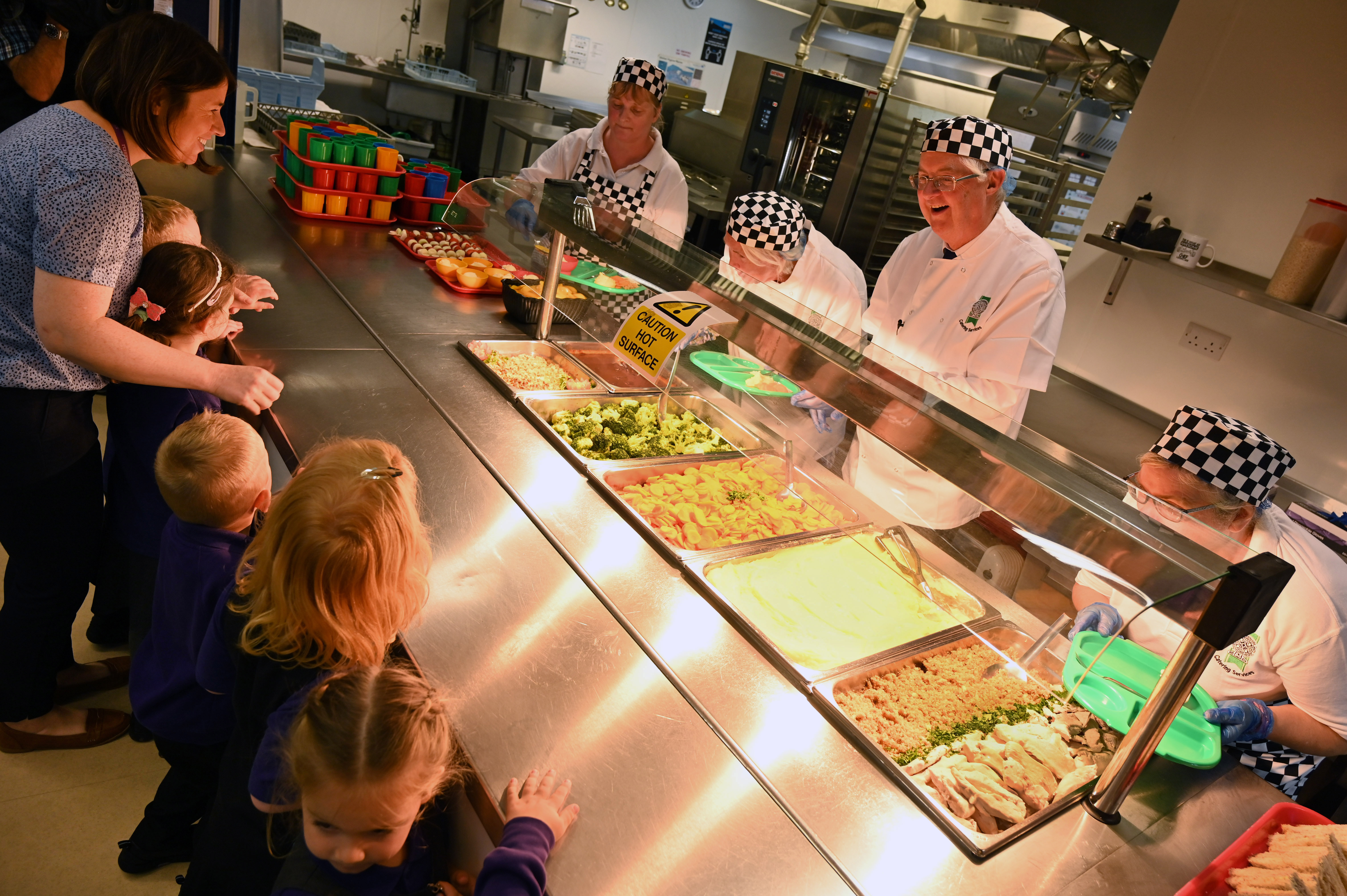 Welsh Labour First Minister Mark Drakeford and Plaid Cymru’s Siân Gwenllian visited Ysgol Bro Preseli in Crymych as part of a launch of a national scheme to roll out free school meals to the youngest learners in primary schools in Wales.

Known as the Universal Primary Free School Meals, the policy is part of the Co-operation Agreement between the Welsh Government and Plaid Cymru. However, the plan has been criticised in some quarters for being untargeted, with even the richest of parents benefitting.

The agreement will see free school meals extended to ALL primary school learners over the next three years.

First Minister Mark Drakeford said: “No child should go hungry. Families throughout Wales are under huge pressure because of the cost-of-living crisis and we are doing everything we can to support them. Extending free school meals to all primary schools is one of a number of measures we are taking to support families through this difficult time.

“I’m really pleased to see how our schools have embraced this and the speed at which they and our public services have worked together to begin providing free school meals.

“We know younger children are more likely to be living in relative income poverty, which is why the youngest of our learners will be the first to benefit.”

“Families are facing difficult times with the increasing everyday costs of living, so free, nutritious school meals for our youngest learners are great news,” he said. “No child should come to school hungry or be hungry during the day.

“We’d like to encourage parents of children in full-time nursery, reception and years 1 and 2 in primary schools to take advantage of this fantastic scheme from Welsh Government and Plaid Cymru.”

Ysgol Bro Preseli Headteacher Mrs Rhonwen Morris said: “As a school we aim to provide all learners with the same opportunity to thrive. We nurture learners from a young age; academically, socially and physically.

“We welcome such a progressive scheme ensuring that learners are provided with a nutritious balanced diet that will support all aspects of their education, progress and wellbeing.

“We look forward to seeing this scheme being extend to all primary school learners over the next three years thus ensuring equity for all in primary education.”

The scheme has not been universally welcomed however, with the Welsh Conservatives highlighting the spiralling costs of the scheme, and that the untargeted spending means that those that can afford to pay for school meals are getting them for free anyway.

Welsh Conservative leader Andrew RT Davies MS said: “Welsh Conservatives don’t think any child should go hungry, which is why we believe in targeting our limited resources and free school meals towards those who need help.

“However, Labour and Plaid’s universal plan is wrong because it includes millionaire families who can afford to feed their children, spending taxpayer money where it isn’t needed and absolves able parents of responsibilities when they can fulfil them.

“Labour and Plaid’s desire to chase headlines has also blinded them to the implications this would have for those from deprived backgrounds as it distorts how the Pupil Development Grant is allocated. If this goes ahead, we need a new formula to determine who needs that extra money.

“There is a cost-of-living crisis and we need every single penny of public funds to be targeted at where it is most needed, which Labour and Plaid’s blanket approach fails to do.”

Four Welsh councils were revealed to be expecting to overspent on their annual funding allocation in order to provide the universal free school meals.

Flintshire council expect to spend at least £1.8 million for 2022/23 which would exceed their capital funding grant allocation by over £500,000.

Monmouthshire Council has allocated an expected £1.6 million for kitchen refurbishments in their 31 primary schools as well as funds for an additional 21 kitchen staff and potentially 14 or more staff on top of this. This would represent an over £1.3 million overspend of their capital funding grant, so far.

Welsh Conservative Shadow Local Government Minister, Sam Rowlands MS said: “The Welsh Conservatives have argued against this policy on the grounds that a blanket, untargeted approach means spending taxpayers’ cash on feeding the children of those parents who can afford it.

“It seems from these figures that Flintshire, Gwynedd, Newport and Monmouthshire councils are set to overspend, frontloading the costs of this scheme in the expectation that future budget increases will cover the inevitable upcoming shortfalls, which is very distressing.

“The numbers so far do not add up, indicating that this is turning out to be yet another uncosted Labour project set to eat a hole in Wales’ budget and shred councils’ reserves, resulting in less money for other essential frontline services.”

Supermarkets to close for Queen’s funeral on Monday