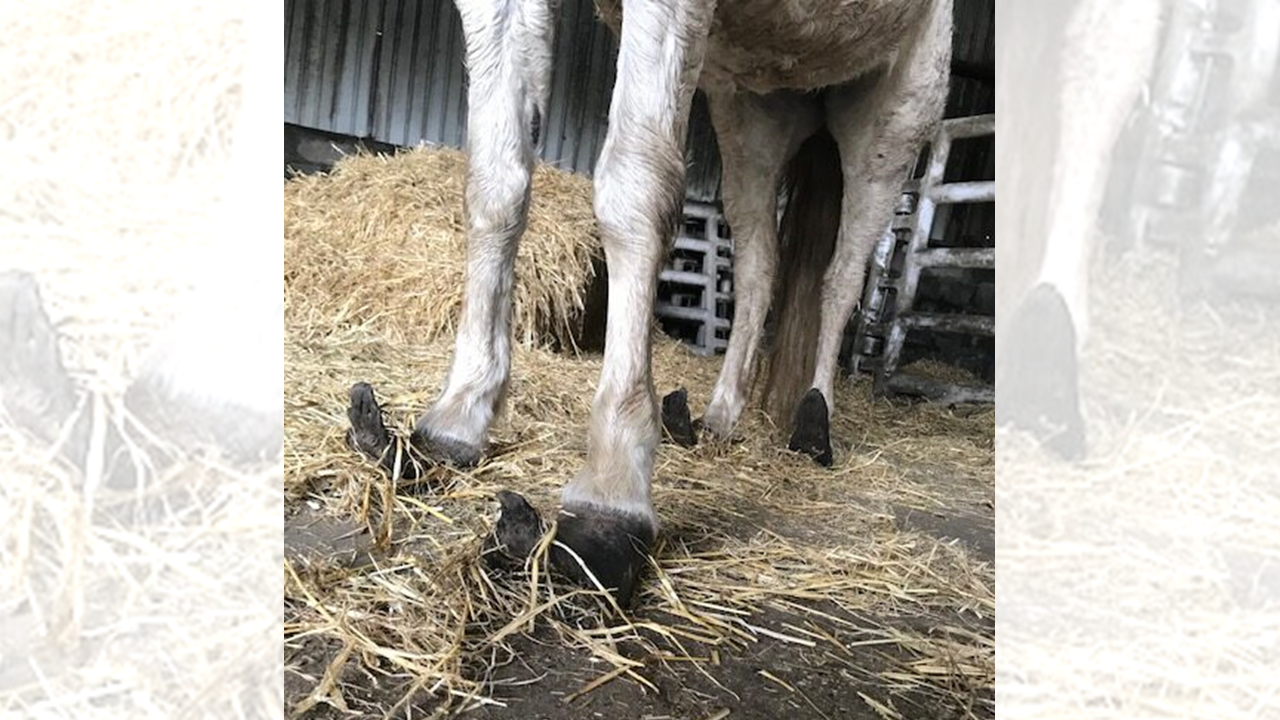 A Carmarthenshire man has been given an 18-week prison sentence, suspended for 12 months, after severely neglecting three horses, one of whom had hooves that were so overgrown that an equine vet said they hadn’t been trimmed for over three years.

Stephen Fanstone of Parcnewydd Farm in Pontyberem was also banned from keeping all animals for five years at Llanelli Magistrates Court on Thursday (6 October) following a prosecution by the RSPCA.

He had previously admitted three animal welfare charges at an earlier hearing last month but said he ‘hadn’t noticed’ the terrible state his animals had got into.

The court heard how RSPCA inspector Keith Hogben visited the farm on 6 April this year after being contacted by an officer from World Horse Welfare charity who had reported serious concerns about the welfare of three equines at Fanstone’s property.

There, inspector Hogben saw a chestnut gelding called Muffy and a grey mare called Rosie who were in very thin bodily condition with their hips, ribs and spines clearly visible. Rain scald and lice could also be seen on both animals.

Another grey mare, Lily, was overweight and had such severely overgrown hooves that they had curled up off the ground and resembled Arabian slippers.

A vet said the length of the hooves accounted for at least three years of growth and that Lily – who also had the extremely painful condition laminitis – had been neglected and caused unnecessary suffering for many years.

In his evidence to the court, inspector Hogben said: “The owner of the horses, Stephen Fanstone, arrived on site and I explained to him that the animals were in a terrible state.

“He told me he attended daily and did not notice how poor the horses were and that he had been unable to get a farrier. I explained to him that I thought all of the horses were suffering and that an equine vet was on their way.”

After examining the horses on site, the vet said it was her opinion that all three had been caused unnecessary suffering and needed to be removed. They were given pain relief so they could travel and were subsequently transported to a private establishment, with Fanstone signing all of them over into the care of World Horse Welfare.

The vet said: “After a brief assessment it was clear that all three horses showed signs of long-term suffering. Muffy had areas of hair loss and crusting over the body, in particular the base of the neck, inner thigh region and around the hocks.

“Lice were visible in these areas and there were clear signs of malnutrition. There was no evidence of an attempt to treat the lice infestation and I would estimate the period of suffering to be at least three months and most likely longer.

“Rosie had a poor coat over her entire body with obvious signs of malnutrition and there were signs suggesting the horse had been kept with inadequate shelter and no effort to treat her skin condition.

“Lily’s hooves appeared extremely overgrown and their condition was clearly inadequate. When questioned the owner had stated he had kept on top of trimming her hooves, but there was no evidence of recent attempts.”

Sadly, all three horses were in such poor condition that they were later put to sleep on veterinary advice to prevent further suffering.

In mitigation, Fanstone, who was also ordered to pay £400 in costs, a £128 surcharge and attend a 20-hour RAR, said he hadn’t realised how bad their condition was.

Speaking after the case, inspector Hogben said: “It would have been obvious to anyone who was attending to these horses that they all needed urgent veterinary treatment, and if this had been administered sooner, they may still have been alive today. The neglect of these animals was shocking, yet their owner thought there was nothing wrong with them when concerns were first raised with him.

“I’d like to thank World Horse Welfare officer Tony Evans for his assistance with this investigation and his ongoing work to support equine welfare across the region.”