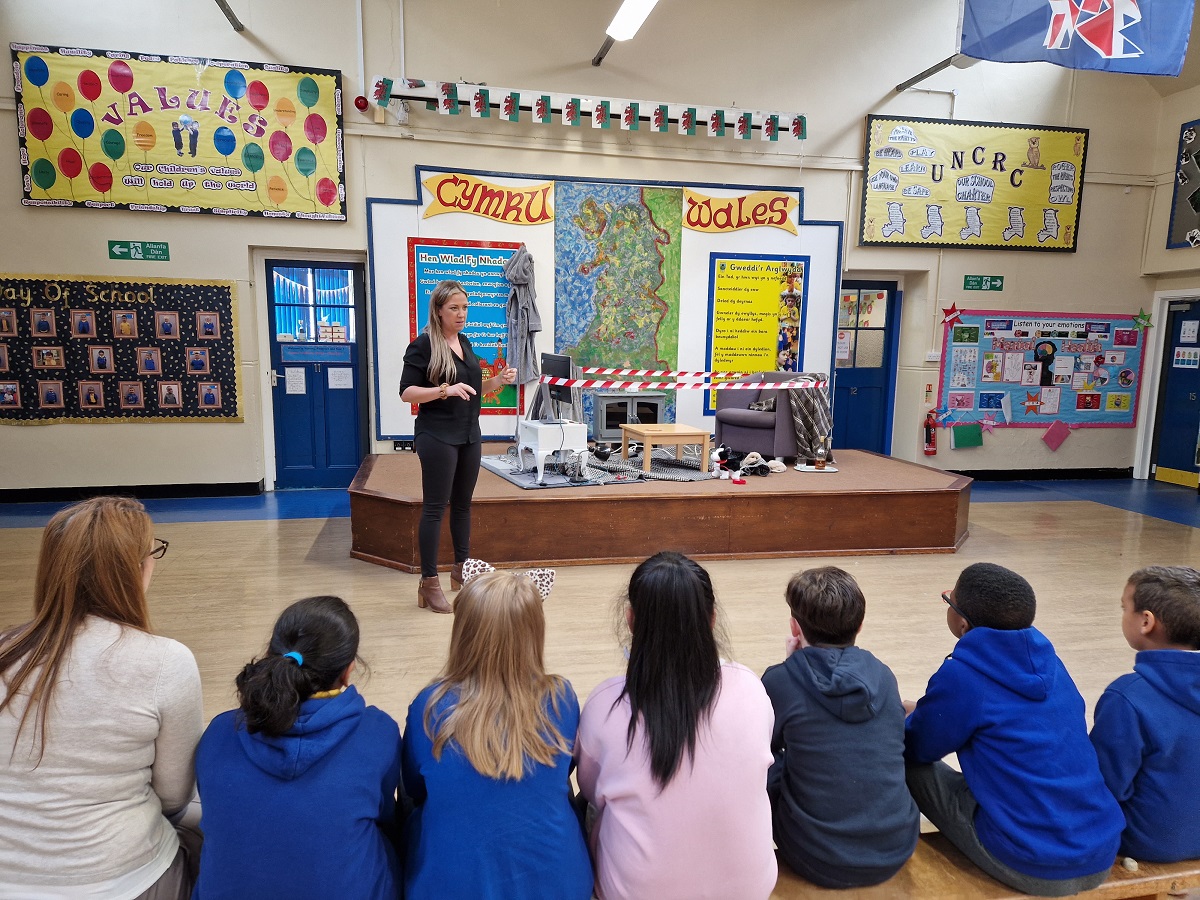 Pupils in Morriston Primary School have been examining a mock ‘crime scene’ in order to arrest the number of falls amongst the elderly.

The exercise was set up by Eleri D’Arcy (pictured above), Swansea Bay University health Board’s quality improvement lead for falls, as part of Falls Awareness Week.

Pupils were shown a replica living room containing numerous trip hazards including trailing wires, children’s toys strewn across the floor, blankets draped over furniture and a loose rug – all of which could have the potential to cause a fall.

It is hoped the pupils will now relay what they saw to their parents, grandparents and guardians, resulting in people – especially the elderly – taking greater care in their homes.

Eleri said: “Falls are a huge issue. More than 200,000 older people will fall in their own home this year in Wales. The impact of a fall on an individual can go far beyond a bumped knee. It can result in a lack of confidence, many then stopping activities or getting out, and as a consequence become weaker, leading to further falls.

“All the examples on display are really common. I’ve spent the last 20 years going to older people’s houses to reduce risks. All of these things I have personally seen in numerous settings, across all walks of life. They are very real, everyday hazards that we can all do something about.

“We are trying to get ahead of the curve and focus on preventative education, stopping a fall from happening in the first place.”

Eleri said the school visit had been a great success which the children had really enjoyed.

“It captured their imagination and they liked the interactive way of learning,” she said.

“Their creativity took the session to another level. The children treated it as a real crime scene, playing detective and deciding about a scenario that may have happened. This really embedded their learning, which is really good and just what we want.

“There’s a lot of deliberate falls risks in there and the children have been great at spotting them. It made them think about their own contribution to some of the hazards too – leaving their toys out when they go and visit grandparents for example. There have been a lot of children self-reflecting on their own behavior.

“There have been many hands up and there was lots of engagement. There was a great enthusiasm about the session and everyone said they were going to remember it and go and tell their loved ones about it.

“That’s key to this whole process. It’s an intergenerational project based upon the idea that children talk. They are our mouthpiece, the ones who are going to spread this message. Word of mouth and family community are sometimes the best way we can get that message across.”

Year 5 pupil, Isobella Flores, aged nine, said: “I learnt not to be messy. Looking at the crime scene I could see that someone could have fallen over the rug, or electric cables.

“I saw lots of hazards, there was a little dog running around, cables everywhere and dim lights, a blanket and rug.

“There were a lot of things. I think it’s important that we learn about this so that we don’t make the same mistakes.”

And fellow year 5 pupil, Ethan Baldock, also aged nine, said: “I learnt that there is a lot of dangerous stuff around the home. There’s lots of chances you could hurt yourself.

“There were wires, a dog leash and toys. If you stepped on a toy car it would move because of its wheels and you could fall over. If an older person falls over they can injure their bones. They are not as steady on their feet as they used to be.

“I’m going home to tell my dad, my mum and my brother all about it. I’m going to make sure my grandparents know about it as well.”

Year 4 and 5 teacher Llinos Davies said the pupils responded really well and had their own scenarios.

“They came up with some really good ideas. They already knew a lot of the hazards that you can find in a household and they enjoyed the interactive game. It was a really positive experience.

“I think they are going to remember what they learnt and will go home tonight and tell mum and dad and grandparents all about potential hazards in the home.”

Younger pupils were treated to a story aimed at spreading the falls prevention message. During the afternoon grandparents were invited to the school to join their grandchildren for a dance to health session aimed at improving their fitness and mobility.

Eleri said: “The children received a taster of a falls prevention programme available across Swansea. From seated exercises to learning how to stand safely to moving about the room and improving strength, balance and stamina – whilst being expressive, having fun and learning lots.

“The children enjoyed thoroughly and are enthused to go and tell their parents, grandparents, aunts and uncles all about how important it is to stay active as we get older.”

Matthew Bannister, deputy head teacher, said: “At Morriston Primary School we deliver a broad and balanced curriculum which engages with outside agencies and stakeholders of the school.

“We feel that engaging with Swansea Bay University Health Board and utilising the project that Eleri has run will benefit not only learners, but grandparents, parents and guardians.

“It’s a multigenerational project where learners have hands-on experiences and take on real life skills which are important for future generations.’’