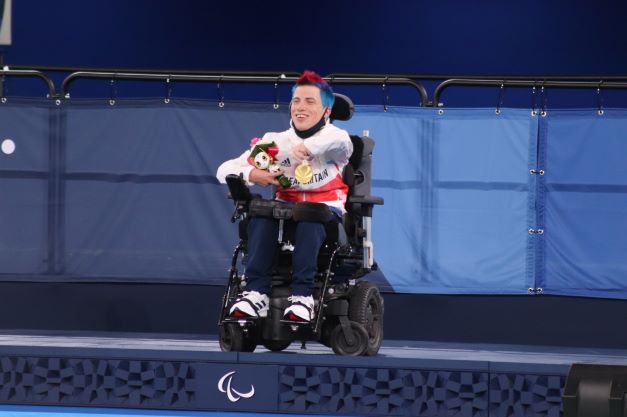 Three-times Paralympic gold medallist David Smith OBE is hoping that this weekend’s UK Boccia Championships will encourage more people across Wales to take up the sport.

Smith – who is from Eastleigh but has lived in Swansea for the last ten years – is the current Paralympic, World and European Champion. He retained his Paralympic title in Tokyo and became Britain’s most successful boccia player of all time.

He will be representing Great Britain at the LC Swansea as well as Swansea Community Boccia Club, the club which he first set up in 2009. He has breathed new life into the club this year, after the club paused during the pandemic, and is focussing on providing boccia for everyone.

“I’m really looking forward to the UK Championships,” said Smith. “It’s the first time it’s been held in Swansea, and the LC is my home training base. I’m very familiar with that and it should be a great atmosphere. It’s good training ahead of the World Championships in December but it’s also a chance for players in the pathway to compete against World Class Programme athletes.”

Smith has taken on the mission of encouraging new players into the sport and is passionate about nurturing local talents at the Swansea club:

“I’m hoping that those who have just started playing or those who fancy giving it a try will come along and be inspired. It’s a great opportunity to see boccia being played at a world-class level and to get to know the British players.”

The UK Championships will feature seven Paralympians. a number of World Cup athletes as well as up and coming players. Disability Sport Wales CEO Fiona Reid says that hosting the Championships in Wales is a not-to-be-missed opportunity:

“Hosting the Boccia UK Championships is not only a huge privilege, but also a mark of our commitment to do more – more for those not yet involved in boccia, more for those already involved and more for the sport.”

A key name to note on the entry list is World number two Claire Taggart from Larne in Northern Ireland. Taggart won silver at the European Championships last November and she returned home from the Povoa World Cup with two gold medals, having claimed victory in the individual BC2 competition as well as the team event, alongside David Smith and Will Hipwell.

“It’s always a privilege to represent Northern Ireland,” says Taggart. “The UK Champs always hold a special place for me as it’s where I was spotted by Boccia UK in 2014. I always look forward to seeing and playing new and upcoming players.”

Taggart might find herself up against her teammate Will Hipwell as well as Reshad Saraj and Kayleigh Haggo who have both represented Great Britain in recent months.

Scotland’s McCowan brothers, Scott and Jamie, will also take to the courts with parents Gary and Linda as ramp assistants. The Dundonald duo are tournament favourites in the BC3 competition alongside British team-mate Will Arnott from Reading.

Scott said, “We don’t get many opportunities to compete for Scotland so we always enjoy the British Champs. Scottish Boccia have always supported me and without them I wouldn’t have got into the GB squad.”

But it’s also worth keeping an eye on Salisbury’s Sally Kidson. At 17-years-old, she made an impressive British debut in August finishing fourth in the women’s BC3 competition at the World Boccia Intercontinental Challenger in Poznan, Poland.

European Champion Stephen McGuire from Lanarkshire is reigning European Champion and leads the BC4 entry list. Making a comeback from major injury earlier this year, McGuire will be expected to do well as will Bognor Regis’ Louis Saunders, who was Britain’s youngest Paralympic boccia player in Tokyo. They will be joined by a strong field of British pathway athletes.