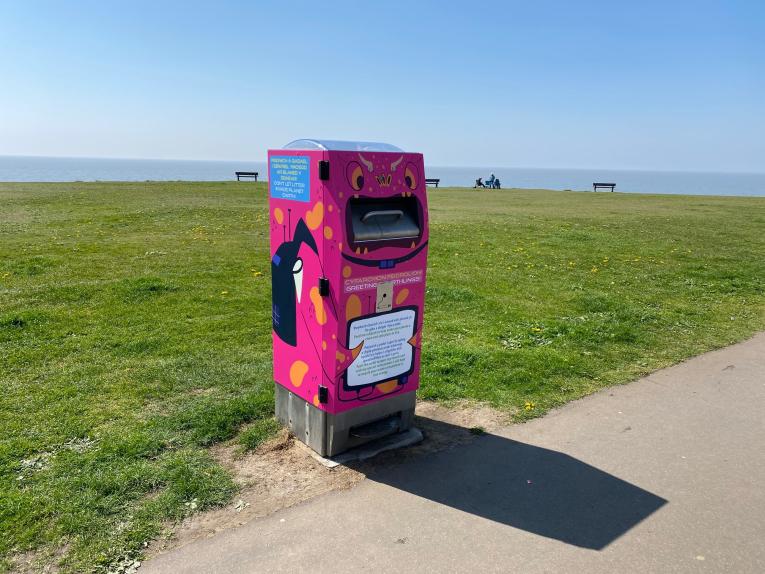 Earlier this year, five ‘cosmic visitors’ landed in Porthcawl to help keep the area clean and tidy and local schools have helped come up with some out-of-this-world names to give the solar powered bins.

In collaboration with Keep Wales Tidy, the solar-powered bins have been wrapped and are located across Porthcawl.

Before the summer holidays, five local primary schools spent some time coming up with the names and Mayor of Bridgend County Borough, Councillor Martyn Jones, had the tough job of choosing his favourites.

West Park Primary came up with the name ‘Ziggy’ for the bin located at Rest Bay.

Ysgol y Ferch o’r Sgêr named the bin on the Esplanade ‘Y Bin Hudol’ which translates to ‘The Magic Bin’.

Newton Primary came up with the name ‘Solar Squish’ for the bin located at West Drive.

Councillor Martyn Jones, Mayor of Bridgend County Borough said: “These high-tech bins are a bright and colourful way of encouraging visitors and residents alike to look after Porthcawl.

“It’s wonderful to see local schools getting involved with projects like this, and I hope it helps to discourage people from littering while also educating children about how we deal with waste and recycling.

“Choosing the winning names was particularly difficult as all of the entries were very clever and creative, but I think it is fair to say that the final choices are out of this world – well done to all concerned.”

As the bins are solar-powered, cleaner streets operatives will be alerted when they are nearly full, so they can be emptied regularly.

There are already enforcements in place to try and combat littering and if caught dropping litter in a public place you could be issued with a Fixed Penalty Notice of £100 under the Clean Neighbourhoods and Environment Act 2005.

Pam Bacon, Regional Manager Central West for Keep Wales Tidy said: “We are delighted that five new alien solar bins have moved into Porthcawl, this is a new, novel way to get everyone recycling the correct way.

“We have had a bit of fun on this trial and tried to come up with something a bit different that will hopefully capture everyone’s attention.

“We really hope they will inspire people of all ages to do the right thing.”