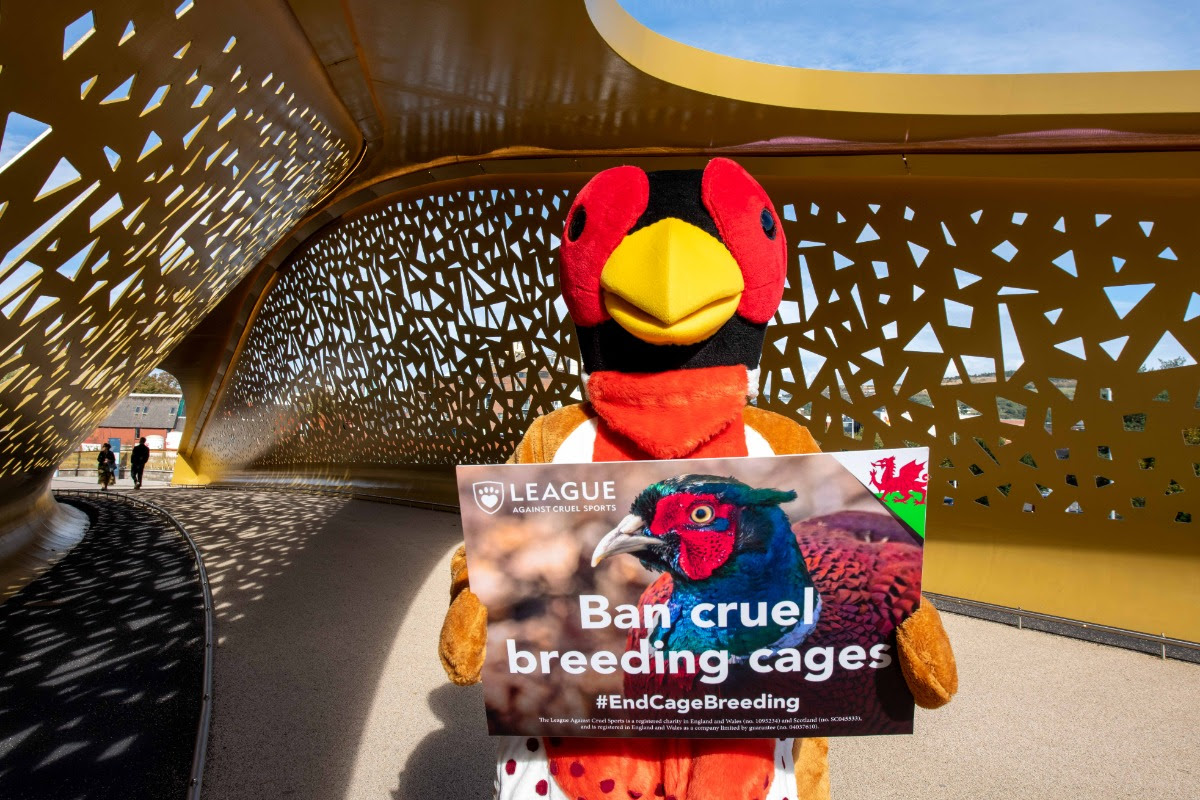 Campaigners from the League Against Cruel Sports held a family friendly roadshow in Swansea city centre on Sunday (16 October) calling on the Welsh public to back a campaign to end the cruel cage breeding of pheasants and partridges.

In the fourth of a series of events across Wales, volunteers and staff from the national animal welfare charity, including one in a pheasant costume, gathered on Oxford Street to encourage shoppers and local residents to contact their Members of the Senedd and urge them to back a ban on cage game bird breeding.

Billie-Jade Thomas, senior public affairs officer (Wales) at the League Against Cruel Sports, said: “We met and spoke with many lovely families and individuals from around Swansea today, visited some of the city’s landmarks, and the League pheasant brought a smile to many people’s faces.

“However, a lot of people were shocked at the cruelty and industrial scale of the caged breeding of game birds in Wales and took part in our action calling on their Members of the Senedd to help ban it.”

The roadshow follows a recent Welsh Government decision to ban snares – cruel wire traps used by shooting industry gamekeepers to target wildlife. It follows a League campaign to ban the manufacture, sale, possession, and use of snares in Wales.

Figures from the game bird industry show up to 90,000 pheasants and partridges are kept in cages for breeding purposes and produce eight million eggs a year. The birds that hatch are released into the countryside only to be shot for ‘sport’.

The cages are small and cramped and the birds are denied even the most basic welfare protections afforded to other farmed birds like poultry, such as minimum space restrictions.

Wales is home to Bettws Hall, the largest game bird farm in Europe.

Polling commissioned by the League and undertaken by YouGov in January 2021 shows 72 per cent of the Welsh public think using cages to breed game birds should be illegal.

Billie-Jade Thomas, added: “Wales has the chance to lead the way in animal welfare by being the first country in the UK to ban the cage breeding of game birds.

“It was encouraging to see so many people in Swansea sign up to our action to call on the Welsh Government to make Wales a cage free nation.

“The move to ban the use of snares will be popular among the public and illustrates a forward-thinking and compassionate stance on rural affairs and animal welfare by the Welsh Government. We hope it will influence other decision makers around the UK to follow suit.”